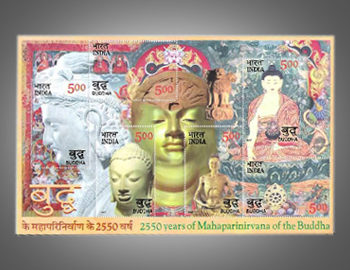 The Lumbini festival is celebrated in the month of December every year in Nagarjunasagar, Andhra Pradesh to commemorate the religion of Buddhism in the state. During the three-day long festival, several vibrant activities are conducted to highlight and promote Buddhism by the Andhra Pradesh Tourism Development Corporation. Thousands of tourists and pilgrims visit the state to witness the beautifully decorated Buddhist temples during this festival.

Lumbini is the place where Gautam Buddha, the founder of Buddhism, was born. The teachings of this revered master are remembered during Lumbini festival. Painters, sculptors and other artists get a chance to showcase their artworks related to the religion. Buddhism was the only prevailing religion in the state of Andhra Pradesh 2000 years ago. The great culture and traditions of the religion are highlighted during Lumbini Festival. Mintage World will take you through coins, postage stamps, and banknotes that celebrated Buddhism on them.

Gandhara Janapada flourished when Buddhism was at its peak. Click here to know more about Bent Bars – the Earliest Punch Marked Coins that were issued during that era.

Gautam Buddha was born as Prince Siddhartha around 566 BC to the King and Queen of Kapilavastu. Click here to know about Gautam Buddha and an Indian Stamp that was released to honour him as the 9th incarnation of Lord Vishnu. 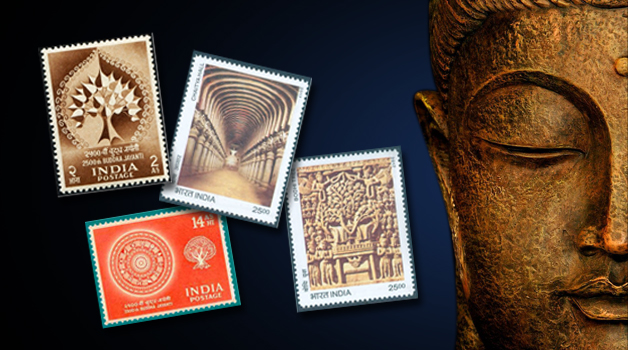 It is believed that Siddhartha Gautama attained enlightenment under a large tree called Bodhi Tree. India Post released a commemorative stamp featuring a Bodhi tree to celebrate the 2500th Buddha Jayanti in 1956.  Another stamp featuring a Round Parasol & Bodhi Tree was released in the same year.  Bodhi tree is also depicted on a sandstone relief sculpture in the Sanchi Stupa Complex in Madhya Pradesh. A 2017 stamp features this beautiful relief.

The Chaitya Hall of Karle, Maharashtra was built in 1st century BC and is covered in carvings depicting life and work of Buddha. This is among the largest rock-cut chaityas in India. A stamp released in January 2017 features the beautiful columns of this Hall.

Did you know that Gautam Buddha has been featured on World Stamps as well? Click here to know more about them.

It is amazing that through the study of coins, banknotes, and stamps one can gain so many insights about a specific topic of interest like Buddhism. Start building your collection now along with your knowledge!