Ever wondered how postage stamps are printed? That rectangular piece of paper stuck to your envelope is produced by a variety of techniques. Here are some of the main ones:

Master Die – The initial operation in the process of line engraving is making the master die. The die is a small, flat block of softened steel upon which the stamp design is recess engraved in reverse. Photographic reduction of the original art is made to the appropriate size. It then serves as a tracing guide for the initial outline of the design. The engraver lightly traces the design on the steel with his graver, and then slowly works the design until it is completed. After completion of the engraving, the die is hardened to withstand the stress and pressures of later transfer operations.

Transfer roll – Next is the production of a transfer roll that, as the name implies, is the medium used to transfer the subject from the master die to the printing plate. A blank roll of soft steel, mounted on a mandrel is placed under the bearers of the transfer press to allow it to roll freely on its axis. The hardened die is placed on the bed of the press and the face of the transfer roll is applied to the die, under pressure. The bed or the roll is then rocked back and forth under increasing pressure until the soft steel of the roll is forced into every engraved line of the die. The resulting impression on the roll is known as a “relief” or a “relief transfer.” The engraved image is now positive in appearance and stands out from the steel. After the required number of reliefs is rocked in, the soft steel transfer roll is hardened.

Plate – The final step in pre-printing production is the making of the printing plate. A flat piece of soft steel replaces the die on the bed of the transfer press. One of the reliefs on the transfer roll is positioned over this soft steel. Position, or layout, dots determine the correct position on the plate. The dots have been lightly marked on the plate in advance. After the correct position of the relief is determined, the design is rocked in by following the same method used in making the transfer roll. The difference is that this time, the image is being transferred from the transfer roll, rather than to it. Once the design is applied to the plate, it appears in reverse and is recessed. There are as many transfers entered on the plate as there are subjects printed on the sheet of postage stamps. It is during this process that double and shifted transfers occur, as well as re-entries. These are the result of improperly entered images that have not been properly burnished out prior to rocking in a new image.

Although the word “Typography” is obsolete as a term describing a printing method, it was the accepted term throughout the first century of postage stamps. The current term for this form of printing, however, is “letterpress.” As it relates to the production of postage stamps, letterpress printing is the reverse of engraving. Rather than having recessed areas trap the ink and deposit it on paper, only the raised areas of the design are inked.

For most letterpress-printed postage stamps, the engraved master is made in much the same manner as for engraved stamps. In this instance, however, an additional step is needed. The design is transferred to another surface before being transferred to the transfer roll. In this way, the transfer roll has a recessed stamp design, rather than one done in relief. This makes the printing areas on the final plate raised, called as relief areas.

In this process, the basic principles of photography are applied to a chemically sensitized metal plate, rather than photographic paper. The design is transferred photographically to the plate through a halftone, or dot-matrix screen, breaking the reproduction into tiny dots. The plate is treated chemically and the dots form depressions, called cells, of varying depths and diameters, depending on the degrees of shade in the design. Then, like engraving, ink is applied to the plate and the surface is wiped clean. This leaves ink in the tiny cells which are lifted out and deposited on the paper when it is pressed against the plate.

Gravure is most often used for multicolored postage stamps, generally using the three primary colors (red, yellow and blue) and black. By varying the dot matrix pattern and density of these colors, virtually any color can be reproduced. A typical full-color gravure stamp will be created from four printing cylinders (one for each color). Modern gravure printing may use computer-generated dot-matrix screens, and modern plates may be of various types including metal-coated plastic. 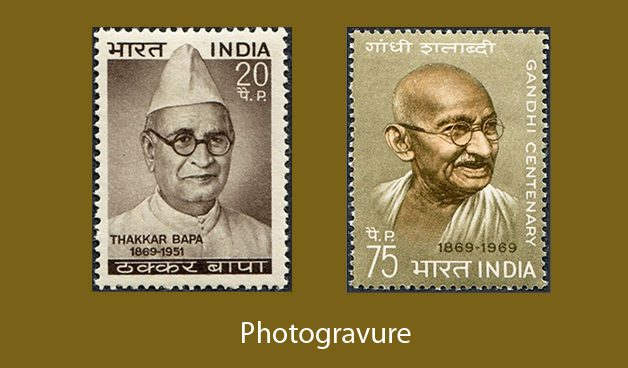 The principle that oil and water do not mix is the basis for lithography. The stamp design is drawn by hand or transferred from engraving to the surface of a lithographic stone or metal plate in a greasy (oily) substance. This oily substance holds the ink, which will later be transferred to the paper. The stone (or plate) is wet with an acid fluid, causing it to repel the printing ink in all areas not covered by the greasy substance.

Photolithography – The application of photographic processes to lithography. This process allows greater flexibility of design, related to use of halftone screens combined with line work. Unlike photogravure or engraving, this process can allow large, solid areas to be printed.

Offset – A refinement of the lithographic process. A rubber-covered blanket cylinder takes the impression from the inked lithographic plate. From the “blanket” the impression is offset or transferred to the paper. Greater flexibility and speed are the principal reasons offset printing has largely displaced lithography. The term “lithography” covers both processes, and results are almost identical. 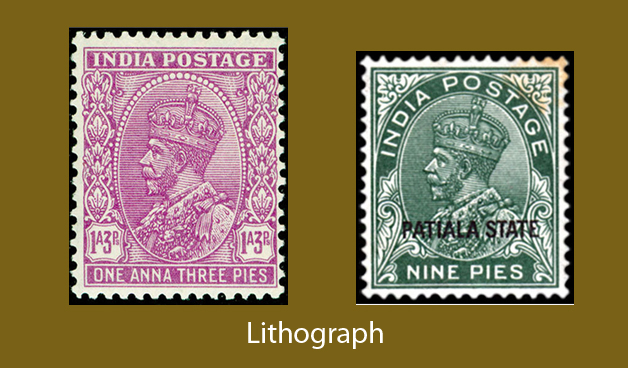 Embossing, not considered one of the four main printing types, is a method in which the design first is sunk into the metal of the die. Printing is done against a yielding platen, such as leather or linoleum. The platen is forced into the depression of the die, thus forming the design on the paper in relief. This process is often used for metallic inks. Embossing may be done without color; with color printed around the embossed area; and with color in exact registration with the embossed subject. 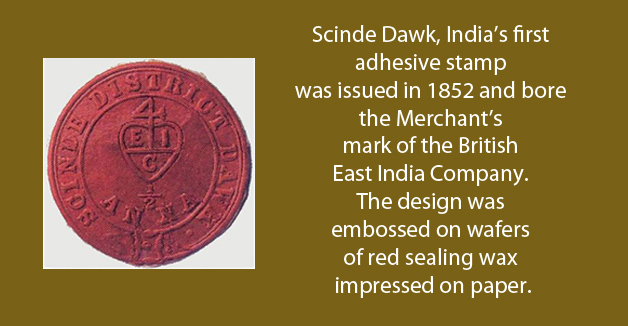 For objects to appear as holograms on postage stamps, a model exactly the same size as it is to appear on the hologram must be created. Rather than using photographic film to capture the image, holography records an image on a photoresist material. In processing, chemicals eat away at certain exposed areas, leaving a pattern of constructive and destructive interference. When the photoresist is developed, the result is a pattern of uneven ridges that acts as a mold. This mold is then coated with metal, and the resulting form is used to press copies in much the same way phonograph records are produced.

A typical reflective hologram used for postage stamps consists of a reproduction of the uneven patterns on a plastic film that is applied to a reflective background, usually a silver or gold foil. Light is reflected off the background through the film, making the pattern present on the film visible. Because of the uneven pattern of the film, the viewer will perceive the objects in their proper three-dimensional relationships with appropriate brightness. The first hologram on a stamp was produced by Austria in 1988.

A modern technique of applying color to postage stamps involves the application of metallic foil to the stamp paper. A pattern of foil is applied to the stamp paper by use of a stamping die. The foil usually is flat but it may be textured.

Want to know anything specific about postage stamps, coins or paper money? Let us know in the comments below and we’ll do the research for you. Stay tuned until then.

View all posts by Team Mintage World →
One thought on “How are Postage Stamps Printed?”