“karmanye evadhikaras te ma phalesu kadachana” – Doing your duty is your dharma and one must do it without expecting any rewards. This is just one of the 700 beautiful shlokas from the Celestial Song of the God – Bhagwat Gita, now imagine how magnanimous this sacred book of Hindus would be in entirety. The Gita helps you develop a deep understanding of life and how it should be ideally lived. Mythological accounts suggest that Bhagvat Gita was a part of Mahabharat which was narrated by Veda Vyasa and written by Lord Ganesha himself. Scholars believe that the Gita was actually written somewhere between 4th century to 2nd century BCE. Unlike Vedas and Upanishads, which were bound by words, those who recited the more popular Gita, made their own adaptations and changes. The earliest external form of Gita is close to Panini’s 4th Century grammar and it got a final form in the early 4th Century AD Gupta period. However, the exact date of Gita’s genesis is still unknown due to the dynamic nature of this text. Today is Gita Jayanti and it’s the perfect day to learn something about this collection of holy verses.

What is Gita Jayanti?

Gita Jayanti is observed with a lot of devotion and dedication for celebrating the birth of Srimad Bhagavad Gita, mainly in Kurukshetra, Haryana, on the 11th day of the waxing moon of Margaseersha month (December- January) in the Vedic almanac.

According to Mahabharata, Sanjaya informs king Dhritarashtra about the death of Bhishma and also starts recollecting details of the war. Gita begins before the start of Kurukshetra War. Arjuna realises that his enemies are his own beloved relatives, friends, and teachers while his charioteer, Lord Shri Krishna starts advising Arjuna on the battlefield. Lord Krishna’s advice to an emotionally disturbed Arjuna became a way of life for millions of people today. It has answers to all the questions in life.  It explains the concept of Dharma, Bhakti, Karma and Mokhsa in a concise and effective manner.

Kurukshetra is also the place where sage Manu wrote Manusmriti. The Rig Veda and the Sama Veda were also composed on his holy land. Gautama Buddha and famous Sikh Gurus also had visited this place as well.

How is Gita Jayanti celebrated?

Pilgrims from all over the country come to Kurukshetra for taking a bath in the holy waters of Sannihit Sarovar and Brahma Sarovar. Other activities organised over a period of one week by Kurukshetra Development Board, Haryana Tourism, District Administration, North Zone Cultural Centre Patiala and Information and Public Relations Department Haryana include shloka recital, dance performances, Bhagwad Katha reading, Bhajans, Dramas, Book Exhibitions and free Medical check-up camps.  Over several years, the event has become extremely popular and thousands of tourists visit Kurukshetra during this time of the year. 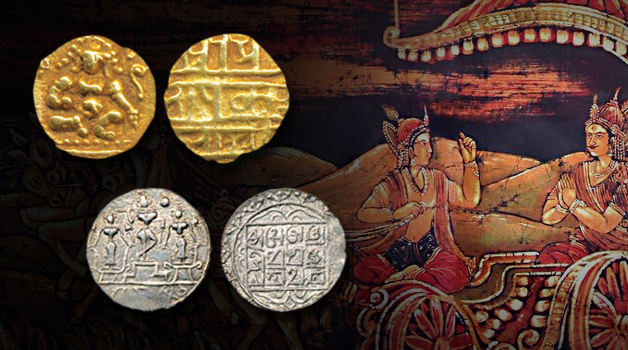 Several coins have been issued featuring Lord Krishna. One of the gold half pagoda coins issued by Krishna Devaraya shows a seated Balakrishna flanked by a conch shell and a chakra on the obverse. Nagari legend which is read as ’Sri Pratapa Krishna Raya’ is seen on the reverse. Click here to know more about these coins.

Ananta Manikya was the ruler of the Tripura kingdom from 1564 to 1567 CE. Manikya was the title given to the kings of Tripura Kingdom. One of the best specimens of his coins is the one which has Krishna on it. Click here to read more about these coins. 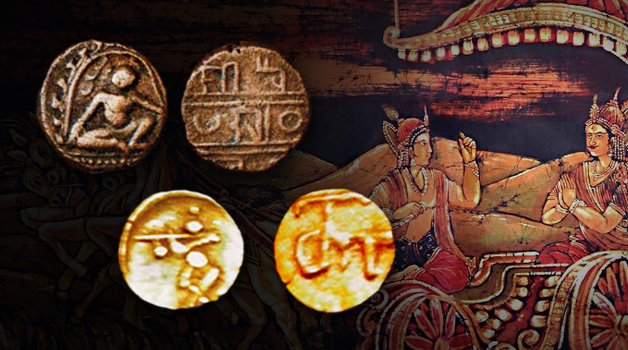 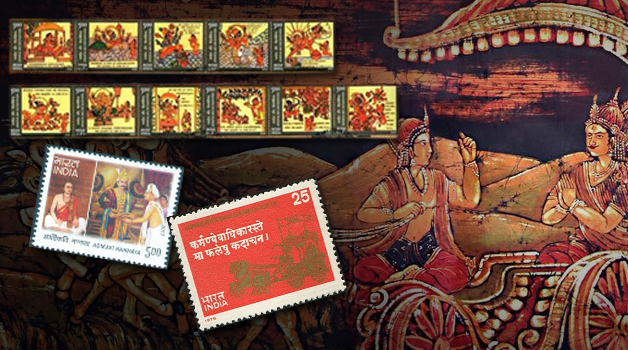 A commemorative postage stamp was issued on 25th of August 1978, featuring Krishna and Arjuna in the battlefield. Click here to view more details about the stamp.

On 1st November 2017, a 5 Rs postage stamp was released featuring the earliest known Telugu author Adikavi Nannaya Bhattaraka who also authored the first third of the Andhra Mahabharatam. Click here to know more about the stamp.

A set of 11 5-rupee stamps were released on 27th July 2009 to commemorate Jayadeva and Geetagovinda. The saint poet had composed Geetagovinda in Sanskrit in 12th century AD. The tune of Geetagovinda is used in classical dances and kirtans even today.

The verses of Bhagwat Gita are relevant even in this contemporary day and age. Today on Gita Jayanti, let’s all resort to good deeds for seeking enlightenment!