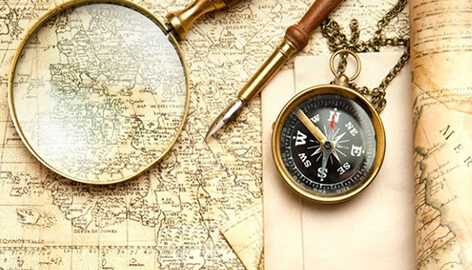 Throughout history, people have always wondered what was beyond the next mountain, ocean, river, or even planet. Explorers are people who have blazed the trail in going to new places. The Age of Exploration took place between the 15th and 17th centuries. During this time many countries in Europe sent out explorers to discover new lands, find trade routes, seek treasure, and gain territory for their country. During this time much of the world was mapped and many world civilizations came into contact with each other. Sometimes it is called the Age of Discovery. When Europeans first began sailing across the Atlantic Ocean, they were searching for new routes to China and the East, but what they found was more than they imagined: the New World. From Christopher Columbus to Marco Polo, take a look at these famous explorers Postage Stamps who made groundbreaking discoveries across the globe.

Here’s a list of 6 Famous Explorers Postage Stamps of all time:

Born in the Republic of Venice in 1254, Marco Polo, his father Niccolo, and his uncle Matteo crossed the Silk Road and reached China. His observations and discoveries are recorded in The Travels of Marco Polo. A book that described to Europeans the then mysterious culture and inner workings of the Eastern world, including the wealth and great size of the Mongol Empire and China in the Yuan Dynasty, giving their first comprehensive look into China, Persia, India, Japan and other Asian cities and countries.

His voyages and the famous Fra Mauro map of the world provided a lot of information to future explorers like Christopher Columbus. Though he was not the first European to reach China, Marco Polo was the first to explore some parts of Asia and to leave a detailed chronicle of his experience. This account of the Orient provided the Europeans with a clear picture of the East’s geography and ethnic customs and was the first Western record of porcelain, coal, gunpowder, paper money, and some Asian plants and exotic animals.

Marco was appointed to serve as Kublai Khan’s foreign emissary, and he was sent on many diplomatic missions throughout the empire and Southeast Asia, such as in present-day Burma, India, Indonesia, Sri Lanka and Vietnam. As part of this appointment, Marco also travelled extensively inside China, living in the emperor’s lands for 17 years and seeing many things that had previously been unknown to Europeans. Around 1291, the Polos also offered to accompany the Mongol princess Kokochin to Persia; they arrived around 1293. After leaving the princess, they travelled overland to Constantinople and then to Venice, returning home after 24 years.

Marco Polo has been featured on many stamps issued around the world. One of these stamps was issued by Monaco on the occasion of the 750th Birth Anniversary of Marco. This stamp of value 0.50 Euros depicts his portrait and Chinese landscape.

Christopher Columbus was an Italian explorer and navigator who are credited for discovering America in 1492. His Journey marked the beginning of the centuries of transatlantic colonization. In 1492, he sailed across the Atlantic Ocean from Spain in the Santa Maria, with the Pinta and the Nina ships alongside, hoping to find a new route to India. Between 1492 and 1504, Christopher Columbus completed four voyages across the Atlantic Ocean that opened a door to European exploration and colonization of the Americas.

Christopher Columbus started his career as a trader that helps him to learn how to make a map and Navigation Ships. He made three ships named Nina, Pinta, and Santa Maria, which he used during his voyages. One of his main objectives was to sail to the west until he reaches Asia (the Indies, especially India) which was very rich in gold, pearls, and spices.

Columbus was widely venerated in the centuries after his death. Many places in the Western Hemisphere bear his name, including the country of Colombia, the District of Columbia, and the Canadian province of British Columbia.

The US Postal Service and the Italian Ministry of Posts and Telecommunications jointly issued a block of four commemorative stamps on April 24, 1992, to honor the historic first voyage of Christopher Columbus in 1492.

The 29-cent US stamps feature the words “First Voyage of Christopher Columbus”. The designs depict Columbus pointing at something; possibly the expected landing place.

Born in 1460 in Sines, Portugal, Vasco Da Gama belonged to a noble family but never really liked luxury. Instead, he loved the sea. The fearless navigator was appointed to lead a Portuguese expedition to find a sea route to Asia in 1497. He finally discovered India for the first time on May 20, 1498, which was considered the longest ocean voyage of its time.

He was the first person to link Asia and Europe by ocean route, connecting the Atlantic and the Indian Ocean. He opens up the sea route from western Europe to the East by way of the Cape of Good Hope.

His Voyages to India; proven to be one of the instrumental movements in the history of navigation. He subsequently made two other voyages to India and was appointed as Portuguese viceroy in India in 1524.

He remains a leading figure in the history of exploration, and homages worldwide have celebrated his explorations and accomplishments. The Portuguese national epic poem, OsLusiadas, was written in his honour by Luis de Camoes.

To honour one of the most famous and celebrated explorers from the Age of Discovery, Maldives Postal Department has issued stamps in 2015. This stamp commemorates the event of the first European to reach India by Sea. 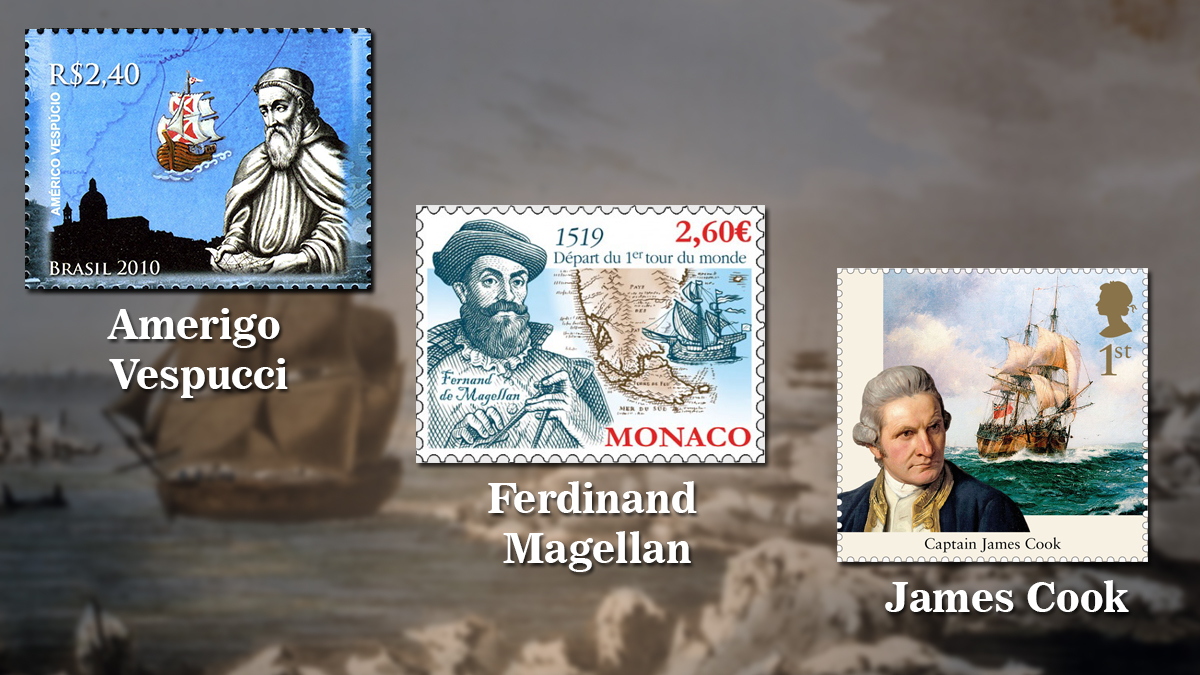 The Discoverer of the “New World’, Amerigo Vespucci was born on 9th March 1454 in Florence, Italy. America was named after him because he was the first person to say that the new world wasn’t the West Indies, but a new country.

In 1502, when Amerigo returned to Portugal, he told everyone of his beliefs. He said they had found a new continent between Europe and Asia, and so the new land was named after him ‘America’. In 1508 the position of chief of navigation of Spain (piloto mayor de Indias) was created for Vespucci, with the responsibility of planning navigation for voyages to the Indies.

Amerigo Vespucci made two voyages between 1497 and 1504. The first voyages he made on behalf of Spain were between 1499 and 1500. The second voyages he made for Portugal between 1501 and 1502. Later, between 1503 and 1505, two booklets were published under his name, containing colourful descriptions of these explorations and other alleged voyages. Both these publications were named extremely popular and were widely in Europe.

In 1931, Italy built a ship called the Amerigo Vespucci in honour of their explorer. In 2010 a 2.40real stamp was issued by the Brazilian Postal Department in memorial of Amerigo Vespucci and his travels.

Ferdinand Magellan was the Portuguese navigator and explorer who sailed under the flag of both Portuguese and Spain. He was a Portuguese explorer who organized a Spain expedition to the East Indies from 1519 to 1522, resulting in the first circumnavigation of the Earth, which was completed by Juan Sebastian Elcano.

Ferdinand Magellan was the first expedition to sail around the world. He also discovered a passage from the Atlantic Ocean to the Pacific Ocean that is today called the Straits of Magellan. As a traveller, Magellan had travelled to India by sailing around Africa. He thought that there must be a route to travel to the west and around America. The King of Portugal did not agree with Ferdinand Magellan and argued with him. Finally, Magellan went to King Charles V of Spain who agreed to fund the voyage.

Magellan was honoured on the stamp issued by the Monaco Postal Department on the occasion of the 500th Anniversary of the First Circumnavigation of the Earth.

On 18th January 1778, Captain James Cook, also known as Captain Cook, becomes the first European to travel to the Hawaiian Islands and called this island Sandwich Island. Captain Cook was a British explorer, navigator, cartographer, and captain in the British Royal Navy.

Captain Cook had made a detailed map of Newfoundland Island; before making three trips to the Pacific Ocean. While making a trip to the Pacific Ocean, he also made a record of being the first European to contact the eastern coastline of Australia and the Hawaiian Islands and the first recorded circumnavigation of New Zealand.

As a teenager, Cook was a part of the British merchant navy, after which he joined the Royal Navy in 1755. His incredible service to the Royal Navy in times of War was appreciated by the Admiralty and the Royal Society. He was appointed as the commander of HM Bark Endeavour for the first of three Pacific voyages in 1766. The first 3-year voyage which he undertook on ships named Discovery and Resolution in 1768 helped Europeans connect with Hawaii, Australia and New Zealand for the first time, making it a remarkable and historical feat.

Cook has been commemorated on the distinctive world stamp for collection. This stamp was issued by the Royal Mail; honour Captain James Cook for his achievements.

They say, unless you have explored, you haven’t done much in life. This blog “Famous Explorers Postage Stamps” celebrates noted Explorers from around the world along with their explorations and discoveries.

Learn more about some of history’s most famous explorers and their revolutionary discoveries in our next blog Famous Explorers Postage Stamps Part II.