Mahatma Gandhi New Series- 10 Rupees note:
A second major monetary reform came in November 2016 when the Reserve Bank of India withdrew the old Rs. 500 and 1000 value notes and introduced Mahatma Gandhi New Indian Currency Notes. Similar to the preceding series of banknotes, the obverse prominently displays the portrait of Mahatma Gandhi. The new 10 Rupees notes issued by the Reserve Bank of India have a motif of the Sun Temple, Konark along with the Swachh Bharat logo on the reverse. The base color of the note is chocolate brown and is of 123 mm x 63 mm dimensions. It was first introduced on 5th January 2018.

The security features of the new Mahatma Gandhi currency, 10 rupees note include a see-through register with denominational numeral 10, windowed de-metalized security thread with the text ‘Bharat’ (in Hindi) and ‘RBI’, novel numbering, latent image, and intaglio printing of the portrait of Mahatma Gandhi. 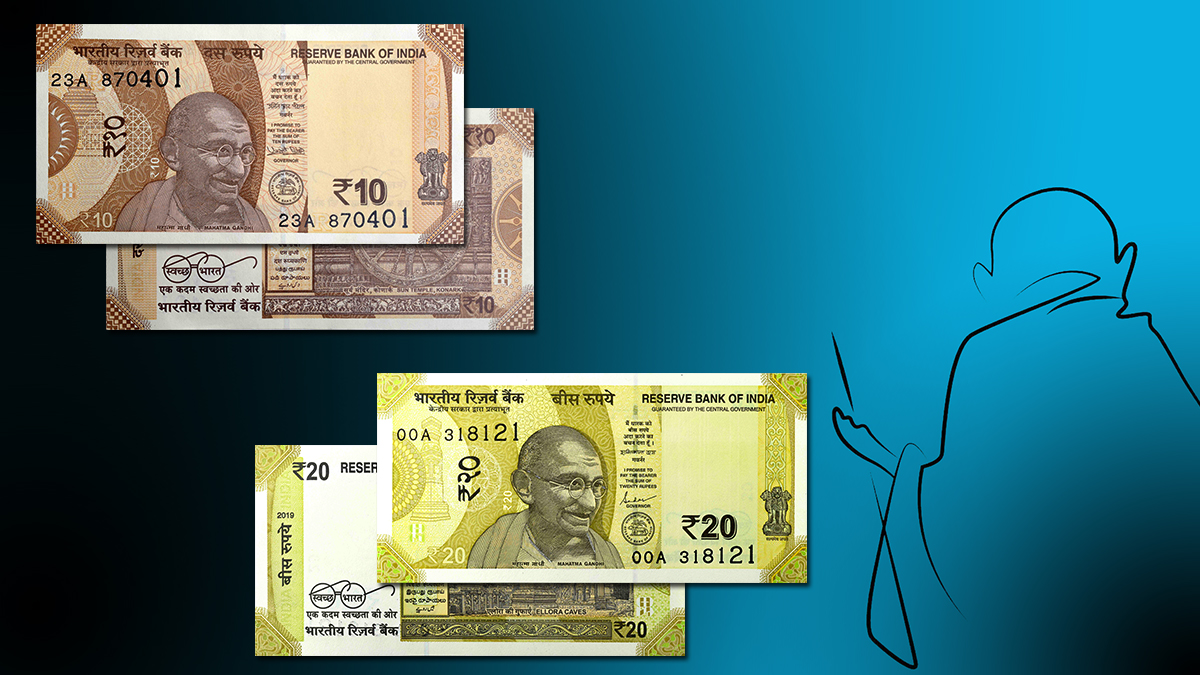 Mahatma Gandhi New Series- 50 Rupees note:
The Reserve Bank of India introduced 50 Rupees Mahatma Gandhi New Indian Currency Notes on 18th August 2017. Similar to the rest of the notes in the series, it bears a portrait of Mahatma Gandhi on the obverse. The reverse has a depiction of Hampi with a chariot suitably portraying India’s cultural heritage. The base color of the note is a beautiful florescent blue and is in dimensions 135 mm x 66 mm. 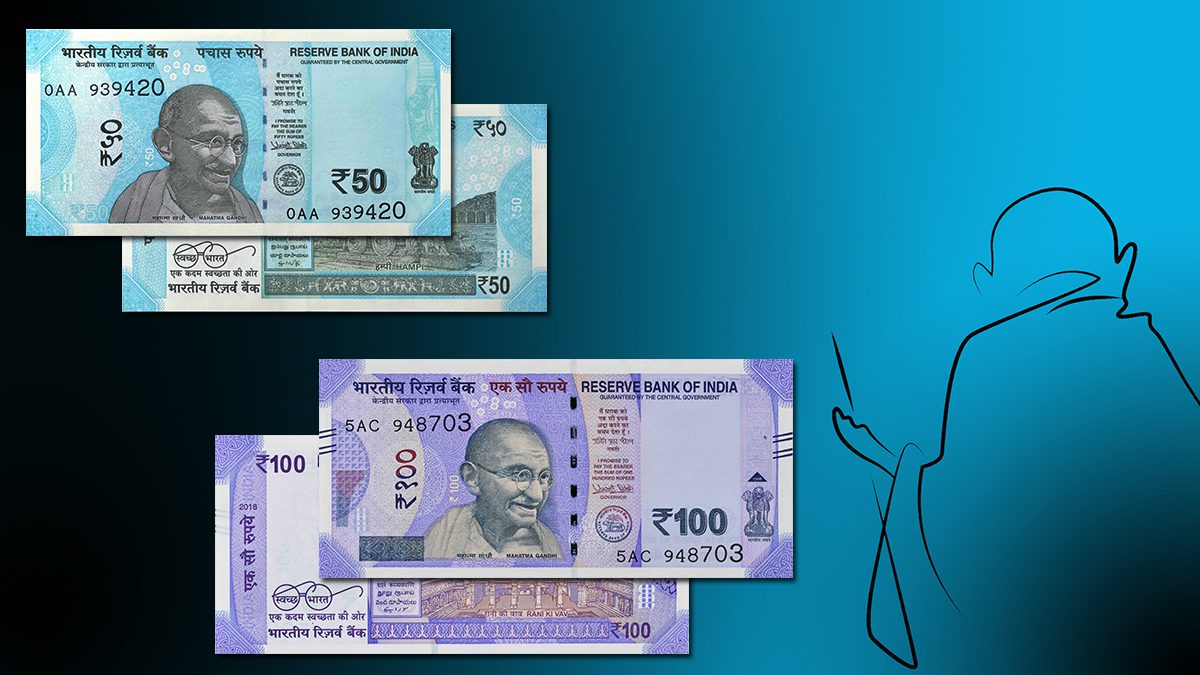 Mahatma Gandhi New Series- 200 Rupees note:
On 25 August 2017, the Reserve Bank of India introduced a new 200 Rupees banknote in the Mahatma Gandhi New Indian Currency Notes. In order to determine currency denominations, the RBI follows a variation of the Renard Series. Here a ‘decade’ or a 1:10 ratio is covered in three steps such as 1, 2, 5, 10, 20, 50, 100, 500, 1000, etc. The 200-rupees note is described as the missing link in the Renard Series by the RBI. Besides the Indian Rupee, Euro and British Pound sterling are two of the most notable currencies that are denominated in the 1-2-5 series. In March 2017, the decision to introduce 200 Rupees notes was taken by the Reserve Bank of India with the consultation of the Ministry of Finance. The note bears a portrait of Mahatma Gandhi in the front and an image of Sanchi Stupa on the back. The base color of the note is bright yellow. The dimensions of the note are 146 mm x 66 mm. 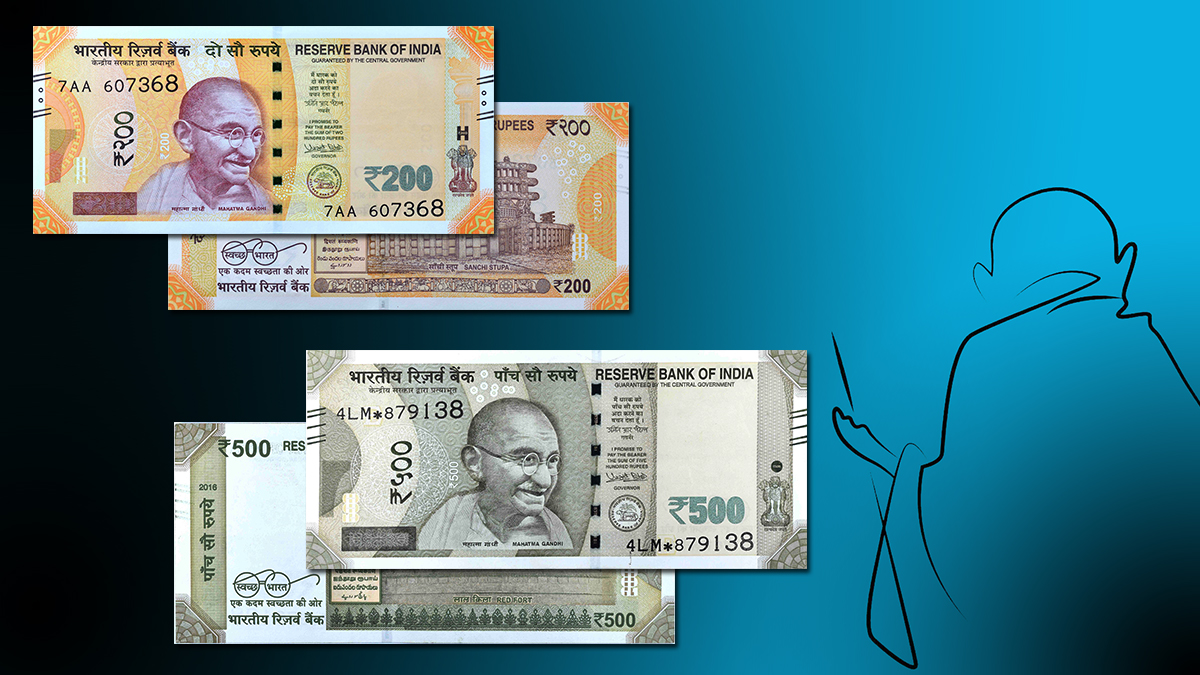 Mahatma Gandhi New Series- 500 Rupees note:
On 8 November 2016, Indian Prime Minister Narendra Modi announced the demonetization of the 500 Rupees banknotes of the new Mahatma Gandhi series notes as a measure to fight corruption in India and address the issue of counterfeit banknotes. Two days later, the previous banknote replaced a newly designed 500 Rupees note. The base color of the new currency of India 500 Rupees note is stone grey and is in dimensions 66 mm x 150 mm. The obverse features a portrait of Mahatma Gandhi as well as an Ashokan Pillar emblem with the signature of the Governor of the Reserve Bank of India. The reverse side has a motif of the Indian heritage site of Red Fort along with the logo of the Swachh Bharat logo.

Mahatma Gandhi New Series- 2000 Rupees note:
The 2000 Rupees note is currently the highest denominated note in circulation by the Reserve Bank of India. It came into active circulation on 10 November 2016, ever since the 1000 rupee note was demonetized in the same month. The new 2000 Rupees note is a 66 mm x 166 mm magenta-colored note. Its obverse features a portrait of Mahatma Gandhi, the Ashokan Pillar Emblem, and the signature of RBI’s governor. The reverse side features a motif of the Magalyaan representing India’s first interplanetary space mission, and the logo and tag line for Swachh Bharat Abhiyan. 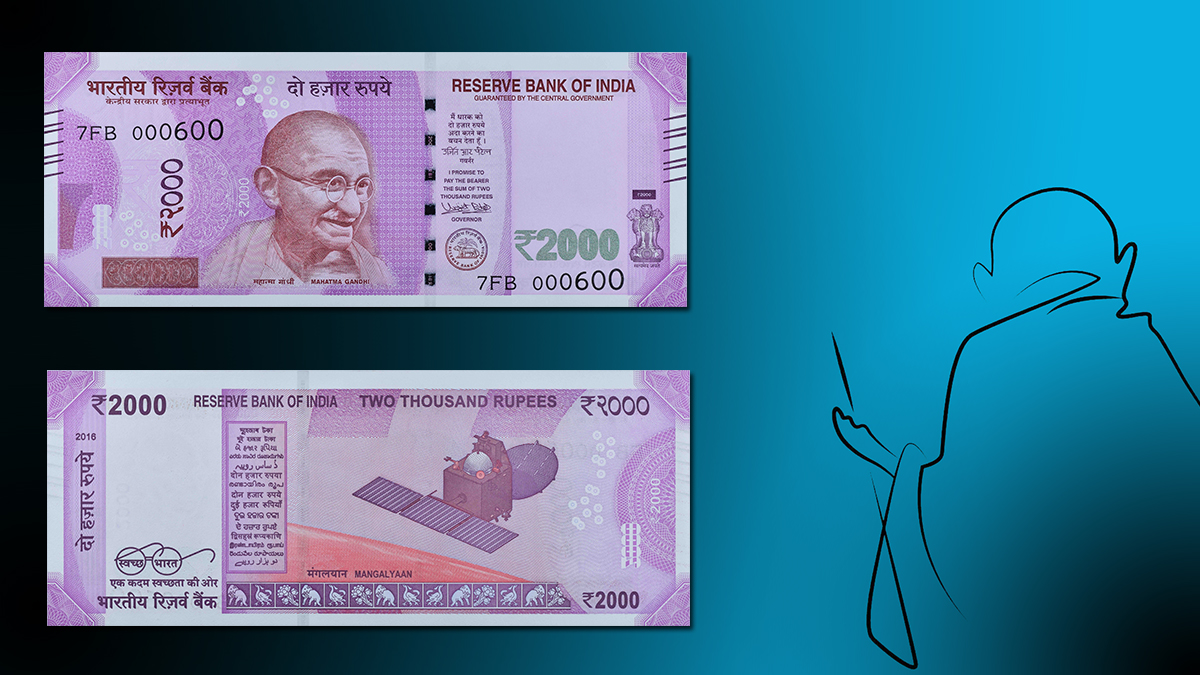 1 and 5 Rupees Specimen Note portraying Mahatma Gandhi:
After India’s independence in 1947, there was a need for a monetary reform on the Indian banknotes. It was proposed to replace the King’s portrait on the banknotes with that of Mahatma Gandhi. A specimen one and five rupees note was printed with Mahatma Gandhi’s portrait on the obverse. However, this design of New Indian Currency Notes was not approved and hence never released. Later the one-rupee note was issued with the Ashokan Pillar emblem in place of Gandhi’s picture.

10 Rupees pattern note of Mahatma Gandhi:
An unreleased ten rupees pattern note was printed with Gandhi’s portrait on the obverse. A picture near the watermark window portrays Gandhiji working on the charkha (spinning wheel). The reverse depicts a rear-side view of Mahatma walking with two of his followers. This new design banknote was not approved and hence never released into circulation.

Keep tuned to our online banknote museum and find more interesting Gandhi memorabilia. On this platform, you can also buy Indian banknotes online.