To respect and commemorate the people who have done great things for a world, stamps play a vital role. It is also a way to celebrate their life and commitment to the world. A personality that is featured on a stamp can be from any field. As you all know most of the Indian postal stamps are issued posthumously, but there are a few exceptions to this rule.

Dhondo Keshav Karve, also known as Maharishi Karve, was First alive Personality honoured on a stamp. He was a Social Reformer and an educator who worked tirelessly for the upliftment of women’s right in the society. He was well noted for supporting the education of women and for organizing associations for the remarriage of Hindu widows.

He broke down the orthodox Hindu opposition to widow remarriage, and he established the Widow Marriage Association in 1893. Moreover, he established an educational institution, Hindu Widows Home, in Poona, to help widows support themselves if they could not remarry. He also established Women’s University in Pune. Apart from that, Maharishi Karve did great work in the abolition of the caste system.

This Great Sage (Maharishi) of India lived for 104 years and on his 100th, Birth Anniversary government of India awarded him the highest civilian award – The Bharat Ratna in 1958. Also, a special commemorative stamp worth 15 Paise was issued to pay tribute to his work that incorporated a great change in today’s Indian society.

Also known as Sir MV, Mr Vivasvaraya was an eminent engineer, statesman as well as the Diwan of Mysore. Due to his outstanding contribution to the society, Government of India conferred ‘Bharat Ratna’. On his Birth Anniversary, he is remembered for his unforgettable contribution to his field. His birthday is celebrated as Engineer’s Day. He was honoured with a knighthood by Britain in 1915. Visvesvaraya Industrial and Technological Museum at Bangalore is named in his honour.  This influential personality became 2nd alive Personality to be honoured on a stamp.

He was awarded the “Bharat Ratna”, the nation’s highest civilian award, in 1962. His life has been truly inspiring for all Indians and we could not have asked for a more fitting and perfect personality to lead India into a fresh chapter of the nation’s glorious history! He became the 3rd living person who was depicted on Indian Stamps.

India Post has issued two stamps honouring the 1st President of Republic India. A 15 Naye Paise commemorative Stamp released in 1962 has his portrait and the other stamp issued in 1984 depicts our President sitting on desk signing documents!

The champion of liberalism, individualism and democracy, Dr Sarvepalli Radhakrishnan is one of the founding members of modern India. He was born in 1888 at Tiruttani in Madras. He also held the position of Vice-Chancellor in Banaras Hindu Univesity and was appointed Indian ambassador to USSR in 1949. His contribution in UNESCO at different capacities gave him a universal acknowledgement. Dr RadhaKrishanan was vice-president of India from 1952 to 1962 and President of India from 1962 to 1967.

After 1967, he retired from the active life of politics and lived in Madras until his death on April 17 in 1975. Dr Radhakrishnan was a committed philosopher, thinker and scholar, his spiritual idealism was influenced by the teaching of Vedantic tradition. He created new awareness amongst scholars about Indian heritage, both in India and abroad. To acknowledge this contribution to India and to celebrate the life of this great scholar, India Post has issued a commemorative stamp in 1989. He became the 4th alive Personality honoured on a stamp. 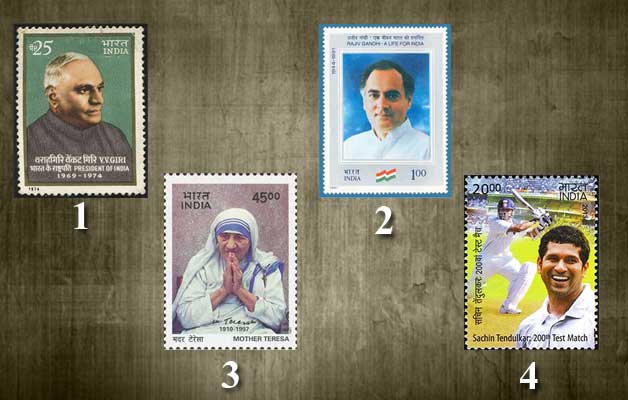 Varahagiri Venkata Giri, also known as V. V. Giri, was the fourth president of India from 24 August 1969 to 24 August 1974. He was born on 10th August 1894, in Berhampur, Odisha. Giri was a successful lawyer and political activist of the Indian National Congress. While studying law in Ireland, young Giri developed contacts with Irish leaders like De Valera, William Collins and was inspired by the revolutionary and trade union activities of the Irish freedom struggle.

His very first contact with Gandhi in London in 1914 brought a new turn to his life. Upon return to India in 1916 Giri enrolled at the Madras High Court. He also became a member of the Congress party, attended its Lucknow session and joined the Home Rule Movement of Annie Besant. Giri abandoned a flourishing legal career in response to Mahatma Gandhi’s call for a Non-Cooperation Movement in 1920. In 1922, he was arrested for the first time for demonstrating against the sale of liquor shops.

Later, he became Minister of Labor in the Central Cabinet. He was also appointed Governor of Uttar Pradesh, Kerala, and Karnataka. India Government honoured him with India’s highest civilian award, the Bharat Ratna. A commemorative postage stamp was on V.V Giri was released by the Indian Postal Department in 1974, after this, he became the 5th living person who was depicted on Indian Stamps.

Rajiv Gandhi was the youngest Prime Minister of India. He was a man with a modern outlook and clear vision. Under his leadership, India made gigantic leaps in the industrial, telecom and communication sectors. Perhaps the most outstanding legacy of Rajiv Gandhi was that he was able to put India into international focus and boosted India’s image in the international arenas. His revolutionary steps changed the Indian communication and Information Technology.

The introduction of Jawahar Rozgar Yojana and Panchayati Raj were other notable achievements of Rajiv Gandhi. Indian government conferred him with Bharat Ratna in 1991 and Revolutionary Leader of Modern India award in 2009 (at the India Leadership Conclave). He became the 6th living person who depicted on Indian Stamps (Date of Issue: 28 Dec 1985).

In 1950 she founded Missionaries of Charity in Calcutta. Today this charity consists of 1800 nuns, 250 brothers and thousands of lay co-workers who serve the sick and the poor in over 30 countries worldwide. Her enormous compassionate work evoked worldwide recognition. Due to this, she has received many awards like Padmashree, the Magsaysay Award, Pope John XXIII Peace Prize, John.F.Kennedy International Award, Jawaharlal Nehru Award for International Understanding, Nobel Peace Prize, etc. She became the 7th living person to be depicted on Indian Stamps.

Sachin Tendulkar the name says it all. God of Cricket, Master Blaster, Cricket Legend, these are just a few titles he has been given for his extraordinary performance. One of the greatest batsmen of the modern era and India’s most adored sportsperson, Sachin Ramesh Tendulkar was born on 24th April 1973.

His debut in 1989 was a fiery introduction to international cricket. Tendulkar received Arjuna Award in 1994 for his outstanding sporting achievement, the Rajiv Gandhi Khel Ratna Award in 1997, and the Padma Shri and Padma Vibhushan awards in 1999 and 2008, respectively, after few hours of his final match on 16 November 2013, the Prime Minister’s Office announced the decision to award him the Bharat Ratna, India’s highest civilian award. He is the youngest recipient to date and the first ever sportsperson to receive the award.

Tendulkar announced his retirement in December 2012. The legend walked away from the pitch after playing his final, 200thmatch against West Indies on home ground at Mumbai’s Wankhede Stadium in November 2013. The Master Blaster became the 8th living person who featured on a stamp.

These postal stamps enable us to pay tribute to individuals for their achievements while they are still alive to enjoy the honour.

So which one’s your favourite? Let the voting begin! Also, here is your chance to build your stamp collection with some fresh additions.