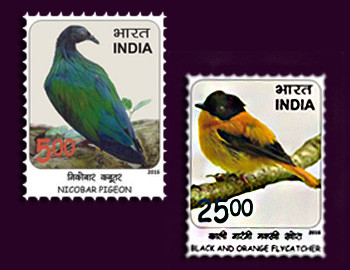 The subcontinent of India is blessed to be located geographically so strategically that, everything seems to fall in place for vibrant flora and fauna to thrive abundantly. India is home to hundreds of species of birds, most of which are native to certain regions and not much movement has been seen outside their homelands. Every species has a distinct habitat which they are accustomed to. Forests, mountains, coastal areas, marshy areas, plains, plateaus and cities, each one of them has their favourite breeding region, and India offers all that variety. Not just that, biodiversity of India can also be attributed to the fact that different parts of the country experience different climatic conditions. The more or less warm climate of India is what attracts migratory birds from all over the world. We had shared some interesting facts about these beautiful migratory birds that were featured on stamps of India in one of our earlier blog posts. On 17th October 2016, 4 stamps of India were issued, ranging from a denomination of 5 rupees to 25 rupees, depicting endangered birds of India. Let’s know a little about these flying beauties!

The Nicobar pigeon is mainly found in the coastal regions of the Andaman and Nicobar Islands, India, Malay, Solomons, Palau and Thailand. Their closest relatives are the extinct dodos. The head and the upper neck of this large pigeon is grey in colour which turns into green and copper hackles. The tail is pure white and short while the other parts of the body are metallic green in colour. They give out a low-pitched repetitive call and fly in flocks from island to island while sleep on offshore islets, safe from predators. They spend the day in areas where food is available in plenty. It uses gizzard to grind up hard food items. Unlike other pigeons, they fly in columns or a single file. The white tail serves like a “taillight”, keeping flocks together when they are flying over seas during times when the sunlight is low. These species build their nests in the forest on offshore islets in large colonies. The 2004 Indian Ocean tsunami has led to the major depletion of this beautiful bird. Nicobar pigeons are also hunted for food, and for their gizzard stone which is used in jewellery. They are sometimes trapped for the local pet market as well, but its trade has been considered to be strictly illegal. One of the recent stamps of India released featured this endangered bird!

The Nilgiri flycatchers live in the higher altitude shola forests of the Western Ghats and the Nilgiris. It has unique dark lores and a lighter shade of blue. There are two small white patches at the base of the tail. This small and long-tailed flycatcher is dark steely indigo blue in colour with some violet-blue colours on the forehead and darker lores. It makes an army to capture insects and returns to its nests on the lower storey or sometimes on top of the canopy. They sing with rich warbling notes by perching straight and generate the chipping note when they move their tail up and down. The breeding season is from March to June. The nest is built generally on earth banks, a tree hole, roofs or wooden parts of bridges. Take a look at one of the latest stamps of India which features the Nilgiri Flycatcher.

The black-and-orange flycatchers are found in the southern Western Ghats, the Nilgiris and Palni hill ranges in southern India. It is a unique species in its family with rufous coloration on its back. The male has a black head and wings while the female is dark brown in colour apart from a light eye-ring. No local movements of this bird have been spotted as of now and they prey on insects by flycatching low over the ground and also pick insects from the ground. Territories are maintained by a pair throughout the year. Whenever they notice a threat to their colony, the male points its bill up, fans the tail, opens its wings and produces “keet-keet” notes. The alarm call is a zit-zit. Females may also sometimes involve themselves for defence activities. The nest is placed in a low bush or ferns by females. During early mornings and evenings, they capture almost 100 insects an hour whereas at mid-day they hunt for almost half the number only. Recent stamps of India issued on 17th October features this lovely bird. Click here to view more details about the stamp.

Another endangered species of birds which is affected due to habitat loss and degradation! Experts have stated that many would get depleted in the near future.  But since their population is not restricted to a few locations, they are considered to be Near Threatened and their population should be carefully monitored. They prefer to live in tall evergreen forests and lowlands. Unlike other birds of the same family, they lack a white belly, they have a slate-grey plumage and a unique call. The male has a crimson forehead, crown and crest other parts are greyish-black. Their call starts with short bursts of “kuk kuk kuk” and ends with a whistled “kui”. They feed on ants, generally lives in pairs and are sometimes a part of loose family parties. They look for food on trunks of large trees or on main branches. Their best breeding time is from January to March and lay two eggs at a time inside 6–14 m nest holes in the trunk of dead trees or in large branches. Andaman Woodpecker has been featured on one of the latest stamps of India.

If you are someone who likes to follow themes while collecting, then your “Birds” theme cannot really miss out on these 4 majestic stamps of India.

Happy collecting, come back for more such informative articles on stamps, note and coins only at Mintage World!