“The lucid smoke drifts on the breeze,

The steaming pans are mantling white,

And thy blue wing’s a joyous sight,

Among the brown and leafless trees.”

– Excerpt from the poem “The Bluebird” by John Burroughs

Every human would have at some point in their lives, dreamt of flying. Touch the clouds freely without any shackles to hold back! Birds are one of the luckiest creations of nature who can spread their wings and live this dream in reality by exploring the expansive skies glimmering in the orange hues of the evening.

Thousands of bird species exist on earth, out of which some are termed as migratory birds. These nomadic birds embark on a journey during the cold winters in search of a warmer habitat. The warmer lands of India have been home to many of these beautiful migratory birds during winters. Today we take a look at five beautiful stamps of India depicting them. 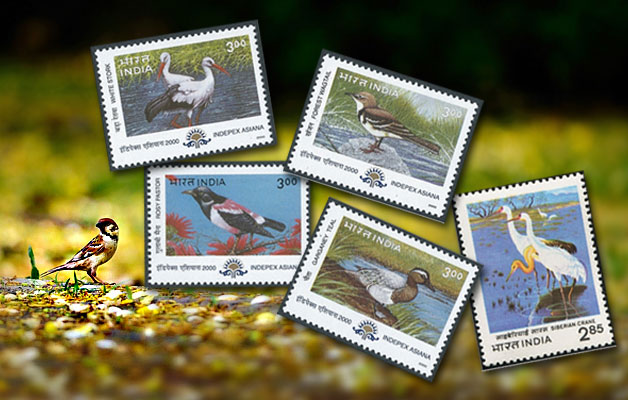 The Siberian crane or the snow crane, are white in colour with black primary feathers. They are found in the Arctic tundra of western and eastern Russia. The ones living in the eastern region migrate during winter to China while the western population to in Iran, India and Nepal. They cover the longest distances among cranes during migration. The face and side of the head are bare and red, the bill is dark, legs are pinkish and the iris is yellowish. Unlike other cranes, they do not have long tertial feathers. During breeding season, both male and female birds dip their beaks in mud and splash it on their feathers. Unlike other cranes, they do not call using trumpeting sounds and have a distinct goose-like high pitched whistling. Their numbers have drastically reduced in the 20th century due to hunting and polluted habitats. In 2010, 3,200 Siberian cranes were recorded and in western Siberia, only ten of them are left in the wild. Click here to view complete details about one of the stamps of India featuring Siberian Cranes.

The white stork has a white plumage and black marks on the wings. Adults have long red legs and beaks. Two of its subspecies breed in north Finland, northwestern Africa, east to southern Kazakhstan and southern Africa. They migrate through long distances from Sub-Saharan Africa to South Africa or in India. They do not cross the Mediterranean Sea when they fly from Europe or Africa. They instead fly over Levant in the east or the Strait of Gibraltar in the west, because over water, the suitable air thermals are not produced. The white stork is a carnivore which eats a wide range of insects, fish, amphibians, reptiles, small mammals and small birds. These monogamous breeders do not pair for life. They build a large stick nest which is used for many years. Changes in farming methods and industrialisation have resulted in their declining numbers in the 19th and early 20th centuries. Conservation efforts have led to their improved breeding in the Netherlands, Belgium, Switzerland and Sweden. They are related to many legends like the story of babies being brought by storks. Click here to view complete details about one of the stamps of India featuring White Stork.

The forest wagtail is known popularly for wagging its tail sideways unlike other friends of theirs who wag their tails up and down. It is the only wagtail species that build nests on trees and are found in forests mostly in East Asia. They migrate to India and Indonesia in winters. The back and crown are olive brown, and the wings are black with two yellow wing bars and white tertial edges. They also breed in parts of Korea, China and Siberia. They reach southern India and Sri Lanka via the Andaman Islands and are also sometimes found in Maldives. Click here to view complete details about one of the stamps of India featuring Forest Wagtail.

The Garganey is a small dabbling duck which breeds in Europe and western Asia,. Their entire population migrates to southern Africa, India (in particular Santragachi), and Australasia in winter. They rise easily from the water with a fast twisting flight. They breed in grasslands close to marshes and steppe lakes. The adult male has a distinctive brown head and breast with a white mark over the eye. Females can be identified by their frequent head-shaking when dabbling. The male uses a crackling mating call while the female can sometimes only manage a weak quack. The Garganey is listed under the Agreement on the Conservation of African-Eurasian Migratory Waterbirds (AEWA). Click here to view complete details about one of the stamps of India featuring Garganey Teal.

The Rosy Pastor got its name from the Latin word “pastor” which translates to “shepherd”. They have a pink body, pale orange legs and bill, glossy black head, wings and tail. The head feathers of the males get fluffed when the bird gets excited. They are found majorly in easternmost Europe to southern Asia. They migrate to India in states like Karnataka, Kerala, Tamil Nadu, Telangana and Andhra Pradesh apart from tropical Asian countries like Sri Lanka in winters. They are mainly found near agricultural lands and when grasshoppers and other insects are abundant, their numbers increase considerably. They also migrate to north-western Afghanistan in summer. Their entire world population can be found in Sri Lanka and India including the southern India during winters. Click here to view complete details about one of the stamps of India featuring Rosy Pastor

So when are you planning to add these to your collection of stamps?

Also, so what if you can’t fly like birds; let your dreams take flight and explore unexplored horizons fearlessly!