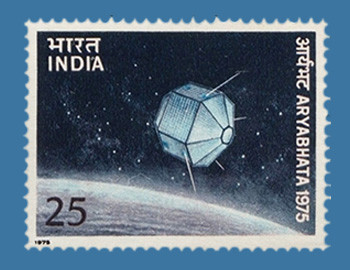 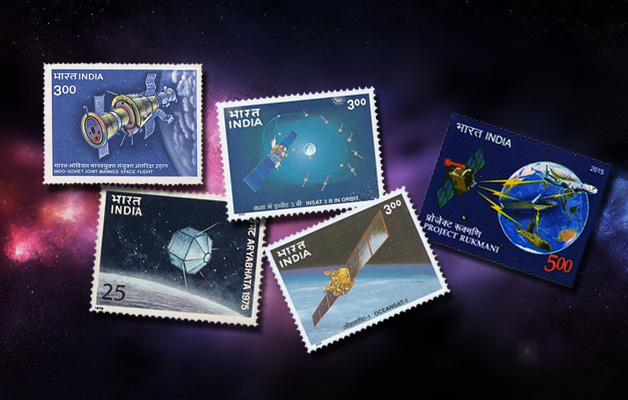 Named after the 5th century Indian astronomer and mathematician, Aryabhatta was the first satellite, built by ISRO, launched on 19th April 1975 from Kapustin Yar using a Kosmos-3M launch vehicle. An agreement was signed between India and the Soviet Union in 1972 which allowed the USSR to use Indian ports for tracking ships and launching vessels in return for launching Indian satellites. X-ray astronomy, aeronomics, and solar physics experiments were conducted using the satellite. All faces (except the top and bottom) were covered with solar cells. All signals from the spacecraft were lost after five days of operation due to a power failure. On 11th February 1992, the satellite returned on the Earth’s atmosphere. The satellite’s image also appeared on Indian 2 rupee banknotes between 1976 and 1997 and one rupee note. One of the stamps of India issued in 1875 features this famed satellite! Click here to know more.

The first multi-band dedicated military communications satellite GSAT-7/ INSAT-4F, also called Rukmini was launched early on 30th August 2013 on Ariane 5 ECA rocket from Kourou, French Guiana. The 2.5-tonne spacecraft’s antennae, including the ultra high frequency Helix antenna were deployed before it was stabilised on its three-axis in the orbit. After the satellite became operational in September 2013, the navy would not have to rely on foreign satellites like Inmarsat, which provide communication services to its ships. It is the last out of the seven 4th generation satellite launched by ISRO.  It enables secure, real-time communications between the navy’s warships, submarines, aircraft and land systems. It covers a large region on the eastern and western flanks of the Indian Ocean region, among others. After a flight of almost 34 minutes, the satellite was injected into a geosynchronous transfer orbit (GTO). When it comes to stamps of India depicting satellite, you can’t miss out on the rukmini 5 rupees postage stamp.

The ISRO-made Indian weather satellite INSAT-3DR, operated by the Indian National Satellite System provides meteorological services along with search and rescue information and message relay for terrestrial data collection platforms. The satellite was launched on 8th September on a Geosynchronous Satellite Launch Vehicle (GSLV Mk II) from the Satish Dhawan Space Centre. INSAT-3DR is an advanced version of the INSAT-3D with imaging System and an Atmospheric Sounder. It captures night time pictures of low clouds and fog, estimates Sea Surface Temperature (SST) with better accuracy and offers Higher Spatial Resolution in the Visible and Thermal Infrared bands. It also carries a Data Relay Transponder and a Search and Rescue Transponder. One of the 3 rupee postage stamps of India, features the INSAT3.

OceanSat-1 or IRS-P4 was launched by ISRO’s PSLV-C2 along with German DLR-Tubsat and South Korean KitSat 3 on 26th May 1999 specifically for oceanographic studies. It is a part of the Indian Remote Sensing satellite series and was mounted with Ocean Colour Monitor (OCM) and a Multi-frequency Scanning Microwave Radiometer (MSMR). The OCM monitors the colour of the ocean to document chlorophyll concentration, phytoplankton blooms, atmospheric aerosols and particulate matter. It detects eight spectrums from 400 nm to 885 nm. The MSMR measures sea surface temperature, wind speed, cloud water content, and water vapour content. It completed its mission on 8th August 2010 after serving for 11 years and 2 months. Oceansat was depicted on one of the stamps of India issued in 2000.

Salyut 7 was a space station in low Earth orbit from April 1982 to February 1991. It was first manned in May 1982 with two crew via Soyuz T-5, and last visited in June 1986, by Soyuz T-15. A total of 12 manned and 15 unmanned launches were aided by this space station. Salyut 7 was a part of the transition from “monolithic” to “modular” space stations and a testbed for docking of additional modules and expanded station operations. It was the tenth space station of its kind and the last of the Salyut Program, which was replaced by Mir. Apart from the many experiments and observations made on Salyut 7, the station also tested the docking and use of large modules with an orbiting space station. The modules were called “Heavy Kosmos modules” though in reality were variants of the TKS spacecraft intended for the cancelled Almaz military space station. They helped engineers develop technology necessary to build Mir. One of the postage stamps of India issued in 1984 features the Salut 7.

You might be feeling proud to know about India’s contributions towards Space research. Start looking out for these lovely postage stamps of India from other fellow collectors and own these pieces of pride in your stamp book.

If you want to know about Indian scientists then here’s something for you: