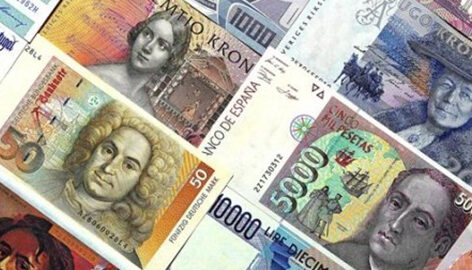 Throughout history, banknotes have always been designed in a way that matches consumer needs. We want our banknotes to generally fit into our pockets. But there are some which are so big that they won’t fit and some are so small that we are bound to lose them. Sometimes, however, our requirements for banknotes can change, and this can lead to innovations that we might not expect, such as exceptionally large or small notes. Let’s take a look at some of the world currency that is the largest and smallest banknotes ever printed throughout the history of paper money, providing insight into when and why these notes were created.

The invention of coins is considered to be one of the greatest inventions of man. However, an even greater invention is the discovery of banknotes. World currency notes are an invention of the Song Dynasty in China in the 11th century CE. During the Tang Dynasty (618–907 CE), however, merchants began to leave those heavy strings of coins with a trustworthy agent, who would record how much money the merchant had on deposit on a piece of paper. The paper, a sort of promissory note, could then be traded for goods, and the seller could go to the agent and redeem the note for the strings of coins. With trade renewed along the Silk Road, this simplified cartage considerably. These privately-produced promissory notes were still not true paper currency, however.

At the beginning of the Song Dynasty, the government licensed specific deposit shops where people could leave their coins and receive notes. In the 1100s, Song authorities decided to take direct control of this system, issuing the world’s first proper, government-produced paper money. This money was called jiaozi. This is how world currency came into existence.

From then to now so many currency notes have been handled by us on daily basis. Very few details are, however, known to us. A currency note is not just an image of Gandhi or its value, but a number of unknown facts are linked with this piece of paper. Here, at Mintage World, you will get familiar with this new and completely different world of paper currency. The best way to build a world currency collection is to focus on a particular theme. One can collect large-size types or lower denomination notes, star note collection, currency errors, or notes which feature famous people, animals, fishes, birds, boats, cars, trains, planets, etc.

Another way of assembling a meaningful collection is to use historical context as the main criterion. For example, you may decide to focus on collecting pre-WWII notes only. Or start a collection of World War II-era notes such as occupational, prisoner-of-war, propaganda, emergency, or local issues.

The easiest way to start your collection is to buy a “beginner set” of world notes. That way one can start a collection of world banknotes from a scratch and at a low cost without spending many days and weeks collecting one banknote at a time. One should be aware of currency prices in the market while purchasing. Also, the grade of a currency note is important. To determine what you should be paying for currency, you will need to know the grading system.

Handle your currency notes well. Try to avoid any direct contact with the currency. Whenever handling it, be sure to wear cotton gloves, and do not fold the currency. Storage is another important factor. It is best to store currency inside a currency “sleeve” which one can purchase from a local currency dealer. Be sure to keep the note in a dry place to prevent a build-up of moisture. Collecting currency notes is an equally interesting field to make a collection of. As far as World Currency Notes are considered, it is a whole new world out there.

Largest Banknotes in the World

The largest banknote ever printed originates from the Philippines, where, in 1998, government officials wanted to do something extra special to commemorate independence from more than 300 years of Spanish rule. The world’s largest banknote was issued, with a face value of 100,000 pesos and impressive dimensions of 355.6mm length and 215.9mm height.

The front of the note depicts the historic “Cry of Pugadlawin” – a historic act of defiance against the Spanish oppressors which signaled the start of the revolt against Spain in 1896. Led by Andres Bonifacio, a group of Filipino patriots gathered in Pugadlawin and tore up their Spanish-issued residence certificates in protest of Spain’s dominion over their land.

The reverse of the note depicts Filipino General Emilio Aguinaldo displaying a Philippine flag and proclaiming independence from Spain, as he did on June 12th, 1898. Therefore, the two sides of the bill symbolize the inception and success of the independence movement. Just 1,000 such notes were issued and were originally offered to collectors for 180,000 pesos ($4175 USD) each. 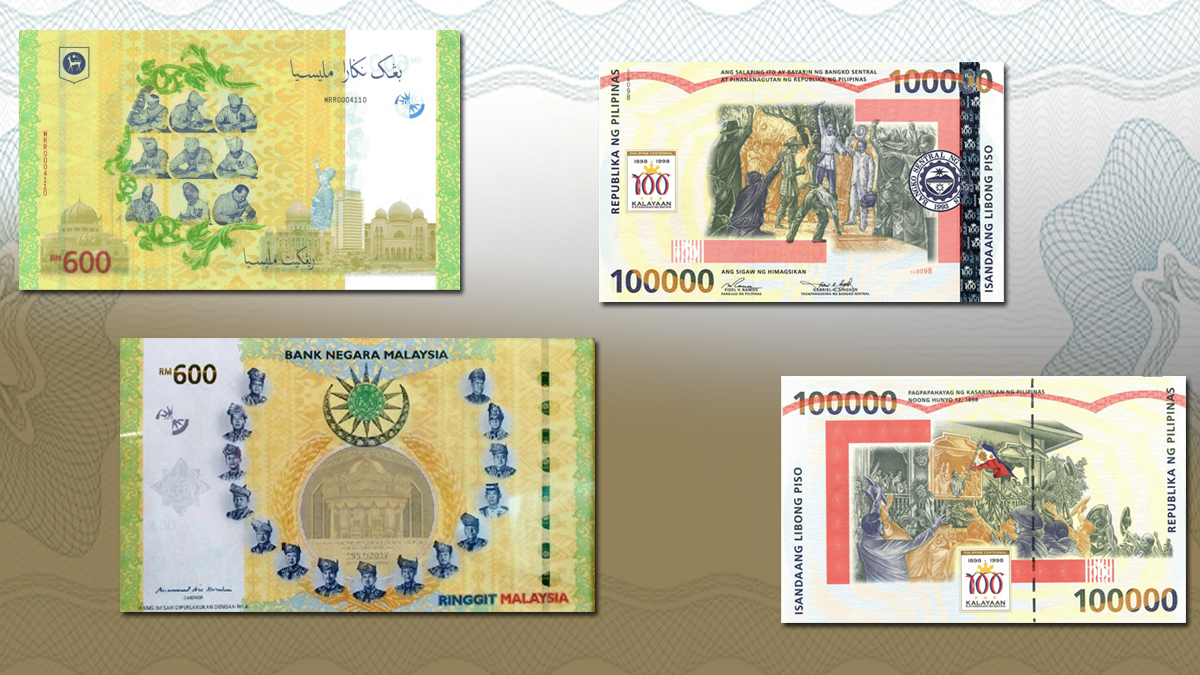 The title as of 2017 now belongs to Malaysia and the 600 Ringgit banknote! On the front is the throne with 15 of the Kings of Malaysia. On the reverse is the signing of the Federation of Malaya Independence Agreement.

Smallest Banknotes in the World

World War II led to many changes in currency policy around the world, as the war effort placed stressed on economies and the availability of materials. In India, for example, the British stopped printing coins entirely due to a metals shortage – all production of metals had been rerouted to support the war effort – and printed banknotes instead.

A similar thing happened in 1944, the height of the Second World War, in Morocco. Metal shortages led to a situation where no materials were available for the country to mint coins. As a result, Morocco initiated an emergency issuance of small-denomination cardboard banknotes in miniature sizes to address the lack of coinage that was bringing the economy to a standstill.

The little banknotes were released in denominations of 50 cents, 1 franc, and 2 francs, with the littlest one measuring just 31mm in height and 42mm in length. Today, Morocco has established a much more typical and stable monetary system with normal-sized notes, but the tiny banknotes of 1944 remain a popular collector’s item. 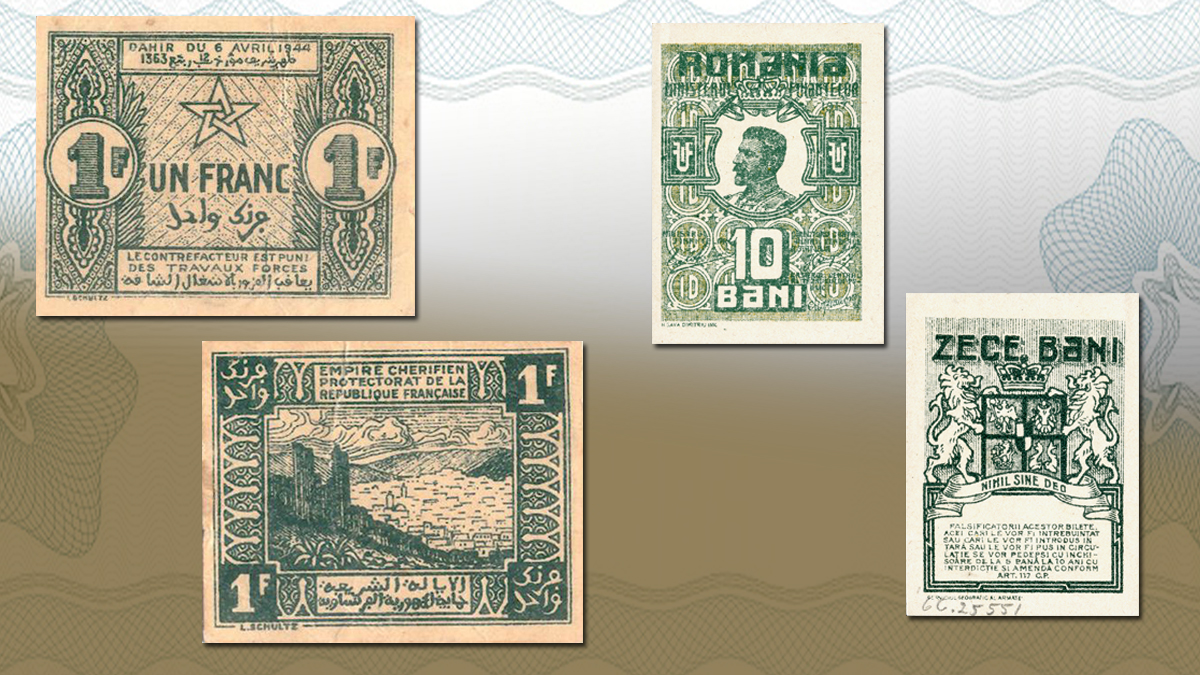 Although Morocco’s miniature notes of 1944 may have had smaller dimensions, the Guinness World Records book of 2008 listed Romania’s 10-Bani banknote, printed in 1917, as the tiniest banknote ever printed. Although there have been conflicting reports about the dimensions of the 10-Bani note, the actual dimensions are 38mm in length and 27.5mm tall – these banknotes are so small!

Like the Moroccan notes, Romania printed these after World War I as a response to metal shortages. Not only were they the smallest ever banknotes in terms of physical size, they also represent the lowest-denomination notes ever printed in Romania. The notes were printed to replace small coins, and they are divisionary notes (100 bani = 1 leu), so you would have needed ten of them to make up a dollar at the time.

The Romanian 10-Bani note from 1917 features the likeness of King Ferdinand of Romania, who reigned from 1914 until 1927. The reverse side displays the coat of arms of Romania. The notes can be purchased today for around ten dollars each and make a great novelty addition to any collection.

These banknotes are one of the rare world banknotes. Though they were once part of the circulation, such types of banknotes will not be or have not been printed on a regular basis which makes them rare banknotes of the world.