The presentation of monuments and buildings on ancient Roman coins is one of the most famous subjects in the study of coin iconography. In addition to numismatists, it has attracted the attention of historians, art historians, archaeologists, and topographers. Through Roman Coinage, we can see the consistent evolution of Roman architecture. Coin depicting Roman architecture is the most soughed after ancient coins around the world.  Not because of this attractive design but there are quite useful to reconstruct the appearance of buildings, temples, and monuments that no longer exist. The more coveted coins are one the depicting ancient structures that survive, the population of which is far smaller than the category of vanished structures.

One of the ancient Roman structures were built to supply water as it is an essential fluid for living organisms. The major civilizations on earth flourish near rivers like Indus, Tiber, Nile, etc. Thus, from different sources water was brought to the main cities through various means. The best example of water sourcing techniques was the Roman aqueducts.

Aqueducts are the bridges used for transporting water to the cities from distance water resources, it is also known as water bridges. The first Roman adequate was Aqua Appia. It was constructed in 312 BC by the co-censers Gaius Plautius Venox and Appius Claudius Caecus. The ancient roman coins depicted in the above-shown image featured the first aqueducts of Rome on its reverse side. It was issued in 56BC and depicts the bust of King Ancus Marcius, the legendary fourth king of Ancient Rome before the Roman Republic, on its obverse.

This water bridge covered approx. 16.4Km, nearly all its length was underground due to the height of the water source and for protection during wartime. Aqua Appia was the first test of Roman engineering and it’s was unsophisticated in comparison to Rome’s ten other aqueducts depicted on other roman silver coins. The Appia provided the city with an estimated 73,000 cubic meters of water per day.

Another example of the water transporting structure of Rome is Aqua Traiana, it is one of the brilliant examples of water management in ancient Rome. Rome had many brilliant structures for the support and welfare of their citizens and water being the essential and basic need gave birth to many fascinating engineering wonders. The aqueducts of Rome are well-known water bridges for the transport of water from the source to the cities.

In the 1st century, Emperor Trajan built an aqueduct. It channelled water from a source around Lake Bracciano near Rome. It fed a number of water mills on the Janiculum, some of these mills were put out of action when they cut the aqueduct in 537 CE during the first siege of Rome. 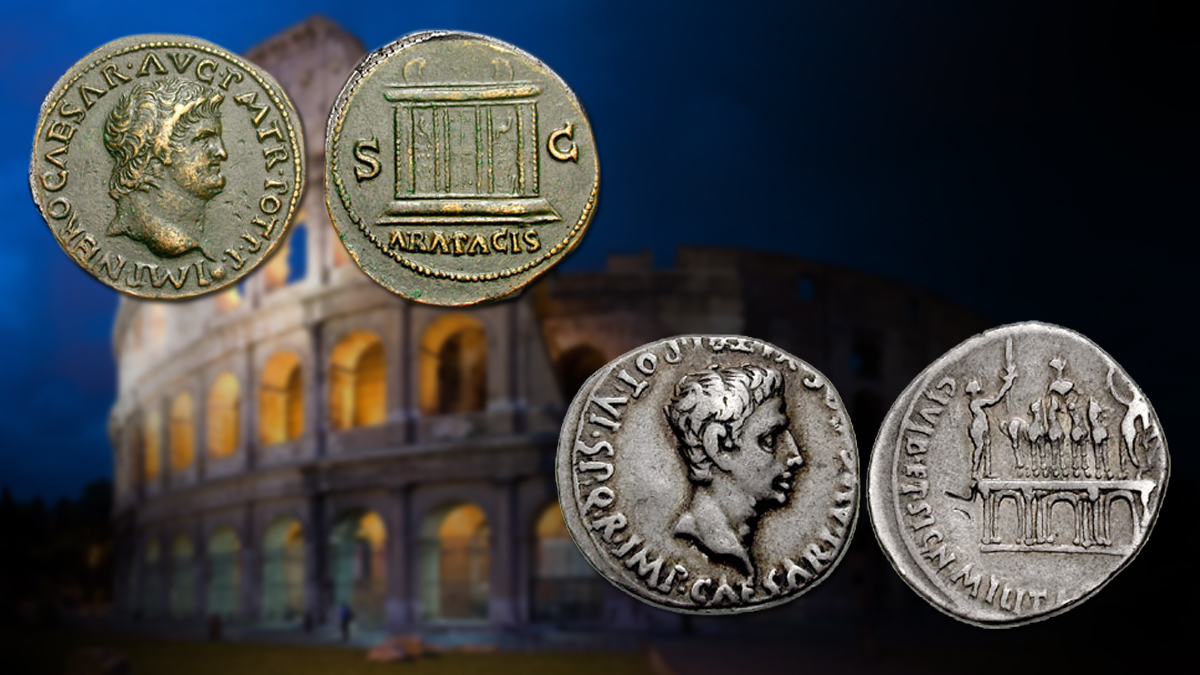 Other than public structures like water mills or town halls, Roman also built structures to hour their kings. The Ara Pacia, also known as Ara Pacis Augustae, was built in 13 BCE is such an example. It was built to honour the return of August to Rome after three years. It is an altar dedicated to Pax – Goddess of Peace. This monument is depicted on many ancient roman coins

It was built in the northeastern corner of Campus Martius, near the floodplain of the Tiber River. This altar is the Augustan vision of Roman civil religion. It depicts the abundance and prosperity of Roman peace. This monument serves a civic ritual function and simultaneously operated as propaganda for the Augustus regime.

This monument was constructed in the traditional open-air altar at the centre conversed by precinct walls finely sculpted in Luna marble entirely. This alter was commissioned to build by the Senate of Rome.

This monument appears on AS of Nero issued in 66 CE. The above-shown imperial roman coin depicts the front view of Ara Pacis on its reverse. The most obvious reason to depict this structure was to celebrate the achievements of Augusts. This structure also appears on the coinage of Domitian. Today this altar is relocated to the Museum of the Ara Pacis in 1938.

The Arc of Augustus also known as the Parthian triumphal arch was erected by Augustus in 19 BCE to celebrate the return of Roman military standards capture by the Parthians at the battle of Carrhae in 53 BCE.

This arch stood in the Roman Forum on the road between the Temple of Castor, Temple of Pollux and Temple of Caesar near the Temple of Vesta. This Arch replaced the Arch of Octavian built in 29 BC. Today very little of that arch remains but its connection to Emperor Augustus was proved by the inscription found in 1546 AD. Its appearance is known through the coins.

The above-shown silver denarius of Augustus illustrates the arch of Augustus, these very ancient roman coins are the best source to reconstitute the arch. It was a triple arch with a quadriga standing on the central arch. The construction of the triple was an unusual design in Rome. The obverse of this arch consists of the portrait of Emperor August. This arch served as a model for the Arch of Septimius Severus and the Arch of Constantine.

According to Stefan Ritter paper on ‘Buildings on Roman coins: Identification problems’: For a long time the interest in these premium coins images was motivated by the assumption that the architectural depictions reflect the appearance of the models quite accurately, allowing us to reconstruct buildings and monuments that have not survived the ages. It was only in the 1990s that a more differentiated approach started to gain ground. Inspired by the general visual or iconic turn, scholars started to ask questions about the role and function of coin images in communication processes.