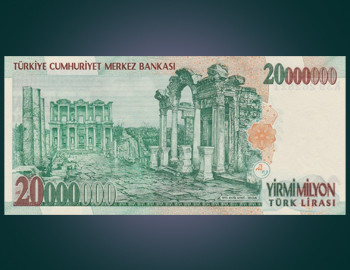 To explore, there’s a whole world out there! Did you know that some countries have depicted tourist places on banknotes?

Beginning since 1980, 27th September of every year is celebrated as the World Tourism Day. The goal was to create awareness among the international community about the importance of tourism and its social, cultural, political and economic value.

Tourism and economy cannot be separated, maybe that’s the reason why so many countries have boasted about their historical attractions and depicted some tourist places on banknotes. Each country has a beautiful and magnificent history and many awe-inspiring places. Here brought to you are some of the locally and internationally famed tourist places that adorned the banknotes.

The Treasury or Al Khazneh in Petra:

The exciting and nail-biting climax of the popular 1989 film: Indiana Jones and the Last Crusade features these elaborate temples in the ancient Edomite city of Petra, Jordan. The place which got instant fame after the Indiana Jones Franchises is depicted on the 5 dinar banknote of Jordan. Al Khazneh “The Treasury” is a structure carved out of sandstone and has classical Greek-influenced architecture.

The Ancient City of Ephesus in Selcuk:

A 20 million Turkish Lira note in circulation from 2001 to 2006 had the ancient city of Ephesus depicted on it. The note features the Library of Celsus in Ephesus & Temple of Hadrian on its reverse. This ancient Greek city built in the 10th century BC on the coast of Ionia lies today in Selcuk, Turkey. The ruins of Ephesus are a favourite international and local tourist attraction.

Portugal has a tourist place on banknote, an 18th-century palace located at Queluz and a canal is depicted on a 500 Escudos. This rococo or “Late Baroque” building was a summer home to Dom Pedro of Braganza. Later the Queluz Palace also became the official residence of the Portuguese prince regent. This majestic palace is often referred to as the Portuguese Versailles. Today the palace is a major tourist attraction and one of its wings is also used as a rest house for visiting heads of states.

The brand new Vietnamese polymer banknotes have various historic sites depicted on them. The current 200,000 Dong (VND) polymer note has the famous Ha Long Bay depicted on its reverse. The place is known for its emerald waters, towering limestone and island topped with rainforests. The other places depicted in the same series of banknotes are as follows:

VND 20,000 features the 400-year-old Chua Cau (Pagoda Bridge), a popular destination in the ancient town of Hoi An.

VND 100,000 has a thousand-year-old Confucius complex in Hanoi depicted on it. This complex is home to the Van Mieu, or the Temple of Literature, and Quoc Tu Giam – Vietnam’s first national university.

VND 500,000 banknote depicts a five roomed museum dedicated to its President Ho Chi Minh in the central province of Nghe An.

The Paraskeva Pyatnitsa Chapel is a Russian Orthodox Chapel. There are a lot of legends about the construction of this chapel. However, the chapel which adorns the 10 rouble banknote of Russia was built between 1852 and 1855. Since 1980 the building has become an architectural monument of local significance and major symbol of the city.

One of the UNESCO World Heritage Sites, the Tubbataha Reef Marine Park is featured on the 1000 peso note from the Philippines. The note also features a picture of South Sea Pearl. The new series feature on their reverse side some of the most beautiful tourist places on banknotes and other unique Philippine fauna. The other denominations feature other such tourist attractions in the Philippines like the Taal Lake and Volcano, Banaue Rice terraces, Majestic Mayon Volcano of Legazpi and etc.

Our world is filled with such wonderful places and the countries host to them are proudly depicting their natural, cultural and architectural heritage on the currency notes. We are sure, those of you struck with the wanderlust must have come across much more of such examples.

By the way, have you noticed, our Indian notes too have featured many of our historical masterpieces on them? Know more about them here. And read about the tourist attractions on the Chinese notes over here.

Travelling is the only way where you get rich by spending. So what are you waiting for? Buy the ticket and take the ride!

If not that, grab these currencies and enjoy the wonders of the entire world. Happy World Tourism Day!

View all posts by Team Mintage World →
One thought on “World in your pockets: Tourist places on Banknotes!”