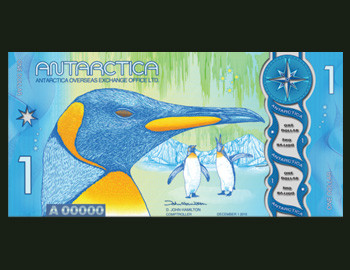 There’s very little that’s left to be explored or exploited in the world today. Antarctica is thankfully one such place where the power and beauty of nature precede that of humans – a species which boasts of being the most superlative of all. A heavenly place like this should rather be left alone for being pristine and away from the polluted dual minds and deeds of us. But having said that, let’s find out what makes Antarctica so beautiful. Get set to take a chilly ride. A real chilly one!

This part of the world has a very old history but without any human traces at all. And for some reason, that’s why it is far more beautiful than a country which has a rich history of human settlements or civilizations from thousands of centuries. 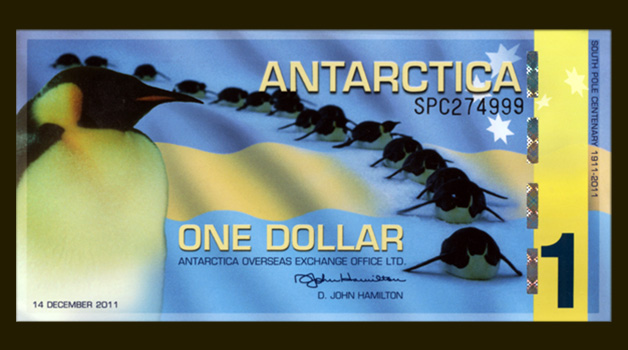 Celebrating the 100th anniversary of Albatross Amundsen reaching the South Pole is a 1 dollar banknote issued in 2011 featuring penguins. 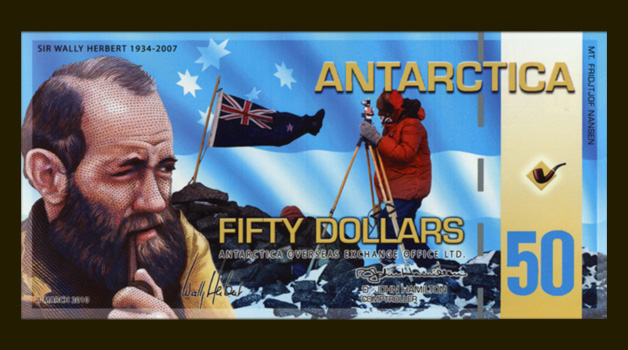 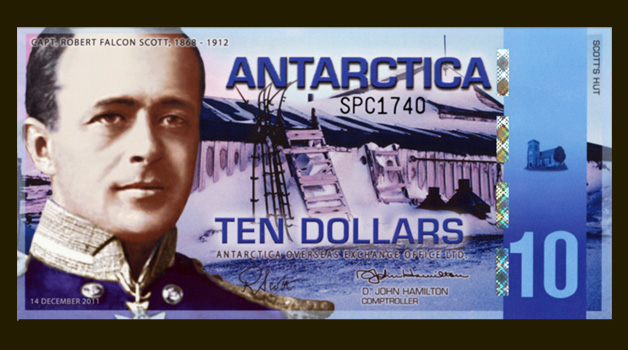 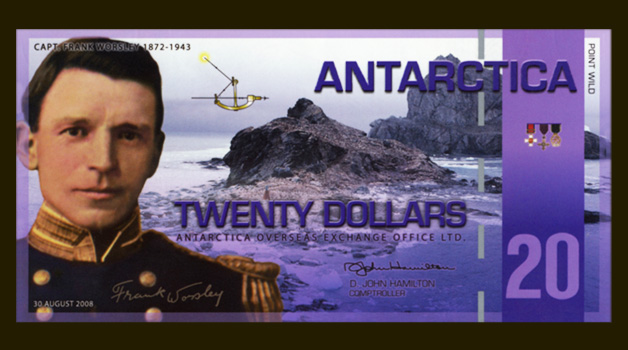 Even before humans evolved, Antarctica was a part of a larger land mass called Gondwana at the South Pole. But it split from Australasia and South America after which there haven’t been any land bridges to Antarctica for around 35 million years, keeping it isolated till today.

It is said that humans evolved in East Africa 5 million years ago and started moving across all of the continents. Distance, climate and stormy seas kept Antarctica undiscovered until maybe 1820. Other historians believe that 1899 was when humans first stepped on Antarctica.

John Lennon’s touching  song – “Imagine” might have raised some eyebrows. His idea of a world without countries was probably too idealistic to be true. But, here is Antarctica, which for some reason is that part of the world which is governed by no country. It is a continent where different nations have their bases to conduct scientific observations and experiments only. That’s probably only because of the uncunducive conditions for humans to survive here, nobody dares to claim their rights on this piece of land.

The first such collaborative endeavour was the International Geophysical Year (IGY) which began from July 1st, 1957 to December 31st, 1958. 12 countries set up 35 scientific stations on the Antarctic continent with another 15 on sub-Antarctic islands.

Apart from that, 52 countries have signed the Antarctic Treaty in 1959 – which aims at keeping Antarctica demilitarized, nuclear-free and peaceful; promoting international scientific cooperation and keep disputes over territorial sovereignty at bay.

Antarctica is the coldest and the windiest continent. 89.2° C (-128.6° F) was the lowest temperature that has been recorded here on 21st July 1983 at the Russian Vostok base. This inaccessible area is away from any coast and not affected by the warm oceans.

Calm periods or storm-free weather lasts only for a few hours and the highest wind speed of 320 km/h (200 mph) was recorded at the French Dumont d’Urville base in July 1972. The winds flow from the interior with denser colder air towards the coast. Also known as “katabatic winds”, they produce west-flowing ocean current known as the East Wind Drift due to the rotation of the earth.

Sunlight strikes Antarctica at a very acute angle due to which heat is spread over a greater area. Antarctica is also the highest continent with an average elevation above sea level of 2,300m / 7,546 ft. Unlike the Arctic belt, Antarctica has a huge landmass which is why it is not affected by sea temperatures.

Antarctica is also called as a desert as it receives only 50 mm (about 2 in) rains annually, less than the Sahara.  Cyclonic storms pick up moisture from the seas which results in heavy snowfall. But since there is almost no evaporation, the snow keeps mounting over thousands of years to form thick ice sheets. The thick ice cover makes it the highest of all continents.

Antarctica is the fifth largest continent situated at 66°30′ south (the Antarctic Circle). The roughly circular continent has a long arm stretching towards South America with two large indentations, the Ross and Weddell seas and their ice shelves.

South America is the nearest landmass which is 1000 km away across the Drake passage, which has the roughest waters in the world. The total surface area is about 14.2 million sq km in summer, almost twice the size of Australia.

In the winter, sea water freezes and Antarctica doubles in size. An imaginary boundary Antarctic Convergence is considered and not coastline of the continent or the outlying islands.

The major highlights of wildlife of Antarctica would be the different kinds of Penguins, whales, seals, albatrosses, other seabirds and invertebrates like krill. Most of them are seasonal visitors and they go back in the harsh winters. Almost all of them are dependent on the sea, are warm-blooded and are fairly large. The largest land animal is a tiny wingless midge.

Animals like mites, ticks and nematode worms, mostly found ion Antarctic Peninsula, freeze in ice under rocks and stop all motion along with bodily functions. They become active when the ice warms up and melts.

Whales feed on the rich marine life, especially krill. Six species of seals and 12 species of birds are abundantly found here. Crabeater seals are the second most populated mammal on the planet after humans and krill are far more in numbers than human beings.

Penguins are a flightless bird but are great swimmers and live on pack ice. Adelie and emperor penguins are the most commonly found penguins in Antarctica.

Antarctica has only about 350 species of plants, mostly lichens, mosses, and algae. There are lush beds of such vegetation in some parts of the Antarctic Peninsula. Some algae grow inside the rocks in the dry valleys.

Absolutely nobody lives in Antarctica. Early explorers, then whalers and sealers had occupied different parts of the continent. But from the 20th century onwards only manned scientific bases were built. Scientists sand member of specialist support staff stay here for some years until the next set of scientists arrive. Some bases are open, others are closed and some have even been buried under the snow. On an average about 2000 10 5000 human beings can be found in Antarctica.

Environmental problems and its global impact

Global warming is the biggest threat that Antarctica is facing today which has led to the loss of sea ice. Some ice shelves have collapsed and ice slopes and glaciers have retreated. It not only affects the life of natural fauna and phytoplankton communities in the area but would lead to increase in sea levels in low-lying areas in other parts of the world.

Oceanic acidification has led to the loss of some marine snails which propagates oceanic carbon cycle. There has been a decrease in the number of penguin species. Illegal fishing for krill is another alarming problem.

Pollution has led to the creation of an ozone hole over Antarctica. Discarded hazardous waste that is let into the oceans has affected lives of birds, fish and marine mammals.

Mining in Antarctica has been banned only till 2048 according to the Antarctic Treaty, which means countries could set up their mining bases in the future, threatening the environment further.

Average temperatures of lakes on Signy Island have increased by 0.9°C in 15 years while temperatures in the surrounding seas have stayed constant.

Antarctica has a record of past atmospheres tens or even hundreds of thousands of years ago which contributes immensely to the study of the earth’s natural climate cycles. 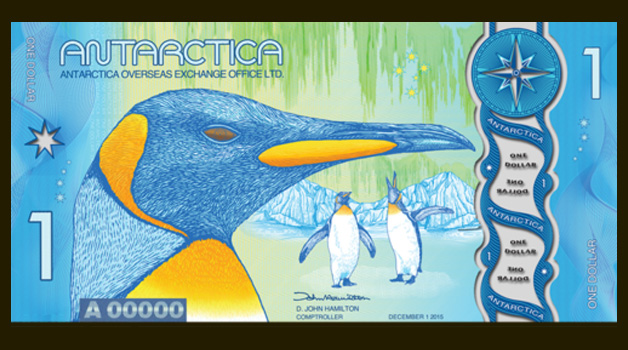 Since Antarctica is not governed by any nation, there are no establishments or companies set up there and people don’t live here, there has been no need for money here.

Antarctican dollars are not legal tender but are collectors’ items produced by the “Antarctica Overseas Exchange Office” which are mostly sold for the equivalent of their face value in United States Dollars.

A portion of all proceeds from the sale of Antarctican dollars would be used to fund science and research organizations. The unofficial currency code AQD comes from the ISO 3166-1 alpha-2 country code for Antarctica – AQ.

The King Penguin along with aurora australis with Compass and Southern Cross constellation used for navigation is featured on the 2016 polymer note with transparent window released on December 1, 2015.

With these lovely notes, you would not just build your collection but also contribute towards the research activities that are being conducted there.

Even though this continent is the coldest place on earth, it needs your warmth to curb  Global warming!

View all posts by Team Mintage World →
One thought on “Antarctica and its Banknotes: Explore the Unexplored”