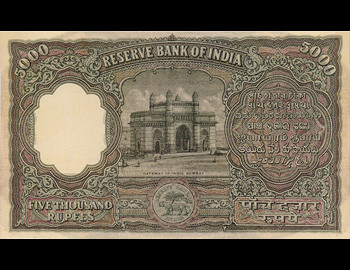 India has a magnificent history. All of it is beautifully reflected on the kind of architecture and monuments that the country is adorned with. Some of it is as old as thousand long years. Monuments on Indian banknotes will give you an overview about the country’s illustrious past. Let’s take a tour then.

The Konark Temple is one of the architectural wonders of India that was built in the 13th century by King Narasimhadeva. The name “Konark” is a combination of two words, ‘Kona’ which means ‘corner’ and ‘Arka’ which means the ‘Sun’.  The temple looks like a humongous chariot from a distance with seven horses and twelve wheels carrying Surya, the sun God. As per mythological stories, Lord Vishnu killed demon Gyasur and placed his important belongings at different places, the lotus being the one that was kept at Konark.

The vignette of 20 rupee note features the chariot wheel from Konark Sun Temple, one elephant on top left and two elephants on top right and one elephant below on either side of chariot wheel. When we are talking about monuments on Indian banknotes, this particular temple has a special significance.

Brihadeeswarar Temple, also popularly known as Tanjore temple turned 1000 years old in 2010. It was built during the Chola period by Raja Raja Chola I and is dedicated to Lord Shiva.  The temple falls under the UNESCO World Heritage Site and is known as the “Great Living Chola Temples”. The foundation of this temple was laid in 1002 C.E. The magnificent architecture portrays wealth, power and artistic expertise of the Chola regime. The temple represents a pure form of Dravidian architecture. It was used for conducting several kinds of royal ceremonies.

The temple was built as per Vaastu Shastras and Agamas. The base is a whopping 16 feet high. The big nandi bull statue is 2 meters in height, 6 meters in length and is made of one single rock. The lingam is 3.7m tall. The outer wall of the upper storey depicts 108 dance postures of Bharathanatyam. The shrine of Goddess was added by Pandyas during the 13th century, Subramanya Shrine by Vijayanagara rulers and the Vinayaka shrine was renovated by Maratha rulers.

The vignette of the 1000 rupee notes released on 1st April 1954 with the signatory of B. Rama Rau depicts the Tanjore temple in the central panel with ‘Tanjore Temple’ written on the bottom right. There are many monuments on Indian banknotes; this particular one is something that every collector would love to possess.

Shalimar Garden was built by the Mughal Emperor Jahangir for his wife Nur Jahan in 1619. It is linked through a channel to the northeast of Dal Lake. It beautifully portrays the richness of Mughal horticulture.

The garden was originally made in 2nd century during the reign of Pravarsena II who founded the city of Srinagar and ruled in Kashmir from 79 AD to 139 AD. The word “Shalimar ” means ‘abode of love’ in Sanskrit.  Slowly though the garden lost its original fame and the village was named as Shalimar.

Maharaja Ranjit Singh turned the marble pavilion into the guest house for European visitors. Electrification of the premises was done during Maharaja Hari Singh’s rule. Over the years, the garden was modified, extended and renovated by different rulers.

The vignette on Indian 10 rupee notes features the Ashoka Pillar on the obverse and Shalimar Gardens on the reverse.  Though Shalimar gardens is an exception while considering monuments on Indian banknotes, we thought of including it since it has a profound historical significance.

Gateway of India on 5000 Rupee Note

In 1911, The gateway of India was actually built to celebrate the visit of George V and Queen Mary to Mumbai. But only a cardboard model was shown to them as the work of constructing it had not commenced since 1915. Only the foundation stone was laid by the governor of Bombay Sir George Sydenham Clarke on 31st March 1911. The gateway was built from yellow basalt and concrete. The foundations were completed in 1920, and construction was finished in 1924. The gateway was opened on December 4, 1924, by the Viceroy, the Earl of Reading.

The end of British Rule was marked with the departure of the First Battalion of the Somerset Light Infantry through the Gateway on 28th February 1948.

A 5000 rupee note was issued with B. Rama Rau as the signatory where the Gateway of India was featured in the central panel with ‘Gateway of India, Bombay’ written below it. This vintage note has a special significance when we mention about monuments on Indian banknotes. 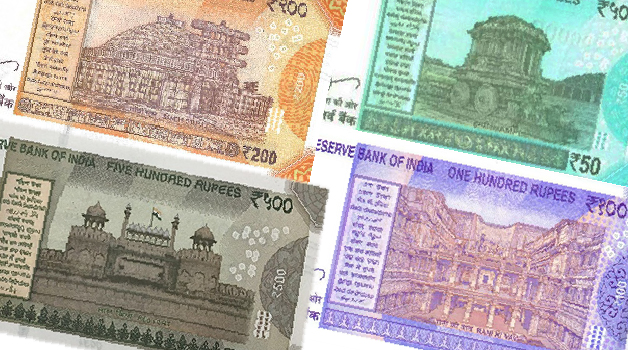 Hampi is a UNESCO World Heritage Site located near present-day Hosapete, Karnataka. It was the capital of Vijayanagara Empire in the 14th century. Spread over 4,100 hectares, the site has several beautiful temples, royal and sacred structures, pillared halls, water structures and more. By 1500 CE, Hampi-Vijayanagara was It the world’s second-largest medieval-era city after Beijing, and the richest in India. Muslim sultanates conquered and looted the city in 1565, after which the city was only left with ruins.

The Vitthala temple is the most beautiful Hindu temple in Hampi, built in early-to-mid-16th century. It has an entrance gopuram and two side gopurams. The main temple stands on a paved courtyard and smaller ones are located to the east. The Garuda shrine is shaped like a stone chariot in the courtyard. It had a tower, which was removed during the late 19th-century restorations. There’s a big, square, open-pillared, axial community hall in front of this shrine. This wonderful symbol of Hampi site is featured on the latest 50 Rs note issued by the Reserve Bank of India. If you are looking for monuments on Indian Banknotes, you should certainly have this note in your collection.

Rani ki Vav is a beautiful stepwell in present-day Patan, Gujarat, on the banks of Saraswati River. Even though stepwells were used as a water resource in India, this astonishing structure is built in the complex Maru-Gurjara architectural style. It also has an inverted temple, seven levels of stairs and 500 main sculptures. Most of these sculptures are dedicated to Vishnu and his Avatars Kalki, Rama, Krishna, Narsinh, Vaman, Varahi. Some sculptures show Nagkanya, Yogini beautiful women and fairies, showcasing 16 different styles of make-up (Solah-shringar). It was named as a World Heritage Site by UNESCO on 22nd June 2014.

The stepwell is constructed by Chaulukya dynasty Queen Udayamati in memory of her late husband, King Bhima I, who reigned from 1022 to 1064. It is 64 m long, 20 m wide & 27 m deep and is known for its stepped corridor and pillared multi-storey pavilions. It has a 30-kilometre tunnel, currently blocked by stones and mud, which is connected to the town of Sidhpur near Patan. An image of Rani ki Vav is featured on the latest 100 Rs note issued by RBI.

Sanchi Stupa is situated in Raisen, Madhya Pradesh and was commissioned by Ashoka the Great in the 2nd Century BCE. It is one of the most ancient stone structures of India. Initially, it was a crown shaped structure or Chhatri made of bricks covering the relics of Gautam Buddha. Ashoka’s wife Devi was born in Sanchi and it was here that the two got married. Four beautiful gateways and a balustrade around the structure were constructed in the 1st century BCE. After the Mauryans, various kings of Shunga period, Satavahana period, Western Shatraps and Guptas continued to build many more structures around the Sanchi stupa until the 11th century.  The Shungas increased the diameter of the original Stupa and covered it with stones.

One of the pillars of Ashoka was erected near the main gateway. The head of this beautiful sandstone pillar shows four lions facing four opposite directions. The pillar also has an Ashokan inscription in Brahmi along with Sankha lipi from Gupta period. It was 42 feet tall when it was intact. Currently, certain remains are found at the site while the Capital structure is preserved at the Sanchi Archaeological museum. Sachi Stupa is depicted on the latest 200 Rs note issued by RBI. By depicting such beautiful monuments on Indian Banknotes, we get an overview of your rich history.

Red Fort is located in Delhi, India and was built under the reign of Mughal Emperor Shah Jahan in 1639. Here is where most of the Mughal Emperors resided till 1856. Several important ceremonies and political gatherings of Mughal State were organised here. The amazing architectural structure was built using red sandstones as a palace of Shah Jahan’s capital Shahjahanabad.

It has two rows of pavilions which are connected by a water channel known as Nahr-i-Bihisht or the Stream of Paradise. It reflects Mughal style of architecture which is a mix of Persian, Timurid and Hindu patterns. It is also known for its innovative garden design.

The Fort was looted when Nadir Shah invaded the Mughal Empire in 1747. After the revolt of 1857, The British destroyed several marble structures inside the fort. The defence walls remained which were later used as a garrison. It was here where the last Mughal Emperor was put on trial by the British after which he was exiled to Yangon in 1858. The Prime Minister of India hoists the National flag every year at the Red Fort on 15th August (Independence Day). You will find an image of Red Fort on the reverse side of the latest 500 Rs Note issued by RBI.

There are many other breathtaking historical wonders and monuments in India. If you were asked to design a banknote for India, which monument would you like to have on it?