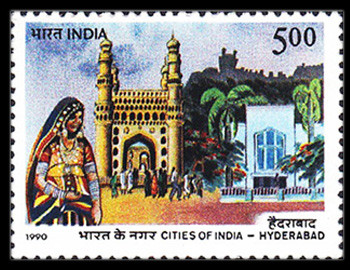 Coming back with a bang is another post from an old series. India is so rich with it comes to its history that a few posts won’t just suffice. Let’s take a look at another set of wonderful Indian stamps with monuments as we share some interesting insights about them. 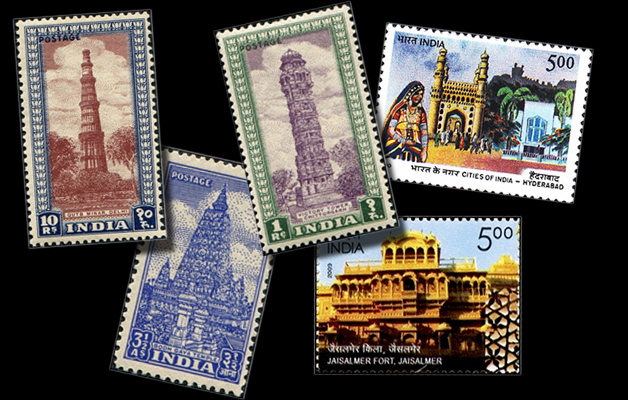 Bodh Gaya is a part of the Mahabodhi Temple Complex in Gaya, Bihar by the bank of river Neranjana. It is believed that Gautama Buddha obtained Enlightenment here under the Bodhi Tree. Mahabodhi Temple, located in Bodh Gaya, became a UNESCO World Heritage Site in 2002.

King Ashoka was the first to build a temple in this location. Buddha gave up self-mortification after pursuing it for six years at Urubela as doing so did not give him Vimukthi. He himself discovered and practised the Noble Eight-fold path to attain Buddhatva or enlightenment which is a state of being completely free from lust (raga), hatred (dosa) and delusion (moha).

His disciples, who first mocked him but later realised the power of this teachings began to visit the place during the full moon in the month of Vaisakh (April–May) as per the Hindu calendar. Over time, the place became known as Bodh Gaya, the day of enlightenment was celebrated as Buddha Purnima, and the tree was called the Bodhi Tree. The main monastery of Bodh Gaya used to be called the Bodhimanda-vihāra (Pali) which is now called the Mahabodhi Temple.

India post issued a lovely 3 and a half anna stamp in 1951 featuring this significant historical monument. If you like collecting Indian stamps with monuments on them, then you must have this one in your collection for sure.

Vijay Stambha is located in Chittorgarh fort in Chittorgarh, Rajasthan dedicated to Lord Vishnu. This tower commemorates the victory of Mewar king Rana Kumbha over the Malwa and Gujarat armies led by Mahmud Khilji in 1448.

The monument has detailed inscriptions of the rulers of Chittaur along with major events as described by Ran Kumbha court scholar, Atri and his son Mahesh. Sutradhar Jaita and his three sons Napa, Puja, and Poma designed this monument and their names are inscribed on it as well.

The topmost storey features an image of the Jain Goddess, Padmavati. Rana Kumbha also had the word Allah carved in Arabic several times. This highlights the welcoming attitude towards all religions by the Rajputs.

An attractive stamp was issued by India post in 1953 featuring this historic tower. There are many Indian Stamps with Monuments on them, but very few might know about this one!

Qutub Minar is 73 metres tall and is the tallest brick minaret in the world located in the Mehrauli area of Delhi, India. The Minaret of Jam in western Afghanistan was probably the inspiration behind Qutb Minar in Delhi built by Ghorid Dynasty. Made of red sandstone and marble, Qutb Minar has a circular staircase with 379 steps leading to the top.

The construction began in 1200 AD by Qutb al-Din Aibak, the founder of the Delhi Sultanate. Three more storeys were added in 1220 by Aibak’s successor and son-in-law Iltutmish. After a lightening destroyed the top storey in 1369, Firoz Shah Tughlaq restored it with two new storeys every year, made of red sandstone and white marble.

Qutb Minar was either named after Qutb al-Din Aibak or Qutbuddin Bakhtiar Kaki , the famous Sufi saint. Numerous Parso-Arabic and Nagari inscriptions reveal the history of its construction.

In 1505, an earthquake damaged Qutb Minar and Sikander Lodi fixed it back. On 1 September 1803, a major earthquake again damaged the Minar and Major Robert Smith of the British Indian Army renovated the tower in 1828.

A lovely stamp was issued on 15th August 1949 featuring this important historical monument. It deserves its place among the many other Indian stamps with monuments.

Situated on the east bank of Musi river, Hyderabad, the Charminar is a majestic mosque that was constructed in 1591 CE. Char Minar literally means ‘four towers’ in Urdu which are attached and supported by four grand arches.

Another popular folklore goes that the Charminar was built in 1589, where Qutb Shah first saw his future queen Bhagmati, and after her conversion to Islam, Qutb Shah renamed the city as “Hyderabad”.

A lovely multicolour 5 Rupees Stamp featuring Char Minar was issued in 1990 by India post. Wouldn’t you love to have this one in your collection of Indian stamps with monuments?

Built in 1156 AD by the Rajput ruler Rawal Jaisal, Jaisalmer Fort is one of the largest fortifications in the world situated in Rajasthan. The area was known for some major historical battles and the huge yellow sandstone walls camouflage in the yellow desert giving it a local name Sonar Quila or Golden Fort.

Jaisal and Sultan of Gaur drew away nephew Bhojdev from his territory. During 1276 King Jetsi strengthened the fort to fight the Sultan of Delhi. The Sultan’s army destroyed the castle after 8 long years and Bhatis took control of the fort. In 1306, Dodoo was elected the Rawal for his bravery for ejecting the Rathors. He subsequently started building the fort. Over the years many rulers from the Mughal regime controlled the fort.

The fort contains 3 layers of walls. The outer or the lower layer is made out of solid stone blocks to strengthen the loose rubble of Trikuta Hill. The second wall is built around the fort. From the third innermost wall, the Rajput warriors once hurled boiling oil and water and massive blocks of rock at their enemies, who would get caught between the second and third walls. The fort also has an effective drainage system called the ghut nail for easy drainage of rainwater away from the fort in all four directions.

As you keep collecting these amazing stamps, do take an effort to visit these destinations sometime soon to lose yourself in the magnificent history of India.

Don’t forget to go through our earlier posts which also spoke about Indian stamps with monuments on them.