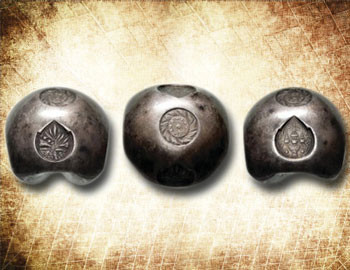 The usual imagery that comes to our mind when we think of coins of the world is the regular circular or square ones, made of some metal with inscriptions of some esteemed personality/ emperor or an emblem that defines a nation’s/empire’s identity. But some creative think-tanks thought otherwise and minted some of the most unusual coins of the world that you might have never imagined. Let’s find out.

Dishkiyaoon! If you thought bullets were made for war, then think again, it was once made for trade. King Ramkhamhaeng (1279-1298) of Sukhothai introduced the world’s first bullet coins which were also known in Thai as phot duang. Some experts think they were issued to resemble cowry shells, which was widely used as currency from ancient times.

These unique coins of the world were made from a short bar of silver which were wider in the middle, with its ends bent around to form a complete circle. To indicate certain reigns or places of manufacture, it was then marked with various circular inscriptions. The coins were made of solid silver and were worth its actual weight.

Many high-quality bullet coins were produced under the regime of Ayudthaya (1569-1767). These coins can be distinguished by their shape and they all bore a hammer mark. Later, King Taksin (1767-1782) took over a transitional kingdom at Thonburi and issued a new set of bullet coins which featured a mark of the chakra. The mold for minting these new coins was made of an elephant bone as wood was too soft and would split, and iron was too hard and would flatten the coin.

Yet another interesting fact about ancient coinage of Thailand! Tiger Tongue and Boat Money were issued in the Lan Chang Kingdom of Southeast Asia which is now a part of Laos and Thailand. Flattened silver ingots were tapered at the ends and used as currency which is known locally as “lat” or “small money. These coins were valued based on their weight.

One variety of the beautiful coins of the world called lat can be distinguished by rows of raised bumps which collectors know popularly as “Tiger Tongue” Money. Another variety is smooth and has a unique dent in the center which is referred to as “Boat Money” or “lad hoi” locally. The first of these kinds of coins were probably minted in the 16th Century.

Arrow coins were found in the central part of China, minted in Han Dynasty, more than 2000 years ago. Arrows were also circulated in the market at that time as currency, hence the name “Arrow Coins”.

If you thought that spades were only used as tools, then here is another exciting fact that will blow your mind. Spade money was an early form of coins used during the Zhou dynasty of China (1045 to 256 BC) and was shaped like a spade or weeding tool.

Considered as the most unique coins of the world, prototype spade money looked like the original agricultural tools. Some are heavy and sturdy enough to have been used in the fields whereas others are much lighter. They featured an inscription of the name of its issuing city. Some of these coins have been unearthed from the Shang and Western Zhou tombs, dating from 1200-800 BC. Inscribed coins dated from c. 700 BC.

You can stab someone or cut vegetables to prepare lunch, but use them as currency too? Yes, approximately 2500 years ago, many kingdoms that existed in China produced large, cast, bronze, knife-shaped commodity money called as Knife money between 600 and200 B.C. during the Zhou dynasty. Some stories reveal that a prince who was bankrupt to pay his troops allowed them to use their knives as a form of currency to barter with villagers.