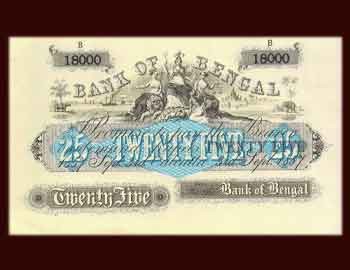 We use paper money or notes on a daily basis and we have an idea of how to identify genuine ones from those that are fake. We may not be adept at it, but we have an inkling, nonetheless. But what do we know of its history? Do we know when, why, and how Indian paper money came into existence? Notes did not start out the way we know it today. It was much, much different. It began as a bank note, a promissory note given by a bank in lieu of precious metal coins which were payable on demand. Bank notes were a great way to carry money without being weighed down by the weight of coins.

What is a Bank Note?

Why were Bank Notes issued?

Bank notes represent a stage in the evolution of Indian paper money where coins of value, whether intrinsic or token, were replaced by promises to pay its physical equivalent or its underlying value. Notes issued from late 18th century onwards were payable to the bearer on demand which meant that the bank note could be encashed by person presenting it for coins of the value stated upon the note.

Banks in India were free to issue promissory notes which were payable to the bearer on demand. These notes could only be converted into the current coins of the region. Since they were issued freely by banks of the country, they came to be known as bank notes. These notes enjoyed free entries and exits from the banks. Few restrictions were placed on the reserve requirements and deployment of funds.

Which Banks of Pre-Independent India have issued Bank Notes?

The following banks have been known to have issued bank notes between the late 18th century and 1861 CE.

There may have been other banks at the time who issued notes, but this cannot be confirmed as there is no surviving evidence.

How many and which denominations were Bank Notes issued in?

Did Bank Notes have security features to counter forgery?

Yes, they did. Security features evolved over time to counter threats of forgery. Security concerns combined with technological developments triggered a change in the bank note’s design. The changes recommended in 1856 CE involved complex and labyrinthine patterns, and multiple colour prints of artistic merit to curb forgeries. The promise clause was abridged and the provision for a name was discontinued. The section was modified to exclude the payee’s name.

A major concern with the banks that issued notes was forgery. Early notes were registered and were circulated amongst a peer group. As the circulation was limited to a group, this method proved to be the most effective tool against forgeries. But as bank note issues, and circulation expanded and became widespread, the threat of forgery grew as well. In 1806 CE, steps were taken to make stealing bank notes a punishable crime. Forgeries of bank notes issued by banks which enjoyed larger circulation occurred frequently. As a precautionary measure, The Bank of Hindostan added security features to its notes.

The Paper Currency Act of 1861 stripped banks of the right to issue Indian paper money, bringing an end to the era of free banking.

Bengal Presidency Bank – Issues of the Bank of Bengal

The Bank of Bengal issued notes in three series – Uniface, Commerce and Britannia. Early notes were of the Uniface series and were issued with the denomination of 1 mohur or 16 sicca rupees in Calcutta. Apart from this, notes were also issued in denominations of Rupees 100, 250, 500, etc. in the early 19th century.

The Bank of Bengal later introduced a vignette which represented an emblematic image of a female figure sitting by the waterfront. This figure was a personification of ‘Commerce’. These notes were printed on both sides. The obverse usually displayed the name of the issuing bank and denomination of the bank note while the reverse displayed a cartouche with ornamentation carrying the name of the bank.

Around mid-19th century, the Commerce motif was replaced the Britannia motif. The notes evolved to include complex and intricate patterns along with multiple colours to prevent forgeries.

Bombay Presidency Bank – Issues of the Bank of Bombay

The Bank of Bombay was established in 1840 CE and was the second Presidency Bank to be opened. It developed as a major commercial centre but has a checkered history. In 1868, the bank was liquidized due to the crisis that arose from the end of a speculative cotton boom but was reconstituted the same year. The notes issued by the Bank of Bombay carried vignettes of the Town Hall and statues of Mountstuart Elphinstone and John Malcolm.

Madras Presidency Bank – Issues of the Bank of Madras

The Bank of Madras, the third Presidency Bank, was established in 1843 CE. It issued the lowest amount of bank notes as compared to the other Presidency Banks. Notes issued by the bank displayed the vignette of Sir Thomas Munroe who served as the Governor of Madras (1817-1827).

Issues of Other Banks

The Oriental Bank Corporation was founded in Bombay as the Bank of Western India in 1842 CE. Notes issued by them featured a vignette of the Town Hall. The Commercial Bank of India was also established in Bombay in the year 1845 CE. It was also an Exchange Bank. The notes issued were printed with a coalescence of Western and Eastern motifs. The bank failed in the crash of 1866 CE.

Presidency Banks were granted free use of government balances and were initially granted the right to manage issuance of Indian paper money for the Government after the Paper Currency Act of 1861 was enacted.