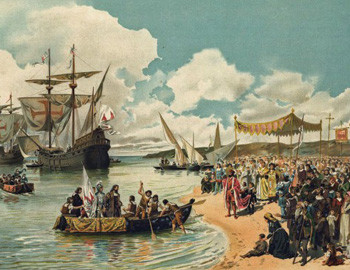 While Christopher Columbus sailed west, looking for the India. Vasco da Gama sailed south and east and found what the others were looking for. It was on 20th May 1498 Portuguese sailor Vasco da Gama set foot on the west coast of India. The arrival of Portuguese in India encouraged many other European countries to sail eastwards. India soon became a market for the western countries.

Known as the Age of Discovery, the period of 15th Century is marked with extensive overseas exploration that emerged as a powerful factor in European culture. Many lands previously unknown to Europeans were discovered during this period. Indian commodities such as spices, cotton, semi–precious stones, and perfumes were popular in European countries. However, the only way to travel from Europe to India was over land which was a long and expensive trip. With the fall of Constantinople in 1453, there was an urgent need to find alternate trade routes.

Global exploration started with the Portuguese discovery of the east. The Portuguese began systematically exploring the Atlantic coast of Africa from 1418, under the sponsorship of Prince Henry.  Expedition after expedition was sent forth throughout the 15th century to explore the coast of Africa. In 1488, Bartolomeu Dias reached the Indian Ocean. With this achievement, a new wave of hope spread among the explorers.

Following the route of Bartolomeu Dias, a Portuguese captain, Vasco da Gama, sailed in. He went further south and saw a piece of land after the voyage of 3 months. Naming it “Cape of Good Hope” Portuguese fleet under the navigation of Vasco da Gama began their journey further. Sticking to the coastal line, they kept going northwards until they reached Malindi. Further, under the guidance of pilot who was aware of the monsoon wind they turned away from the coast and sailed into the vast and unknown sea to explore their dreamland. 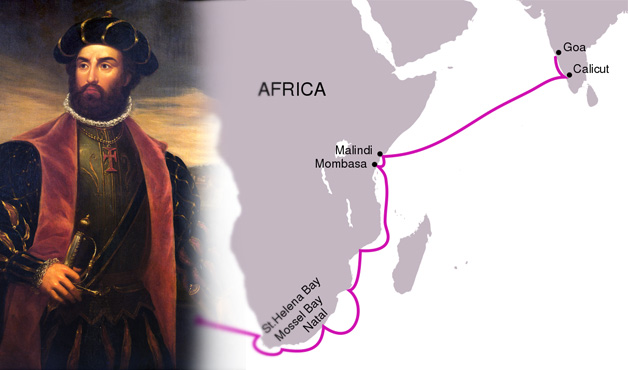 The fleet arrived in Kappadu near Calicut, India, on 20 May 10 Months after they set out for the journey. Hearing the news of the foreign fleet’s arrival, the King of Calicut received them with a great hospitality. However, the interview with the king did not produce a concrete conclusion, as the king did not approve of the gifts brought by the foreigners. The trivial gift of four cloaks of scarlet cloth, six hats, four branches of corals, twelve almasare’s, a box with seven brass vessels, a chest of sugar, two barrels of oil and a cask of honey failed to convince the king that they were royal ambassadors and not a random gang pirates.

Disappointed, the Portuguese fleet left the coast of India. Unaware of the monsoon winds, they faced a terrible journey back to their homeland. Vasco da Gama reached in July 1499 exactly two years after he left his country with a great hope. The Portuguese gave him a hero’s welcome and a reward from the king himself. Though, Vasco da Gama’s expedition was successful beyond all expectation, he failed to come to terms with the king of Calicut.

With a firm determination, Vasco da Gama once again sailed to India to impose Portuguese monopoly over spice trade. With the mission of making a treaty with the king and to set up a factory in India, the Portuguese sailed from Portugal in 1502 with 20 armed ships.

The second voyage was more of a military expedition where he tried to show the might of the Portuguese navy. His arrival in India was followed by a brutal massacre of the locals and bombarded the city. The king submitted to the Portuguese and granted him to set up the factory in India. Vasco da Gama arrived back in Portugal in September 1503, heavily laden with the spices and other loot he acquired on his way back. The violent treatment meted out by da Gama quickly brought trade along the Malabar Coast of India.

Vasco da Gama made his third and last voyage to India in 1524. He reached Goa and made it a base of Portuguese Trade. The king of Portugal John III granted Vasco da Gama the privileged title of “Viceroy. However, he contracted Malaria not long after arriving and died in December 1924.

Vasco da Gama was the first European to reach India by sea, linking Europe and Asia for the first time by an ocean route. He was not only responsible for Portugal’s success as an early colonising power, but also for linking the West and the Orient. The voyages of Vasco da Gama opened up the Indian market to the European Kingdoms which have far reaching impact on India. For next 4 centuries, India witnessed rise and fall of European imperialism/colonialism and acted as an open market for the European imperialist powers. Portuguese set up a colony in India in 1503 which they surrendered in 1961. Hence, Portugal becomes the only European country to set a long lasting colony in India.

The voyages Vasco da Gama are remembered extensively by Portugal who has released many commemorative issues remembering the extraordinary achievements of Vasco da Gama, who appears on stamps, coins as well as banknotes of the country.

Similarly, Vasco da Gama’s India expedition appears on a 200 Escudos coin of Portuguese Republic. The coin depicts Representation of the 3 boats of the first journey of V. da Gama to India and coat of arms of Portugal surrounded by the country name and dates on the obverse. The reverse bears a portrait of Vasco da Gama with his name and dates of his first trip from Lisbon to Calicut. 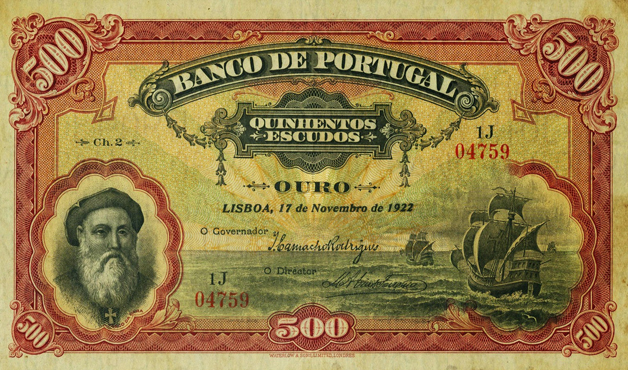 In 2016, The New Zealand Mint released 2oz Silver Coin among the Journeys of Discovery Coin Collection celebrating intrepid travellers and their exploration and discovery of the unknown. The coin captures the exciting moment of Vasco da Gama landing in Calicut, India for the first time on May 20, 1498.

View all posts by Team Mintage World →
6 thoughts on “Vasco Da Gama: The Sailor Who Discovered The Land of Spices”