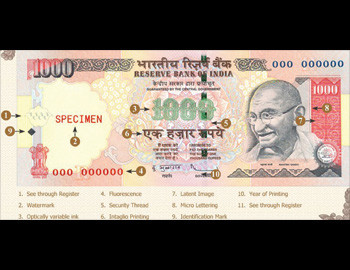 They say technology has its own side-effects. One of them is that it has led to increased counterfeiting activities. The reason behind this is the vast improvement in printing technologies. Making fake notes keeps getting easier than before due to these advancements. Stern measures have to be taken to counter such kind of illegal activities. Central banks all over the world keep upgrading and implementing the latest security features on banknotes to tackle this serious problem. Let’s take a look at the security features on Indian banknotes which will help you identify real and fake notes.

The latent image is a security feature that is concealed within the note. It is visible only when it is held horizontally at eye level. The obverse of Rs.1000, Rs.500, Rs.100, Rs.50 and Rs.20 notes come with a vertical band on the right of the Mahatma Gandhi portrait and contain a latent image featuring the denominational value in numeral.

Micro lettering are minute inscriptions which can be only ready under a microscope. On Indian banknotes of denominations Rs. 5 and Rs. 10, the word RBI is printed using this technique between the vertical band and Mahatma Gandhi portrait. Rs 20 and above denomination notes on the other hand contain the value of the note in microletters. Don’t forget to look for these special security features on Indian banknotes to get a better idea.

Inscriptions or motifs printed using the Intaglio printing or raised printing technique can be felt by touch. On Indian banknotes of denominations Rs.20, Rs.50, Rs.100, Rs.500 and Rs.1000, The portrait of Mahatma Gandhi, the Reserve Bank seal, guarantee and promise clause, Ashoka Pillar Emblem on the left, RBI Governor’s signature are printed in intaglio.

This is a special security feature in which optical fibres and florescent ink is used which glows when exposed to ultraviolet lamp. The number panels on Indian banknotes have this special feature.

This kind of special ink changes its colour when viewed from different angles. This is one of the latest security features on Indian banknotes that was introduced on Rs. 1000 and Rs. 500 notes in 2000.  On these notes the numbers 1000 and 500 are printed on the obverse using optically viable ink.

The see through register is a design that is printed on both sides of the note, on one side, it is hollow and on the other side it is filled up. On Indian banknotes a hollow floral design is printed on the obverse and a filled up one is printed on the reverse. It is placed in the middle of the vertical band next to the watermark and looks like one single design when seen against the light.

RBI has been now circulating Rs. 1000, Rs 500 and Rs. 100 banknotes with numerals in ascending size from left to right in number panels with bleed lines and enlarged identification marks.

Rs 500 denomination bank notes have five angular bleed lines in three sets of 2-1-2 lines on the obverse in both, the upper left and the right hand edge of the notes to aid the visually impaired.

To know more about currency notes of India, visit our online museum now.

Printing and circulating fake notes is a punishable offence in India and you could be fined or imprisoned for indulging in counterfeiting activities. It is important to know everything about security features on Indian banknotes so that you can distinguish between real and fake notes.

Prime Minister of India, Mr. Narendra Modi announced that the Rs 500 and Rs 1000 will not be legal tender anymore after 12 midnight 8th November 2016. This drastic move was taken to crack down black money holders and clean the system completely of corruption.

He also announced that the Reserve Bank of India will soon issue new Rs 500 and Rs 2000 notes with special security features. View these new security feautures.