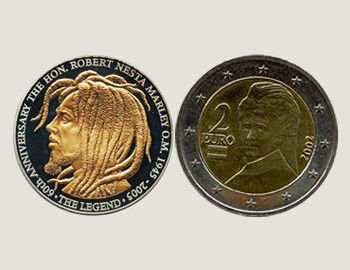 Music has the power to take you a different world, relieve you from all your worries and relax your mind. From a very long time, human beings have indulged themselves in all kinds of music and it has become an important element of cultures from around the world. Several commemorative coins with musicians have been issued to celebrate famous musicians form different countries.

Born in Salzburg, Mozart was brilliant at composing and playing the harpsichord from a very young age. He toured a lot and belonged to the Viennese or classical school. After moving to Vienna he taught music, composed many songs and also served for Emperor Franz Joseph II. Even then, he lived in poverty. He composed 600 works including operas, operettas, cantatas, arias, duets, quartets and more.

The €1 coin featured him on the obverse before it came into circulation in 2002. His 250th birth anniversary was commemorated by Austrain Mint by issuing a Proof gold €50 coin.  If you are looking for coins with musicians, this is something you should have in your collection.

Beethovan was born in Germany but moved to Vienna in 1792 at the age of 22 where he learnt music and composed most of his work. He performed publically as a pianist and composer in Vienna in 1795. 1802 onwards, he suffered from deafness. But nothing could defy his passion for composing music. He kept composing beautiful melodies until he died in Vienna on 26th March, 1827. In 2005, The Austrian Mint issued a Proof gold €50 coin honouring Beethoven.

Reggae is a genre of music which originated in Jamaica. It combines rock and roll and soul music together using moderate tempos with the accent on the offbeat. Bob Marley took reggae beyond Jamaica and introduced it to the world. His music was influenced by Rastafarianism, the unique Jamaican religion.

The King of Reggae Music, Bob Marley has been depicted on Jamaican coins several times. In 1996, a Proof silver $50 coin and gold $100 coin (dated 1995) was issued to celebrate Marley’s 50th birth anniversary. These coins depicted Marley’s famous portrait on the reverse. Similarly in 2006, a 2005-dated coin, highlighted in .958 fine gold plating was issued on the singer’s 60th birth anniversary. A Proof gold $100, 1995 dated coin was issued in 2008, which are similar to the earlier coins.

He teamed up with Bunny Wailer and Peter Tosh to make a vocal group the Wailers and began recording in the early 1960s. His songs became so popular that John Nash recorded Marley’s song “Stir It Up” in 1973 and Eric Clapton recorded “I Shot the Sheriff” in 1974, in their own voices. Queen Elizabeth II of England awarded him the Order of Merit. He died early due to brain and lung cancer on 11th May, 1981.

In 1991, the 10th death anniversary of Bob Marley was observed by organizing a special concert in Jamaica. His name was also included in the Rock and Roll Hall of Fame in Cleveland in the same year.

John Lennon was born in Liverpool on 9th October 1940 and went on to rock the world with one of the most popular bands we know of: The Beatles.

His first band was named the Quarrymen which later evolved into the Beatles in 1960. He went solo in 1970 produced globally acclaimed albums and songs like “Give Peace a Chance”, “Working Class Hero”, and “Imagine”. Lennon was murdered three weeks after the release of his last album – Double Fantasy. Lennon was known for his wit, sarcasm and rebellious nature through his songs, writing or drawings. He was deported because of his criticism of the Vietnam while some of his songs were adopted as anthems by the anti-war movement. If you’ve been thinking of collecting coins with musicians, then you can’t miss this one! He was chosen through a public voting against Britain’s popular personalities to get featured on the country’s silver 5 pound commemorative coin in 2010.

Now that you know some bits about these amazing musicians, put on your headphones and sway to some popular songs composed by them.

Visit Mintage World to know more about coins of India or coins of the world.

View all posts by Team Mintage World →
One thought on “Coins With Musicians: Tinkling Melodies”