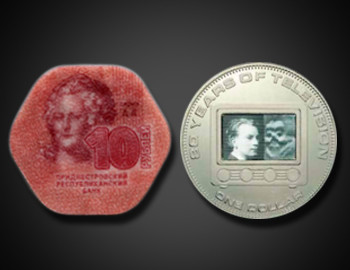 Though usually coins are circular in shape with emblems and depictions of emperors or important personalities, some countries of the world have gone out of their way to issue some really interesting ones. Let’s explore some of the most unusual coins of the world.

Though considered as illegal in many parts of the world, marijuana is featured on official coins minted by the West African nation of Benin! The 2010 issue is a 38.61mm gold plated copper-nickel coin depicting a green marijuana leaf on the reverse and the arms of Benin and the denomination on the obverse. This unusual coin of the world won’t give you a high, but is definitely a collector’s favourite!

Moving Image on Television Featured on Coins from Cook Islands

Considered as one of the most innovative designs that a coin can feature, this particular one issued by Cook Island is a special one indeeed! To commemorate the 80th anniversary of the first television, the Cook Islands issued unique coins in 2006 which featured a moving image inside a television, as the coin is tilted! This 39mm copper-nickel 1 Dollar coin also features a black and white picture of John L. Baird, the inventor of electronic television. This one for sure can be considered as one of the most unusual coins of the world!

The world’s first circulating plastic coins were released in August 2014 by Transnistria. Each of these coins had a different colour, a different shape and featured different personalities. These coins are considered to be highly unusual as it illuminated when exposed to ultraviolet or infrared rays. Now, aren’t they fab?!

Uncle Sam and his famous words “I WANT YOU FOR THE UNITED STATES ARMY” featured on a special set of rectangular shaped poster coins that were issued by Tristan Da Cunha. The set also featude many other such World War I and World War II posters like the ones which read “THE TRUMPET CALLS” which was created by Australian artist Norman Lindsey.

Bermuda has issued commemorative coins many times, most of which are triangular in shape or featured the wild life of the country. Now the mystery behind Bermuda Triangle is now reflected through this one of the most unusual coins of the world.

Somalia known for its notorious activities, has gone rather too creative when it comes to minting coins. They have gone all out and have minted, map shaped, car shaped, animal shaped and guitar shaped coins. Definitely something that coins collectors would love to posses.

Charon’s Obol Coins for the Dead

Finally, here is something that might freak you out. Charon’s obol were coins placed in or on the mouth of a dead person before burial. It was considered as a bribe for Charon, the ferryman who carried souls across the river that divided the world of the living from the world of the dead, according to Greek and Latin literary sources.

So if you had a mint of your own, then how crazy would you go while issuing your new coin?