The universe is made of unimaginable elements, all of which probably were made or came into existence at a particular time, on a particular day.  In the modern world, archaeologists try to find the ‘time’ entrapped in such elements which is a cumbersome process.  How easy it would be if you find an archaeological object accompanied with an object which is dated?  Numismatics has been a vital tool to date such objects with sound evidence and coins with dates fulfil their requirement with undeniable proof of time.

The importance of archaeological dating

Archaeologists from around the world try their best to accurately calculate the date of all excavated findings or artefacts. This process of estimating the age of ancient materials or determining a chronology of events in the history of earth is called as dating. Dating is crucial for constructing models of the past and is more accurate as it relies on the integrity of datable objects and samples. In a way this helps in creating evidence for certain historical events.  Archaeologist use various methods of dating objects, they may be C14, TL (Thermo-luminescence) dating, K-Ar (Potassium-Argon) dating or other relative dating methods.  Any archaeological find with a coin provides earliest potential date.

There is nothing more precise than marking events in history by studying coins that were issued in that era. Especially when they have dates on them, the evidence becomes much more solid in nature. Dates and mintmarks are put on coins for quality control purpose or it could be for political reasons. These inscriptions help governing authorities to monitor if quality coins are minted with the correct amount of precious metal in them. Dates are inscribed according to the year of a ruler’s term in the lineage. Different emperors have issued coins with dates that follow varying calendar systems, like the Saka calendar, Seleucid Era calendar, Parthian Era calendar etc. Let’s look at some of the earliest coins that were minted with dates on them.

Before Iranians, Lydians were the first tribe who invented the coin named Stater. Post that, in the 6th Century BC, the Iranian Darik was minted and used as the official currency of the Persian Empire at the regime of Archaemedians for over 200 years. The history of Iran from the mid-4th to mid-3rd century BC not recorded clearly and nothing is known about what happened after the fall of the Achaemenid Empire. 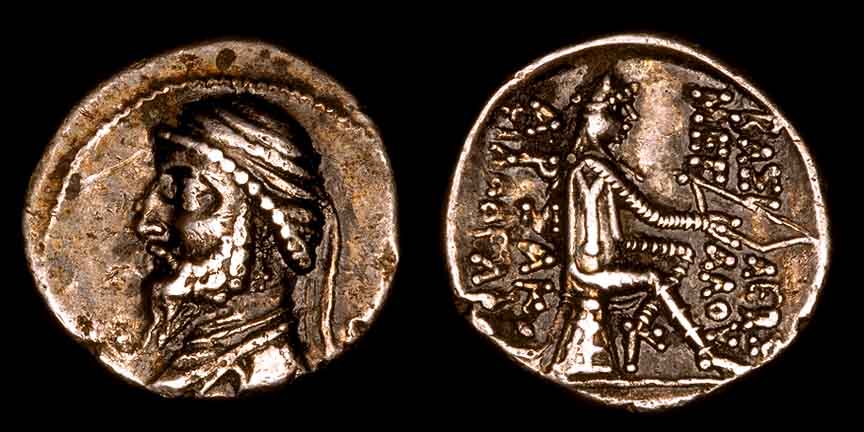 Image of an Ancient Parthian Coin

Research has proved that Parthian coins were one of the earliest coins with dates on them. Dates on Parthian coins are mostly found on tetradrachms that were issued by Seleucia mint. The Parthian Era began in 247 B.C. Between 250-247 BC a man of unknown antecedence called Arsakes (Arshak) and his troops invaded the Seleukid satrapy of Parthia. Later he extended his power to Hyrcania and then in about 228 BC defeated the Seleukid king. According to Justin (41.4.10), the Parthians observed that date as the beginning of their independence. Coins with dates were widely used during the reign of Phraates IV (c. 38 – 2 B.C.) onwards. Dated coins are rare, before this time. The year and month on the coins are based on the Seleucid Era calendar, which is generally believed to have used the Macedonian system starting October.

Wroth reports that Parthian drachms never featured dates, with the possible exception of several Artabanus I drachms. Sellwood on the other hand accepts these drachms as bearing dates in the Parthian Era.

However, Sellwood states that there are some bronze coins from Seleucia that would support a New Year beginning in April — which is the start of the Babylonian New Year.  But an April date also marks traditional Iranian celebration of the Novroz (New Year’s) festival in Spring.

Below are tables to identify dates and months written in Greek on Parthian coins.

The Coinage of Western Khsatrapas

From the 1st to the early 5th century BC, the Western Kshatrapas ruled a large area of western India. Their dynasties were knowns as Kshaharata and Kardamaka.  The coins of Kardamaka ruler Rudrasimha are considered to be the first dated coins of India and this practice of dating coins behind the bust of ruler on obverse was followed till Gupta emperor Chandragupta Vikramadity took over the reign from them.  These coins with the names and title of ruler and date gave historians a vivid idea about the chronology of whole dynasty and could build a history only because of their coins as there are very few other evidence available to know their history.

The Saka era began with the ascension of the Saka Western Satrap ruler Chashtana in 78 CE. Inscriptions of Chastana dated as early as years 6 and 11 and as late as year 52 exist. Thus he must have ruled upto at least the year 130 AD. Some experts believe that Kshatrapas might have been governors of the Kushan Kings like Kanishka, others state that they could have been governors of the Scythian king such as Azes II. Kshatrapas asserted their independence and struck coins after the main Scythian power declined.   These remains subject of debate.

The year in which the coin is made is represented on the coin using the Saka calendar. The dates on western Kshatrapa coins are found from Saka 100 to Saka 337 (i.e. 178AD to 415AD) in Brahmi Numerals

Below is the table to understand Brahmi numerals:

Rudrasimha I introduced the method of inscribing dates on coins in 178 and it ended with the last ruler of Kshatrapas Rudrasimha III around 415. The coins have the name of ruler, his title as well as the ruler’s father’s name and his title also. Study of coinage has helped historians accurately identify the chronology of events and Khsatrapas rulers.  However, an exception was made by one ruler known as Ishwardutta, regarded as usurper, who introduced writing a regnal year on the reverse of the coin.  His coins with Varshe Prathame (the first year of rule) and Varshe Dwitiye (second year of rule) are found.  There are unconfirmed reports of other year too but is debatable.  Gupta rulers minted some silver and base metal coins with dates but of their own calendar Gupta Era.

The first month of Saka calendar is Caitra with 30 days in normal and 31 days in leap years. Caitra is followed by five consecutive 31 day months, then six 30 day months. Years in the Indian calendar are counted from the start of the Saka Era, the equinox of March 22nd of year 79 in the Gregorian calendar, designated day 1 of month Caitra of year 1 in the Saka Era.

And the tradition followed

There was a period of almost 700- 800 years before the dates were reintroduced again on Indian coins, this time by Islamic invaders. The coins of Muslim rulers had dates either written out or in numerals.  Inscribing coins with regnal year in addition to Hijri calendar date and mint name was in practice during Mughal rule and we profusely find these coins.  Vikram Samvat dates were used in some Islamic coins too vis-a-vis Hijri dates. Many princely states like the Sikhs used Vikram Samvat dates regularly on their coins, sometime with Hijri date on the other side of coin.

The ancient tradition of minting dates on coins has been followed and has been a distinct protocol through the medieval era to the modern day coinage.