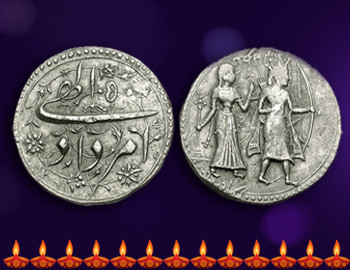 It is that time of the year that every Indian has anticipated from a very long time! Celebrations are on, as Diwali is almost here and we present coins of India and stamps that are in some way related to his joyous occasion!

From indulging in tempting and mouth-watering delicacies to meeting up long lost friends and relatives, this festival brings a smile on each one’s face. Diwali is the short version of the Sanskrit word “Deepawali” which means a “necklace of lamps”. Popularly known as the festival of lights, Deepawali, which starts in the last days of Ashwin month of the Hindu calendar and extends into Kartik month, is considered to be one the most important auspicious occasion when lamps of happiness spread the real spirit of the season. People of all age groups spend their evenings bursting fireworks that light up the skies and fill the air with excitement. The New Year gives you another reason to go shopping and dress up in your best attire. Mintage World wants to be a part of these celebrations and takes the opportunity to add a Mintage twist to the festivities.

The Significance of Diwali For Different Religions

As per Hindu Mythology, Lord Rama came back to his kingdom Ayodhya after a 14-year long exile from the forests defeating Ravana. This festival was celebrated to welcome the Lord back in his own land. According to the Hindu calendar, Diwali is observed on the new moon that occurs between mid-October and mid-November. The occasion in a way celebrates the victory of good over the evil. The five-day festival starts with Dhanteras and ends with Bhaubeej.

Diwali is not just observed by Hindus, it is a significant occasion for many other religions and sects like Jainism, Sikhism, Buddhism and Sindhis.

It is believed that Lord Mahavira, the 24th Thirthankara achieved Nirvana on Amavasya of Ashwina Masa in 527 BC at Pavapuri Bihar. Lamps are lit by the Jain community to honour his contributions. They also recite auspicious hymns, meditate and fast on these days.

The third Sikh Guru Amar Das asked the Sikh Community to come together on Diwali to seek blessings of the Guru at Goindwal. The founding stones of the Golden Temple were also laid on this day. Guru Hargobind Sahib was imprisoned by Emperor Jahangir along with other Hindu Kings as political prisoners at Gwalior fort. He was released in October 1619 after the people fought for their Guru. The Guru asked the emperor to release all the other kings as well, which was agreed upon. After the release, he went to the Golden Temple where he was greeted by his flowers by lighting lamps. The day is hence observed as the “Bandi Chhor Diwas” or the day of freedom by the Sikhs. On this day, Nagar Keethan or street processions are organised along with Akahnd Paath when the Guru Granth Sahib is recited non-stop.

Buddhists, particularly Newar Buddhists celebrate Diwali by chanting Mantras remembering King Ashoka who converted to Buddhism on this day. They observe this day as Ashok Vijayadashami.

Many coins of India and stamps highlight various aspects of this beautiful festival.

So we begin with one of the most sought after coins of India, Ram Siya Silver Rupee issued by the Mughal Emperor Akbar (1556-1605). This coin was struck at the Agra mint in the year AH 1013/4 / AD 1604/5. The coin was sold at the Triton XIII sale in January 2010 for $1,40,000!  The text “Ilahi 50 Amardad” appears in Persian in two lines with a floral vine around it. A crowned Lord Rama is depicted wearing his royal dress, holding an arrow in the right hand and a bow in the left. A standing Siya or Sita holds a lotus in each hand. The text “Rama Siya” in Devanagari also appears on the coin. The coin is the only one issued by Akbar which features human figures. Three known examples exist, one in gold and the other two in silver and all three of them do not have a mint name. Diwali is a very important event that’s mentioned in Ramayana, one of the most prominent Hindu epics. Ram tanka or Hindu temple tokens also feature this couple. Akbar had translated Ramayana and Mahabharata into Persian and distributed the same to his nobles. He accepted all religions to maintain harmony. He opposed jizya, the tax exclusive for all non-Muslims. He also married a Hindu Rajput Princess. He introduced Din-i-ilahi by combining Sufism and Hinduism. From 1584 onwards, the Ilahi dating system was introduced to commemorate this movement.

The swastika is an 11,000-year old ancient religious Indian symbol of peace and prosperity made of an equilateral cross, with four legs that twist at 90 degrees. It is also a sacred and auspicious symbol in Hinduism, Buddhism, and Jainism. Swastika is a Sanskrit word which means “lucky or auspicious object”.

Also known as the gammadion cross in Greek history, as it looks like four Greek gamma letters joined together. Various cultures right from the Neolithic Age have been using it as a decorative element.

During Diwali, people prepare these designs using natural powdered colours just outside the entrances of their homes on the floor.

A Circa 625-600 BC. Twenty-Fourth Stater belonging to the EL Myshemihekte Phokaic standard Geometric type measuring 7mm, in diameter and 0.64 g in weight features a Raised clockwise swastika pattern. (bottom image)

A Circa 386-338 BC AR Hemidrachm from the Thrace, Chersonesos measuring 15mm in diameter and 2.22 g in weight features a lion head on one side and the swastika on the other side. The test cuts were made by merchants to ensure that the coin was not plated. (top right image)

A Circa 555-515 BC AR Archaic Stater from Corinthia, Corinth measures 23mm in diameter and 8.35 g in weight and features the Pegasos flying on one side and the swastika pattern on the other side. (top left image)

Goddess Lakshmi, or the Goddess of Money is also worshipped across the country during Diwali. A special pooja is held during Dhanteras to please this Goddess. Listed below are some coins of India that feature Sree Lakshmi.

Chandellas of Jejakabhukti issued a Gold Masha under Kirttivarmadeva (1098 AD) featuring seated Lakshmi on the obverse and the Nagari legend Srimat Kirtti Varmadeva on the reverse. (top left image)

Apart from coins of India, Canada issued a special 99.99% pure gold Diwali special coin this year. The outermost ring is inspired by a design pattern that’s seen on the Taj Mahal, along with trilliums and Pacific dogwood flowers in between to portray Toronto and Vancouver where the most number of Indo-Canadians live. The Coin’s centre is a lit Diya. The Om symbol and the Khanda or the military emblem of the Sikh is depicted in the outer rings. Khanda is made of two kirpans and the chakkar. Mintage World has an elaborate listing of Sikh coins of India, where you can learn more about Sikh coinage. Om is a sacred mantra in Hinduism and Tibetan Buddhism. The maple leaf or Canada’s national symbol is also present. The coins are intricately designed with minute detailing.

Not just coins of India, Joint issue stamps were released on 5th November 2012 between India and Israel. The stamp features a row of traditional lamps. The 5 rupee stamp was released to commemorate 20 years of diplomatic relations between India and Israel. A sheetlet has 20 stamps. In Israel, Hanukkah is another occasion which is also known as Festival of Lights. It is an eight-day Jewish festival commemorating the rededication of the Holy Temple (the Second Temple) in Jerusalem at the time of the Maccabean Revolt against the Greeks of the 2nd century BCE. It is celebrated from late November to late December in the Gregorian calendar. The Israeli stamp features a menorah with the word “Zion” inside a Magen David star.

Not just in India, Diwali has been given its due importance in the U.S as well this year with the release of a Forever Diwali Stamp. On 4th October 2016, a special ceremony was conducted to unveil the first-day-issue at the Consulate General of India, New York. The stamp features a Diya oil lamp on a gold background. During Diwali households across India start shimmering with these beautifully lit lamps made of clay.

Start collecting Diwali Special coins of India and stamps right away, so that you have something to boast about next Diwali!

Also if you know of any other stamps or coins that can be included in this list, we would be more than happy to know!

May this auspicious time bring in bounds of happiness in your life.