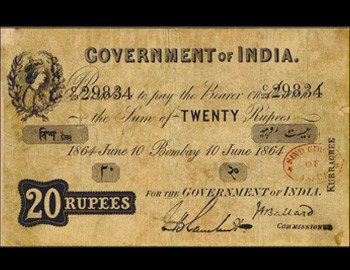 The original proposal anticipated paper currency which was supported by reserves of coins valuing at least one-third of the outstanding notes. This reserve would have been managed by an independent commission. The members of this commission could only be removed by the Secretary of State for India. Wilson’s untimely death left the responsibility of the bill over his successor, Samuel Liang, who modified the Bill substantially before implementing it.

Wilson’s proposal was designed to permit temporary expansion or contraction of currency in order to accommodate variations without change in coin reserves. The system that was put in place was rigid. Issued paper currency was backed entirely by coin reserves with restricted fiduciary issues of Rupees Four Crores against government securities.

The Paper Currency Bill was passed in 1861 CE as Act XIX which came into effect in July 1861. Under the act, authorised Presidency Banks were permitted to enter into agreements with the Secretary of State to become agents to issue, pay, and exchange promissory notes of the Government of India.

The first set of Indian banknotes to be issued by the British Government of India featured Queen Victoria’s portrait. These notes were issued in denominations of Rupees 10, 20, 50, 100 and 1000. The Currency Act of 1861 stated that the minimum denomination of bank notes to be issued were Rupees 10. Bearing in mind the value and purchasing power of Indian currency in the 19th Century, these notes were fairly high denominations.

These British Indian banknotes were unifaced, bore dual language panels, and were printed on hand-moulded paper manufactured by Laverstock Paper Mills (Portals). Their security features included a watermark and a printed signature. To secure these notes further, there registered at the time of being issued. Paper currency in the 19th Century was rarely used by the general public. They were mostly used for collecting revenue, and remitting funds for commercial and official purposes.

The Victoria Portrait series notes were withdrawn due to a flurry of forgeries.

The Uniface Underprint series of British Indian banknotes were first issued in 1867 CE. The first notes belonging to this series were printed in green. The ink was later changed to red. Just like its predecessor, the Underprint series notes were printed on moulded paper. The green series carried four language panels while the red carried eight. Languages varied depending on the Circle of Issue.

Security features added to these notes included a wavy watermark, guilloche patterns, and a coloured Underprint. The watermark was a source of confusion while dating the notes.

Public demand led to the introduction of five rupee notes under Act III of 1871. Notes could technically be encashed only in the currency circle of their issue.  These notes were not legal tender outside the circle. However, in practice, these notes were freely encashed within reasonable limits.

Popular demand for bank notes, which were restrictive in nature, led to its ‘universalisation’. Between 1903 and 1911 CE, 5, 10, 50 and 100 rupee notes were ‘universalised’. This meant that currency of these denominations were legally encashable outside the currency circle in which it was issued. The process was slow because the government was reluctant. This reluctance rose from the perceptive notion that the notes were extensively used for remittance purposes within the country. The government was also apprehensive that they would lose commission and exchange on remittances that went through government channels.

Remittances were often executed through postal services. As a precautionary measure, the bank note would be split in two and one half would be dispatched to the recipient through post. The second piece was mailed only upon confirmation of receipt of the first piece by the recipient. The bank note was pasted together before being presented for payment.

The Underprint series remained in circulation until notes bearing the King’s portrait were issued in the 1920’s.

Small denomination notes were introduced due to public demand. Re. 1 notes were introduced on November 30, 1917 followed by Rs. 2 Annas 8 notes in January 1918. The reverse of the one rupee note bore the image of a one rupee coin that was promised to be paid to the bearer on demand. The notes carried the portrait of George V and were a precursor to the King’s Portrait Series that followed.

Regular issues of the King’s Portrait Series were introduced in May 1923 with the issue of ten rupee notes. The note carried a motif bearing the King’s portrait – George V and George VI which proved to be an integral feature of all subsequent issues of the British Indian government.

These notes were issued in denominations of Rs. 5, 10, 50, 100, 500, 1000, and 10000 were issued. These notes were printed in England and shipped to India for circulation. Due to a sharp rise in demand for bank notes, a security press and a current press were set up in 1925 CE and 1928 CE respectively at Nashik. By 1932 CE, the Nashik press was printing all currency notes for circulation in India.

Security features for these notes included a clear watermark window, intricate portraits of the king, and multi-coloured printing. Till 1935, when the Reserve Bank of India was setup, the British Government of India issued all currency for the country.

The British Government of India managed paper currency issues between 1861 CE and 1935 CE. The system was based on two important principles –

With the intellectual turbulence that led to change in the world in terms of money, these principles changed over this period. The country saw the need for a central bank which led to the establishment of the Reserve Bank of India in 1935 CE ushering in a new era for paper money.