Liberia or the Republic of Liberia is a tiny country located at the tip of the western coast of the continent of Africa. Bordered by three countries on the north, east and northwest, Liberia enjoys a generous amount of coastal line on the south and southwest. Began as a settlement of the American Colonization Society (ACS), Liberia declared its independence on 26th July 1847. The first stamps of Liberia were issued in 1860. Before going further on our today’s topic – First Liberia Philatelic Stamps, let’s get to know about the country of Liberia and its history.

Liberia was the first African republic to proclaim its independence and is Africa’s first and oldest modern republic. But before that, Liberia was one of the earliest settlements of prehistoric men. Right from the Stone Age, Liberia gradually went through step by step settlement of human civilization. Liberia has been inhabited by indigenous peoples of Africa at least as far back as the 12th century till Mande-speaking people expanded westward from Sudan, forcing many smaller ethnic groups southward toward the Atlantic Ocean. Arab traders entered the region from the north, and a long-established slave trade took captives to north and east Africa. Between 1461 and the late 17th century, Portuguese, Dutch, and British traders had contacts and trading posts in the region.

In the early 19th century, Liberia became a settlement of the American Colonization Society. Hence, between 1822 and the outbreak of the American Civil War in 1861, more than 15,000 freed and free-born people of colour who faced social and legal oppression in the U.S relocated to Liberia. This was the beginning of the formation of modern Africa. These settlers developed the “Americo-Liberian” identity. Liberia declared independence on 26th July 1847 which was finally recognized by the world, not till February 1862.

Among all the world postage stamps, issued in 1860, the First Liberia Philatelic Stamps are one of the most valuable stamps. Up to this time, the transmission of letters had solely been carried out by private couriers. In fact, a syllable-based system for writing down messages and sending them between villages had been in use by the native population since the second half of the 18th century.

After the declaration of independence, and due to the many changes in the political, social and economical life that came along with it, the young government soon felt the need to assume control over the mail service, banning any kind of private transport of inland mail. On January 20, 1850, Liberia signed a postal convention with Great Britain, and the first commercial mail contract for carriage via UK package and Liverpool was signed in 1852. Two years later, the first post offices were opened at many places including the capital of Liberia – Monrovia. Mintage world – the online museum for stamps – brings you the information about First Liberia Philatelic Stamps include the first definitive stamps, first commemorative stamps and first airmail stamps which mark the historic achievements of the country.

Lithographed by Dando, Todhunter and Smith, London, Liberian First Postage Stamps consisted of three stamps, one each of 6c, 12c and 24c in red, blue and green colour, respectively. The stamp depicts an allegorical design of Liberty: a white woman with a shield and lance sitting on a rock, safeguarding a ship with freed slaves approaching the coast. The Liberty is shown sitting in an oval vignette in the centre with the name of the country inscribed below. The vignette is inscribed with the denomination value at the top and the bottom.

This issue was reprinted several times which remained unchanged until 1880 when new colours were introduced. With the new colours, two more values were added. Liberian First Postage Stamps were the only available for two decades. They are remarkably scarce and even rarer on the cover. Less than fifteen recorded covers are making them one of the rare postage stamps of the world. 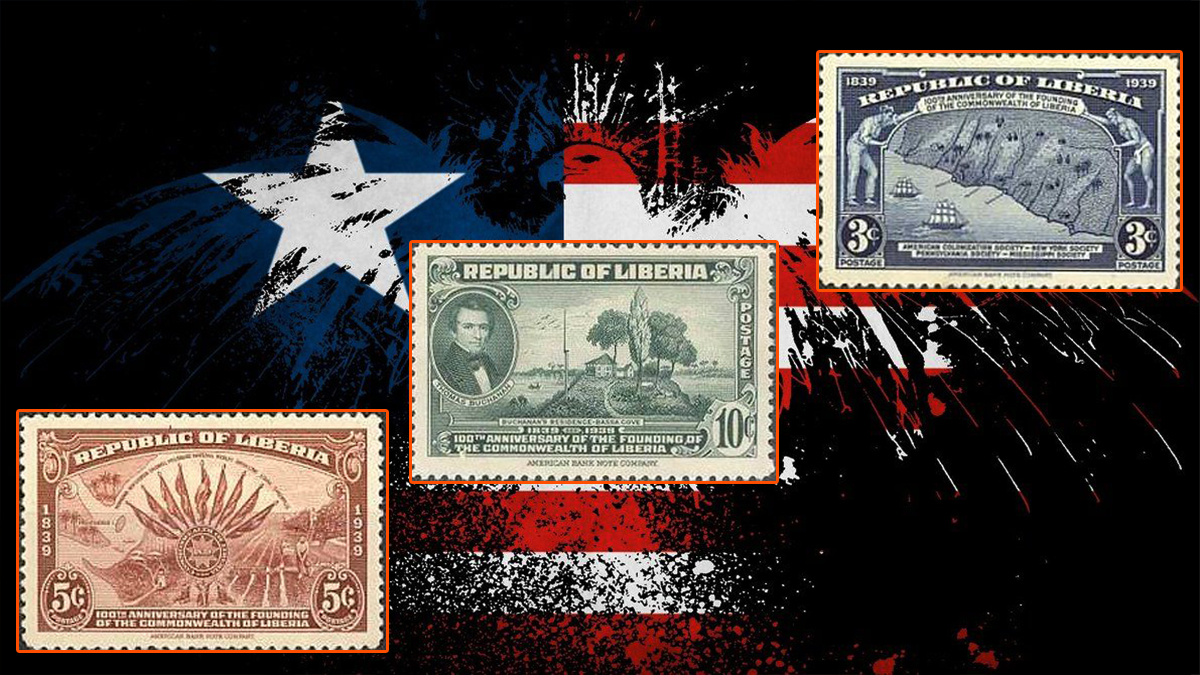 The stamps were issued in a set that included three stamps. They were issued with the denominations of 3 cents, 5 cents and 10 cents. The 3 cents stamp shows the Coast Line of Liberia in 1839. The 5 cents stamp features the Seal of Liberia along with the farming and other agricultural business. The 10 cents stamp depicts Thomas Buchanan & his residency in Bassa bay. Thomas was the first governor of Liberia. The stamps are inscribed with “Republic of Liberia” on the top and “celebrate the 100th Anniversary of the foundation of the Commonwealth of Liberia” at the bottom flanked by denomination value. The years 1839 and 1939 are seen at left and right respectively.

Airmail is one of the monumental achievements of humankind. The first official internal airmail flight in Liberia took place on 28 February 1936, between Monrovia and Cape Palmas. For that occasion, the first three values of the 1928 definitive set had been locally surcharged “Airmail / Six Cents”.  The actual overprints were extremely poorly executed.

Hence, the event was celebrated more appropriately with a new commemorative stamp set. This is how, on 30th September 1936, Liberia issued her first airmail stamp set which constitutes an integral part of Liberia Philatelic Stamps. These airmail stamps were triangular and were issued with six denominations ranging from 1 cent to 6 cents. The stamps are inscribed with Liberia Airmail on two sides and denomination at the bottom and depict Ford Trimotor flight.

First Liberia Philatelic Stamps is just a drop in the vast ocean of philately and stamp world. Information along with interesting facts about such fascinating stamps can be found on Mintage World which is an online museum for stamps, coins and banknotes. Mintage World is a platform where one will get to know not just about the newest and oldest world postage stamp but also about different ways of printing postage stamps. Moreover, you can also buy world stamps if you are someone who likes collecting stamps based on certain themes. Here, you can browse through our website and purchase postage stamps of your choice.