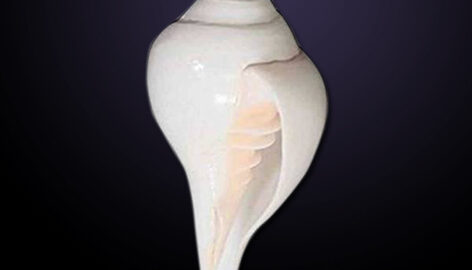 What is Conch or Shanka?

Conch or Shanka is a wonderful gift given by nature to mankind when blown produces a distinct sound that is considered to be auspicious and soul awakening. The blowing of Conch is the one religious practice followed from the ancient period. The magnificent snow-white gastropod shell is popularly known as the shank, in Sanskrit, it is popularly known as ‘Sankha’. It is considered as the symbol of purity, brilliance and auspiciousness.  It is also well known by the name of the Conch. When the apex of the Shank is blown to form a whole, it produces a magnificent sound. Once Conch was also used as a medium of exchange and it was equivalent to coins in India. Conch Shell Vintage coins have great value in the Indian market.

Conch is also known as Shankh, Shankha or Shankham, the word Shankham is derived from the Sanskrit word ‘Shum’ and ‘Kham’. The meaning of the word ‘Shum’ is good and ‘Kham’ means water; hence the word ‘Shankam’ means conch that holds scared water.

The Shanka is adopted as one of the divine symbols with religious significance. The health benefit of blowing a Shankh or Conch Shell destroys the disease-causing germs in the atmosphere. The Shank (Conch Shells) has a very important place in Ayurveda, and even the Conch Shells have had religious and cultural importance since the ancient age. During the ancient period, the Conch Shells or Shank was not only used as a raw material for the manufacture of bangles, rings, and ornaments but was also used as a medium of exchange.

The blowing of Shank provides a great exercise for the urinary tract, bladder, lower abdomen, diaphragm, and chest and neck muscles. It is also considered a good exercise for thyroid glands and vocal cords that helps us in correcting speech problems.

The religious belief of Conch

Conch has ritual as well as religious importance in Hinduism. The Conch shell is a large predatory sea snail. The significance of the Conch Shell in Hinduism is that it is associated with Lord Vishnu, one of the most important Gods in Hinduism. According to the Hindu ideology, the shank is coveted and revered as fame, longevity, and prosperity, and is also the cleanser of sin.

The sound of the conch is thought to ward off evil spirits and blowing it daily was considered healthy for the respiratory system. Conch is also considered, as the symbol of the god Vishnu, and symbol of wealth, success, and good fortune. The sound of the Shankh produces the sacred ‘Om’ sound. In Hinduism Vishnu holding the conch represents him as the god of sound.

Brahma Vaivarta Purana declares that Shankh is the residence of both Lakshmi and Vishnu, bathing by the waters led through a Shankh is considered like bathing with all holy waters.

Arthasastra had mentioned Conch as one of the ones among the variety of treasures entered into the treasury of the government. Conch in terms of coins

We can buy and find references of Conch on Indian ancient coins in Punch marked coins through different sources.

During the ancient period in many parts of the world once conch shell money was used as a medium of exchange that was similar to the other form of commodity money. Before thousands of years in China, the cowrie’s shells were used as Chinese Currencies. In India, Conch Shells have been used means of exchange. In the Indian State of Orissa, Conch Shells Vintage coins were used as a currency until 1805 CE, later it was abolished by the British India Company and the rupee was enforced. This was one of the causes of the Paik Rebellion in 1817.

Today, Conch Shells Vintage coins are considered as rare old antique coins. Conch Shells Vintage coins are counted amongst the old Indian Coins that were in use before the Punched Marked Coins in India. These old Indian coins are like a National treasure or a National Heritage and one should always collect coins to keep this safe and to save our national heritage. One should always buy ancient coins to save both cultural and economical history.

We can also see the Conch or Shank in some of the Indian Coins. Indian kings have used the conch as a symbol in the coins they issued. Below is some of the example. 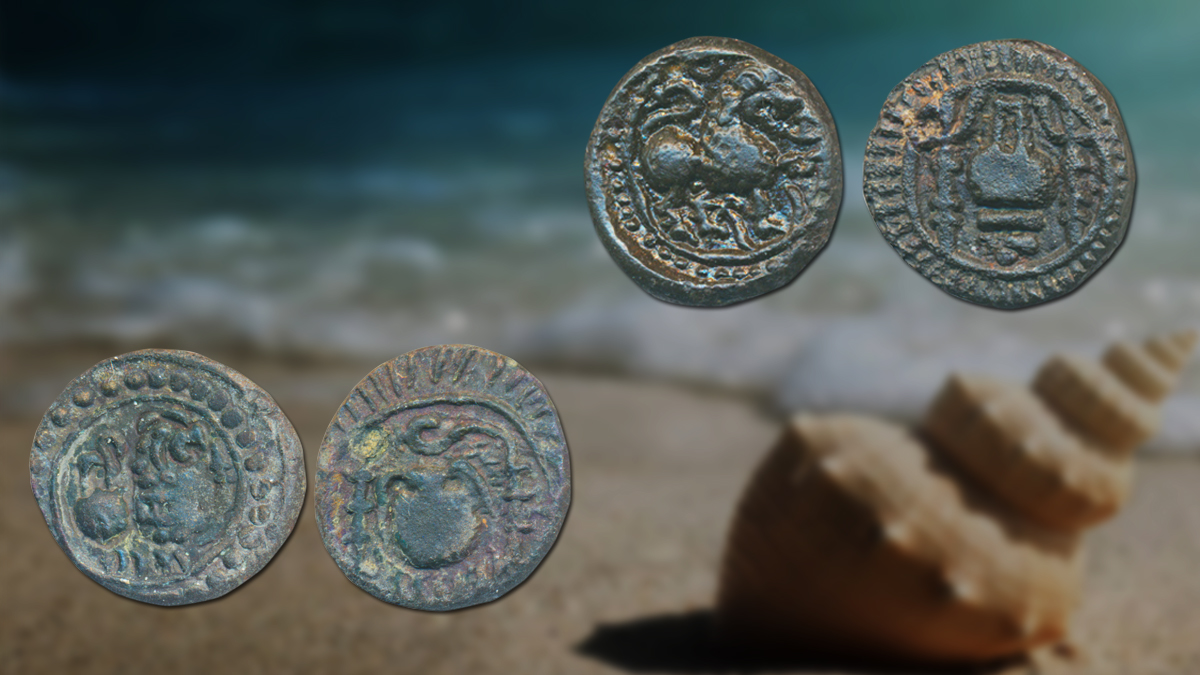 We can see the symbol of the Conch coin along with the other coins. Although this coin was issued; from (name of the dynasty coin belongs to) king who issued this coin is unknown.

In one of the coins issued by the ‘VishnuKundin’ dynasty, we can find ‘Kalash (Kumbh) between two tridents, srivatsa placed over conch’. 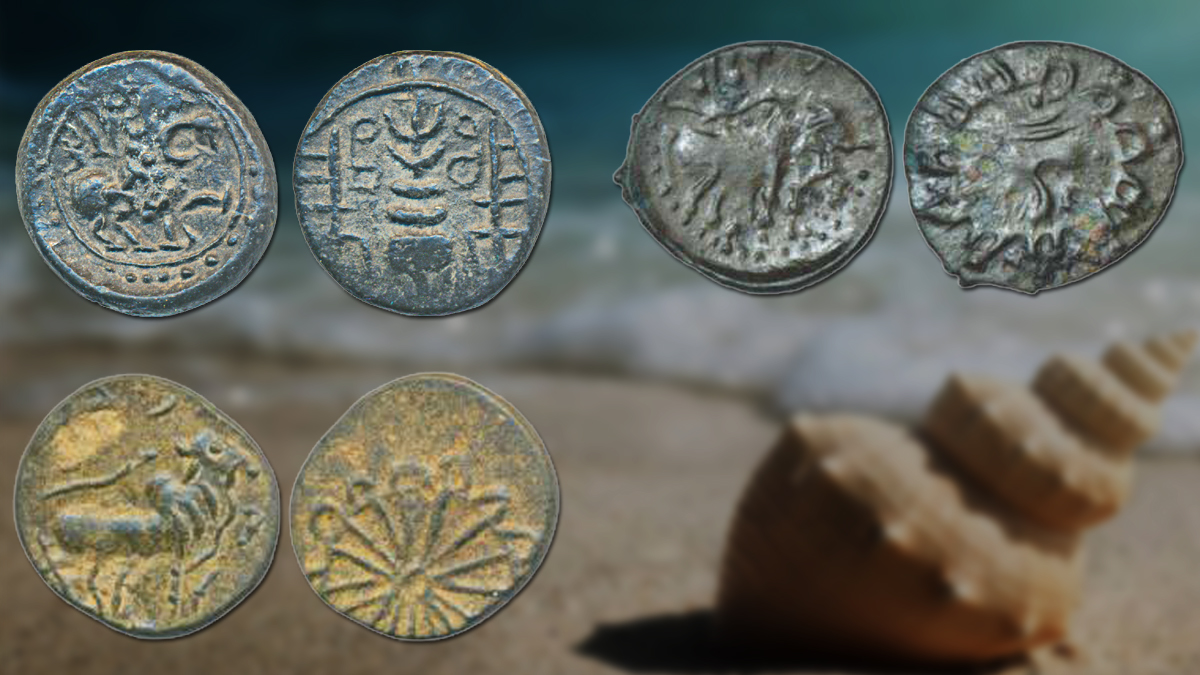 Another coin issued from the Vishnukundin dynasty depicts a ‘conch shell between two tridents, srivatsa placed over conch and what appears to be ’Shri’ in Brahmi on either side.

One of the coins issued by Pallavas of Kanchipuram depicts Bull standing to right, crescent, Shrivatsa, ‘snake’ above on the obverse side, and Shanka shell within lotus border on the reverse side of this coin.

Coins issued by the Pallava dynasty had given the same importance to other symbols like lotus etc. 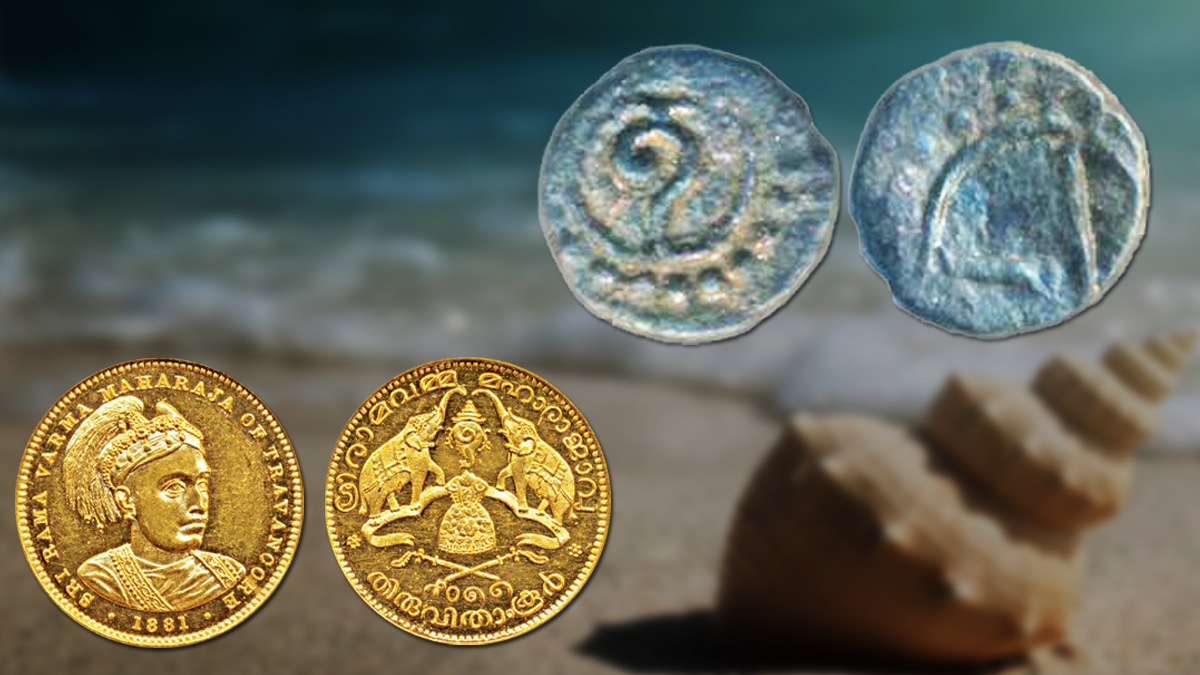 During the medieval period, Conch was a symbol that was used as an emblem of the Travancore state. The Kingdom of Travancore had used Conch Shell vintage coins on their national flag and even in their Coat of Arms. We can also see the image of the Conch shell on their coins the gold Sovereign issued by king Rama Varma V. The obverse of this coin depicts the bust of King and the reverse of this coin depicts Coat of Arms.

The Vijaynagar Empire had also made use of the Conch Shell vintage coins theme. This gold pagoda was issued by Vijaynagar King Krishnadeva Raja. The obverse side of this coin depicts Krishna as Bal Gopala seated, flanked by conch shell and chakra. Chonchell also appeared on the Raja Raja Chola Copper coin.

Also, read about Kadamabas of Banavasi and Satavahanas coin motifs and symbols.