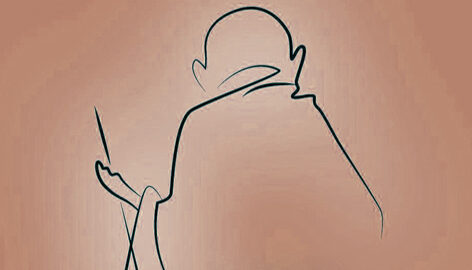 We use paper money or notes on a daily basis and are used to see the portrait of Mahatma Gandhi on every Indian Rupee Note. But what do we know about the origin of Indian paper money? Do we know when, why, and how Indian paper money came into existence? But, now we have an opportunity to learn about old Indian Currency through various online museums for banknotes.

In October 1987, a Five-Hundred first rupee note in India was released to cope with the rising demands of a growing economy and falling purchasing power. This was the first paper currency in India that Gandhi’s portrait was printed on a banknote. Its watermark window depicts the Ashokan Pillar capital (national emblem) superimposed over 6 wheels. Portrait of Gandhi is depicted beside the language panel with the text ‘M K. Gandhi’ in Hindi and English below. Braille identification of five small black horizontal lines is printed in the lower left of the watermark window. On the reverse, there is an image of Gyarah Murti- these sculptures are the depiction of Mahatma Gandhi collectibles that lead the nation with a rising sun in the background. This issue was later withdrawn from circulation due to large-scale forgeries. A new grey color 500 Indian rupee banknotes were introduced later. 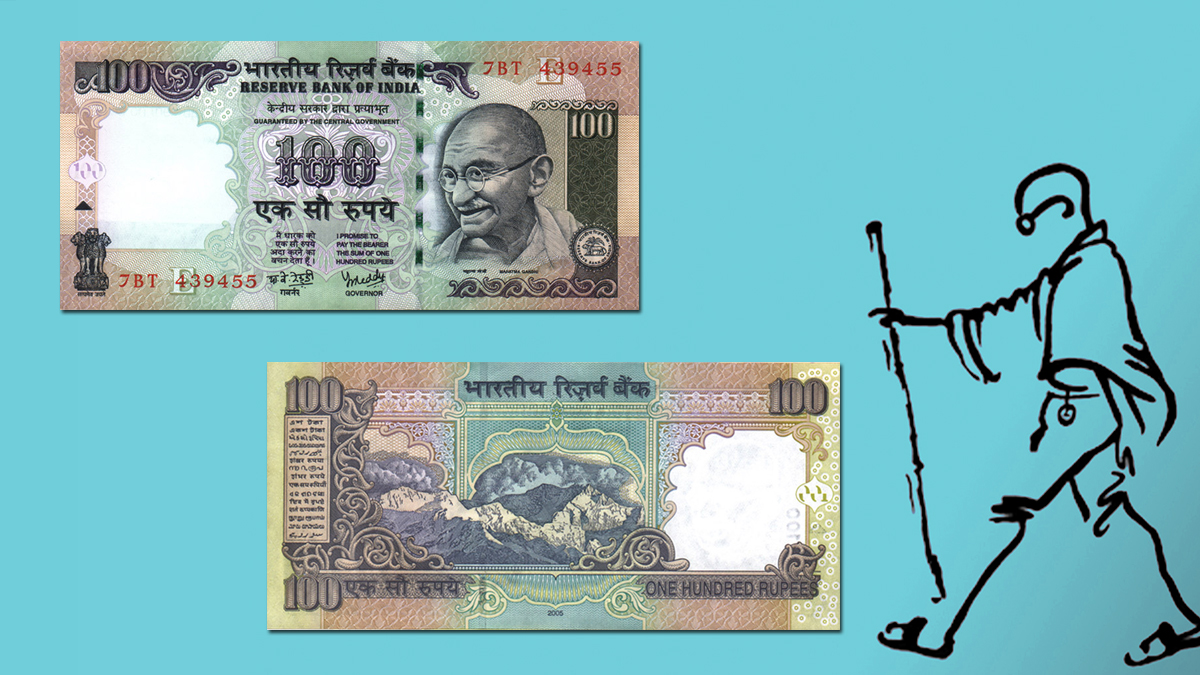 The Reserve Bank of India issued commemorative banknotes of the Mahatma Gandhi Notes series as legal tender in 1969 to honor the birth centenary of the Father of the Nation. Their colorful and vibrant notes were issued in denominations of 1, 2, 5, 10, and 100 Indian rupee notes. The 1 Indian rupee banknote portrays the Mahatma Gandhi Birth Centenary Commemorative coin of 1969 in the vignette. It is signed by Special Secretary, Ministry of Finance I. G. Patel. The Reverse side shows a commemorative coin with Ashokan Pillar in the center. The rest of the commemorative series notes (2, 5, 10, and 100 rupees) depict Ashokan Pillar in the front and seated Gandhi reading a book at Sabarmati Ashram, Ahmadabad on the reverse. These notes were signed by Governor L. K. Jha and B. N. Adarkar. 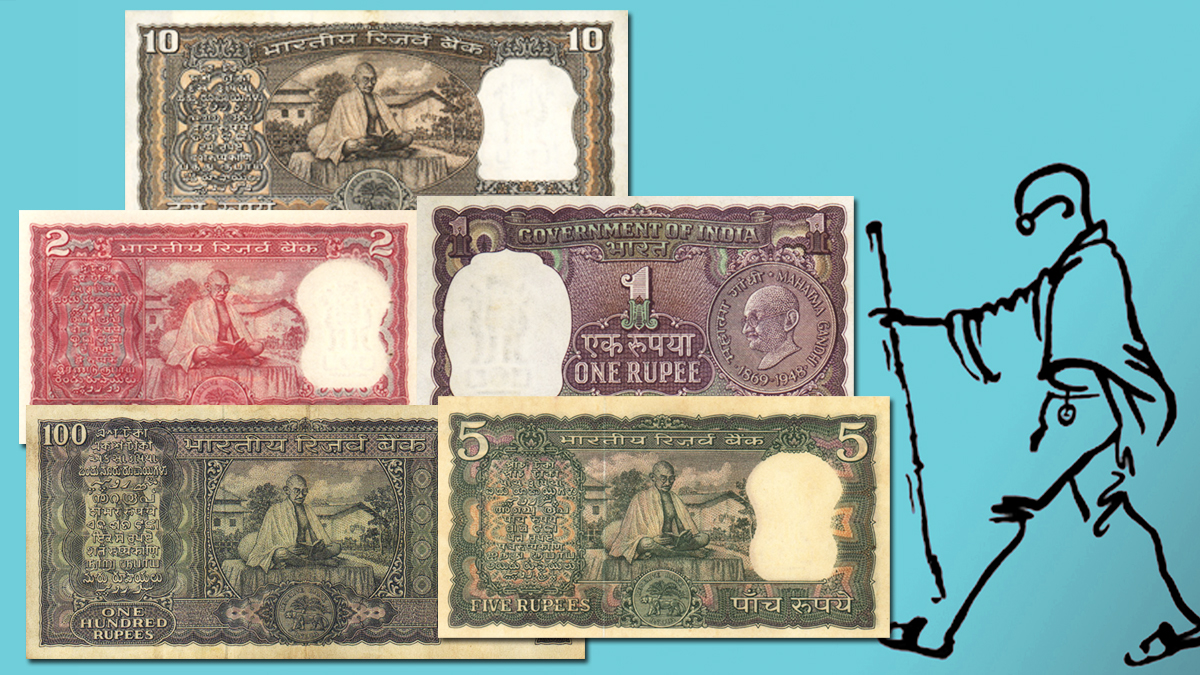 The advancement of reprographic techniques rendered traditional security features of the currency notes in India was inadequate. As a response to these developments, a new series called the ‘Mahatma Gandhi Series Notes’ was introduced in 1996. All notes of this series bear the portrait of Mahatma Gandhi on the obverse. Moreover, the clear windowed watermark, which hitherto had been the Lion Capital of the Ashokan Pillar, had been changed to depict the Gandhi portrait. The new features variously included clear text on security thread, fluorescent ink, micro prints, see-through register, a latent image on the obverse, as well as intaglio recognition feature of the visually handicapped. Banknotes were introduced in denominations of 5, 10, 20, 50, 100, 500, and 1000 Indian rupee notes. 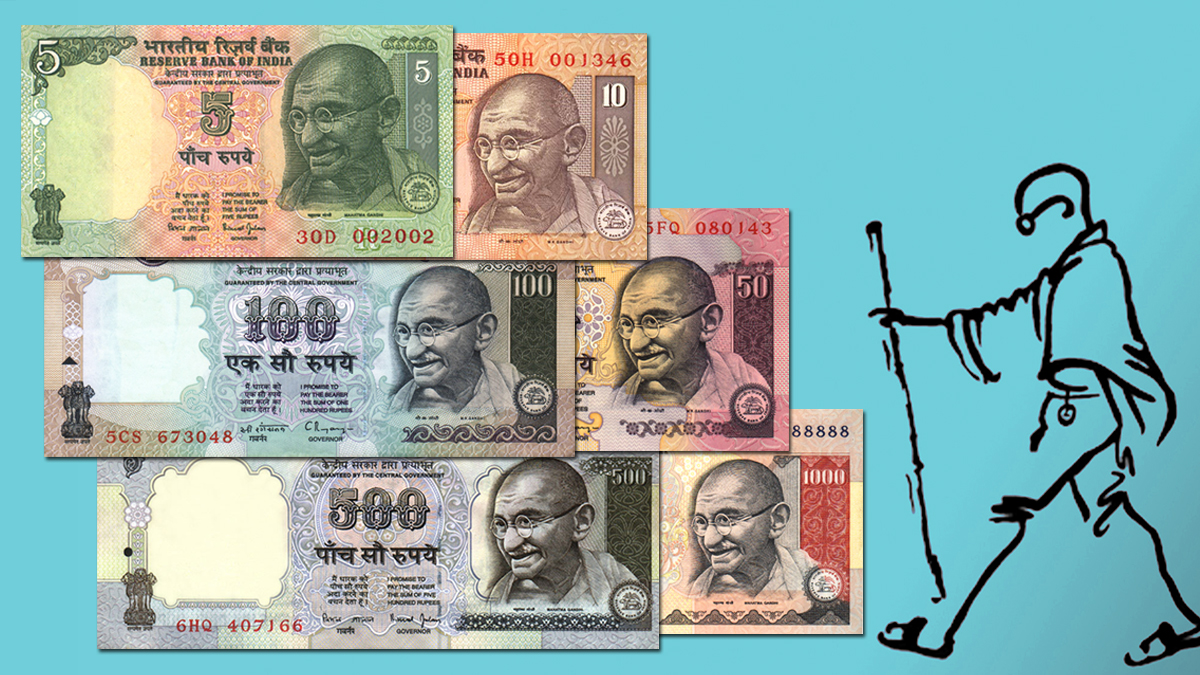 The Government of India on 18th November 2000 brought out new five hundred rupees note in a new color scheme (Grey to Green). These notes have additional features like optically variable devices which change color when viewed from different angles. Rest all features, obverse, and reverse design, etc. remained the same. The same enhanced security features were also printed on the one thousand rupee banknote which was introduced on 9th October 2000. Mahatma Gandhi on five hundred rupee note depicts a collage of India’s achievement in Science and Technology on the reverse.

The Mahatma Gandhi series note in 2005 observed new security features in one hundred rupees and above denominations. The watermark window now depicted five horizontal bands instead of the flower design printed previously. A 3mm wide security thread with color shifting from green to blue when viewed from different angles was introduced as well. A new front-to-back see-through register above Ashoka Pillar reads 100 when viewed against the light. Additional circular floral prints were added on either side of Reserve Bank of India on the obverse and in the right margin on reverse. Year of printing on the banknotes was printed for the first time on the back. No change was made in Rs. 5 notes.

The Reserve Bank of India 2006 issued a star series Indian Rupee Note with a * (Star) after the first three characters or prefix followed by the six digits serial number. These are used as replacement notes for errors in printing. As a part of the Reserve Bank’s effort to benchmark its procedures against international best practices and also for cost-effectiveness, this STAR SERIES was initiated.

These notes were available in the earlier stages only in 10, 20, and 50 denominations. However, from 2006 star or replacement notes are issued in 100 Indian rupee notes as well. The star series is identical to the existing banknotes in every aspect except an additional character viz. a * (star) in the number panel. Packets with star series notes have 100 pieces as usual but not in serial order. To facilitate easy identification of note packets containing star series notes, the Reserve Bank has issued bands on such packets indicating its presence. 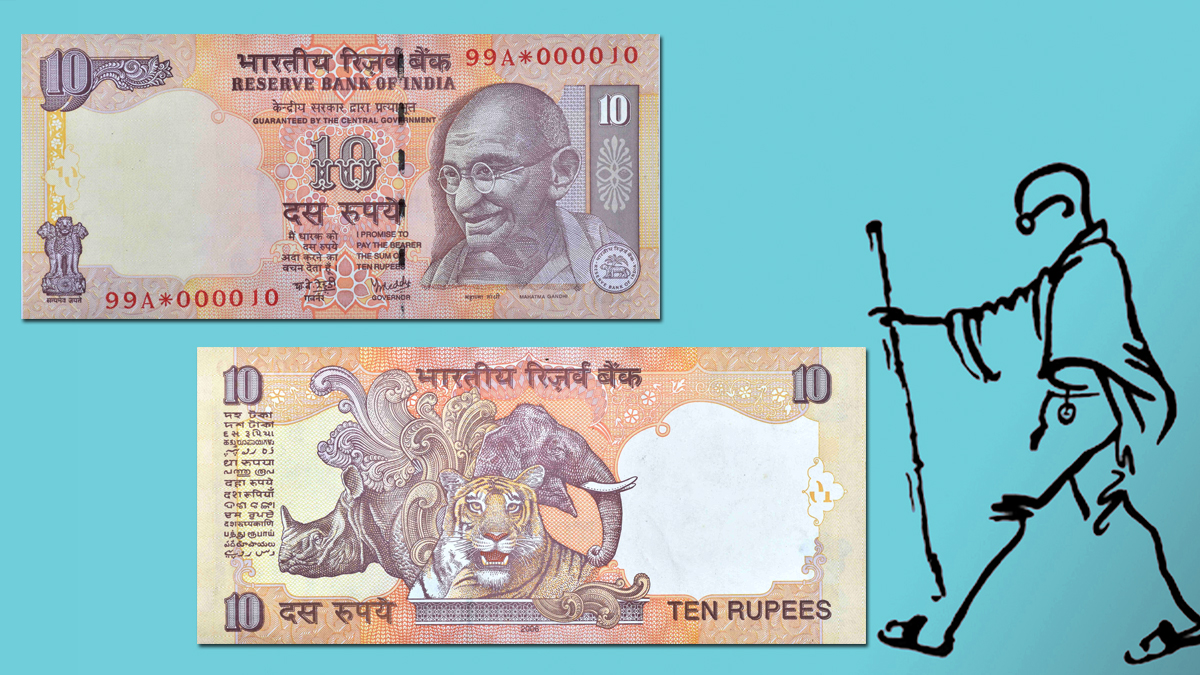 The new Indian currency symbol was introduced in 2010 and by the following year on Indian Rupee Note, it was incorporated in all banknotes and coins. On 5th March 2009, the Indian government announced a contest to create an Indian rupee sign. Five symbols were shortlisted from 3331 entries. The selected design was the symbol created by Udaya Kumar, Associate Professor of IIT Guwahati. The new design was a combination of the Devnagari letter “ru” and the Latin capital letter “R” without its vertical bar. The parallel lines at the top (with white space between them) are said to make an allusion to the tricolor Indian flag and also depict an equality sign that symbolizes the nation’s desire to reduce economic disparity. 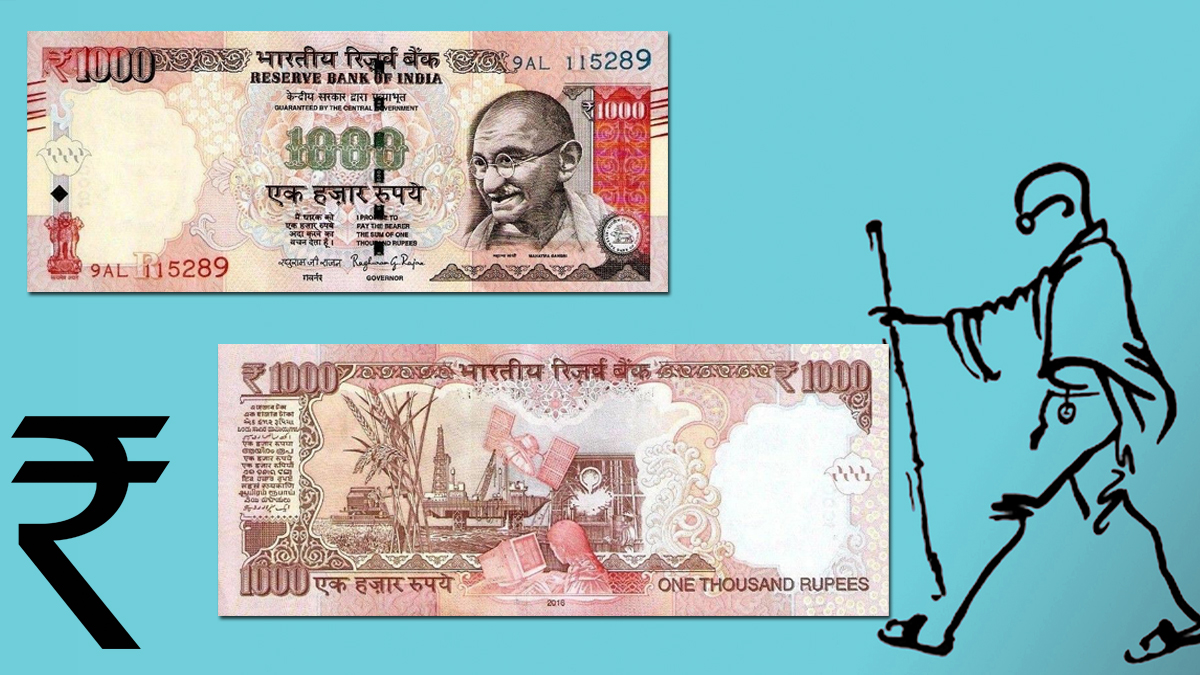 Universally, the standardized practice of intervallic advancement is usually adopted by central banks to stay ahead of counterfeiters. During 2015-16, the Reserve Bank printed banknotes in the Mahatma Gandhi Series 2005 with a new numbering pattern in all denominations except and Rupee20. The numerals of both the number panels ascend in size from left to right, whereas the first three alphanumeric characters (prefix) remain constant in size. These were called exploding or telescopic numbering systems. Printing the numerals in ascending size was a visible security feature on Indian Rupee Note which enabled the public to distinguish a genuine Indian banknote from a counterfeit one.

Keep tuned to our online museum for banknotes and know the exciting origin of Indian paper money.