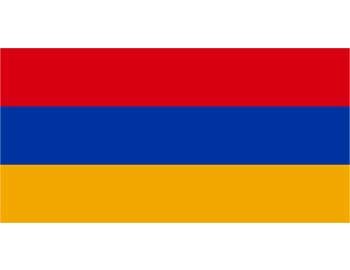 Armenia is one of the few nations that have managed to survive repeated invasions, destructions and persecutions. The people have been described through the centuries as adaptable, resilient, enterprising and steadfast. In their entire course of history, Armenians have rarely played the role of the aggressor. Rather, they have excelled in producing unique architectural monuments, sculptures, illuminated manuscripts, literature, and philosophical and legal tracts. Moreover, a number of important philosophical and scientific works from other cultures have survived only in their Armenian translations. Despite all their accomplishments, history leaves a small space for Armenia, and even smaller for its coinage. Today we explore coins of Armenia and its history to make sure that they get a well-deserved place in the world. 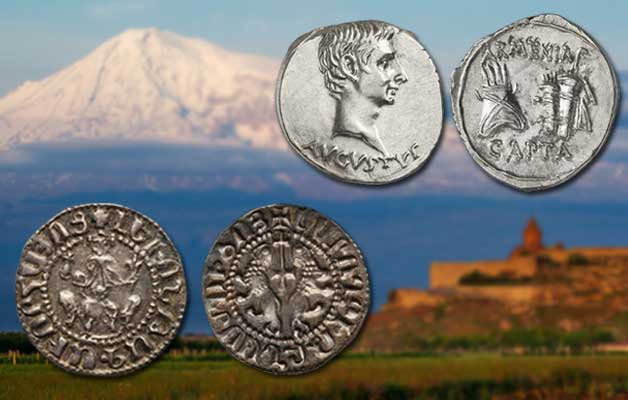 The oldest coins of Armenia found in its territory belong to Ionian city of Miletus. The two silver diobols date back to the 6th-5th century and were found during the Erebuni excavation. At the Hellenistic age, military campaigns and cross-border trade facilitated the appearance of coins of Alexander the Great, Seleucid, Athenian, Parthian, Roman, Cappadocian coins to Armenian market.  In the middle of the 6th century, Armenia fell to the Achaemenid Empire. King Oront (or Yervant as mentioned in the American sources) began striking coins in Spohene (Tsopk) which are on record the earliest Armenian coins. These Hellenistic style coins show an image of the ruler (profile of king in a unique pointed headdress) on the obverse and various mythological scenes on the reverse.

In 190 BC, the battle of Magnesia against the Romans weakened the Seleucid Empire. Artaxias took advantage of this opportunity and declared independence. The first kings of this Artaxiad dynasty did not mint coins in their own names. Silver and copper coins were made at Artashat, Tigranakert and Syrian cities of Antioch and Damascus, which were ascribed to Tigran I and Tigran II. The obverse depicted the king’s profile with Armenian tiara (crown) featuring the 8-pointed star (the Sun) and two eagles looking at each other. The reverse showed mythological scenes as well as names and titles (‘King Tigran’ or ‘King of Kings Tigran’) of the kings in Greek. The most interesting coins of Armenia belonging to this dynasty are the silver tetradrachm of King Artavasdes II depicting Goddess Nike and copper coin of Tigran IV depicting a queen. Coins from Parthia, Roman Republic, Seleucid Empire, and Cappadocia were also in use. Once worn-out, the coins were re-melted for a new production, thus making it impossible to find out about the volume of circulation of Armenian coins of that time. 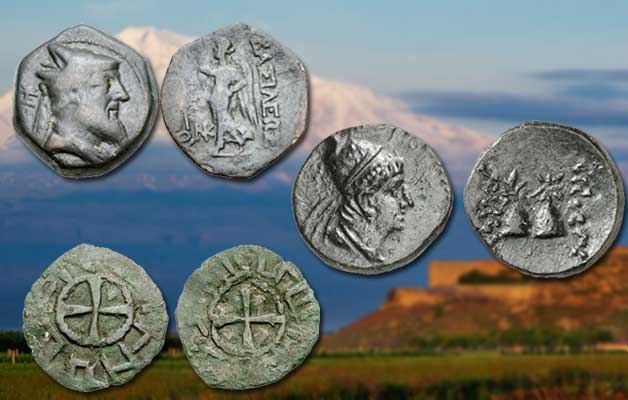 Armenia found itself in a complicated situation after the downfall of Artaxiad dynasty, becoming an apple of discord between Rome and Parthia. Under an agreement, the Parthian Arsacid dynasty was formed. In the ancient world, only an independent ruler was entitled to mint coins and since the Armenian representatives of the Arsacid Dynasty were dependent on the Parthians, they did not have this right. However, copper coins from the city of Artashat were found dating back to the 1-2nd century. These coins of Armenia feature Greek legend ‘Artashat’ with Goddess Tihveh, the keeper of the city, Goddess Nike, or a palm branch.

Other coins which circulated during this period included the Parthian coins which emulated the Hellenistic style.  The obverse of the coin featured the profile of the king, while the reverse showed a sitting man carrying a bow and titles of the king in Greek. Arsacid dynasty’s decline was followed by Armenia’s loss of independence after the Sassanid invasion. Coins of Sassanid Empire were put into circulation in the 3rd century followed by coins of Byzantine Empire in the 5th century. 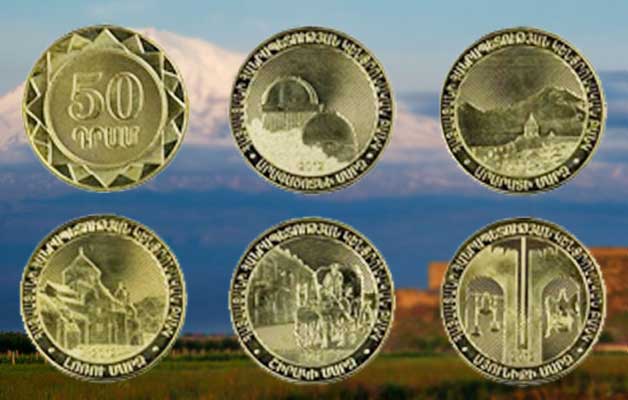 After being conquered by Arab Caliphate, during the second half of the 7th century, coins of the Umayyads followed by that of Abbasids were used in circulation. At the end of the 10th century, silver dirhams were replaced by the Byzantine gold coin and copper follises which later took a lead role in the region at the time. In the 11th and 12th centuries, coins of Seljuk and other Muslim rulers began penetrating into circulation. Coins of Armenia were not struck during the reign of the Bagratid dynasty of Ani (885 – 1045), although copper coins issued under the king Curice II (1048 – 1089) are known. These coins resembled the Byzantine nameless follises, though they had names of the kings and other writings in Armenian engraved. These are the first coins on record which bear Armenian inscriptions.

At the end of the 11th century, an Armenian state was established in Cilicia, which lasted a little more than three hundred years (1080 – 1375). The history of this state was divided into two periods of princedom and kingdom. Under the princedom era, some princes of the Rubenid dynasty issued copper coins which were influenced by Crusader-era illustrations but were in Armenian inscriptions. Silver, copper and sometimes billon coins were minted during the kingdom era beginning with King Levon I. The silver coins were called dram or tagvorin while the copper coins were named dang, qartez, or pogh. The coins of Cilicia stand out for their original iconography that combines Armenian, European and Oriental elements along with Armenian inscriptions. 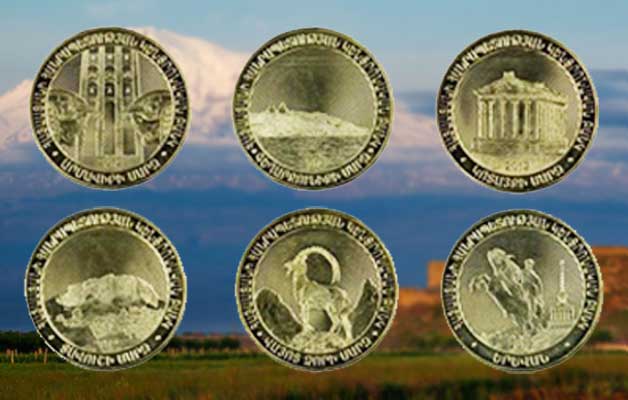 Early in the 13th century, copper coins of Georgian royalty, especially those of Queen Tamara were in circulation in the northern and eastern parts of Armenia. Silver dirhems and copper fals of Mongolian Khans appeared next in circulation. Later, coins of different Muslim dynasties of Turkic origin were used. From the 16th century until the 1820s, coins of Iranian Shahs dominated. There were copper, silver and gold coins of Armenia minted in many Iranian towns and Yerevan.

Eastern Armenia was annexed to the Russian Empire in 1828. For the first time ever, 3, 6, and 12 ruble platinum coins were minted until 1845. As a result of reforms, gold monometallic-based paper money and coin systems were optimized to become one of the most advanced systems in the world. Among the most interesting ones are 1 and, 5-ruble commemorative silver coins, timed to most important events in the Russian Empire. Copper coins had face values of 1/4, 1/2, 1, 2, 3 and 5 kopecks, billon coins – 5, 10, 15 and 20 kopecks, silver coins – 25, 50 kopecks and 1, 1,5 rubles, gold – with a face value of 3, 5, 7 rubles 50 kopecks, 10 and 15 rubles. Unusual gold coins with a face value of 25 rubles, 37 rubles 50 kopecks are of special interest. After the February Revolution of 1917, the currency of Russia’s provisional government entered into circulation. Only paper currency was used at the time. No coins were minted.

Following Armenia’s independence in 1991, it continued to use the Russian ruble until 1993, when it reformed its own system and introduced the dram, at an exchange of 200 drams per ruble. The dram was divided into 100 lumas; because of inflation, the luma is no longer used in daily commerce, such as for coins or stamps. The first Armenian dram coins were introduced in 1994 in denominations of 10, 20, and 50 luma, and 1, 3, 5, and 10 drams. Officially, all the coins of Armenia remain in circulation but today only the 10-dram coin remains widely used. All of the coins are minted from aluminum alloy and feature the value and year of minting on the obverse, with the Armenian coat of arms on the reverse.

New coins were released in 2003 and 2004 in denominations of 10, 20, 50, 100, 200, and 500 drams. The new release features coins minted from a variety of metals, giving each coin a unique colour. Like the original release, all coins of Armenia feature the value and year of minting on the obverse with the Armenian Coat of Arms on the reverse.

The imagery of the Armenian dram signifies the country’s Orthodox Christian heritage. But modern border disputes with Turkey and Azerbaijan have made Armenia’s dependence on foreign goods more costly and contributed to a large trade imbalance. This has depressed the value of the dram. Despite these issues and Russian influence on the energy sector, the country’s economy is well managed, liberalizing, and has posted consistent growth with low inflation since independence.

Many large and powerful states have disappeared throughout the ages. But Armenia, despite all odds has survived. How they managed all the difficulties while at the same time continued to make significant contributions is what makes Armenia amazing.

Stay with us to know more about world coins. Keep collecting and exploring until then.