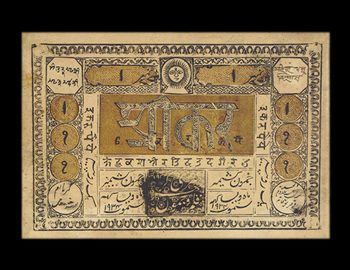 One rupee Osmania Note of Hyderabad

Hyderabad was a prominent Princely State of British India and was known as the “The Dominion of his Exalted Highness, The Nizam”. This Princely State got its right to issue metallic currency by the British Government with other thirty-four Princely States.

During World War I, the currency situation in Hyderabad faced many difficulties. The state was unable to meet money demand of the market due to the shortage of silver. This serious circumstance forced the British Government in 1917 to permit Hyderabad State to print its own paper currency. In the same year, Hyderabad Currency Act was proposed which received the assent of the Nizam. The currency was denominated as ‘Rupiya Sicca Osmania’- it was named after the Nizam of the state.

In 1918, a small denominational currency note of one rupee was proposed to be introduced to facilitate the circulation of money within the general population. In 1919 one rupee note came from the Waterlow & Sons Press, London. 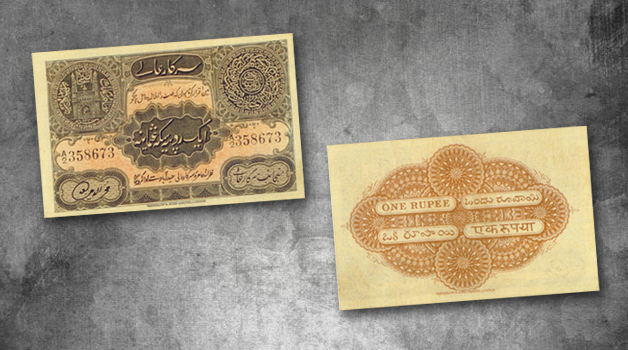 This one rupee note’s text was printed in Urdu and was called Karansi Note Sarkar-e-Ali. These notes had their date in the Fasli calendar. This calendar was introduced in Deccan region during the Mughal period and was adopted as the official calendar by Asif Jah, a Nizam of Hyderabad State.

This denomination was printed on continuous sheets of watermark paper and was cut randomly. It is also interesting that the variation noticed in the watermark of this note depends upon the way paper has been cut.

Notes with prefixes A, B and C were printed in one rupee Osmania notes of Hyderabad. Yet, in circulation, the notes only with prefix A were released. The first signatory of the first issue of the one rupee note was Fakhruddin Ahmed. The signatory designation was Sadr-ul-Muham Finance or Moin-ul-Muham of Finance of Hyderabad State.

The above-shown first one rupee note was discontinued in 1920 CE or Mir 30, 1330 AH. This note lacks the popularity due to its black colour. It was withdrawn from the circulation in March 1939.

All the notes of Hyderabad were received unsigned from the London Press. Later on, the signatures were impressed by machine at Hyderabad mint press till 1925. 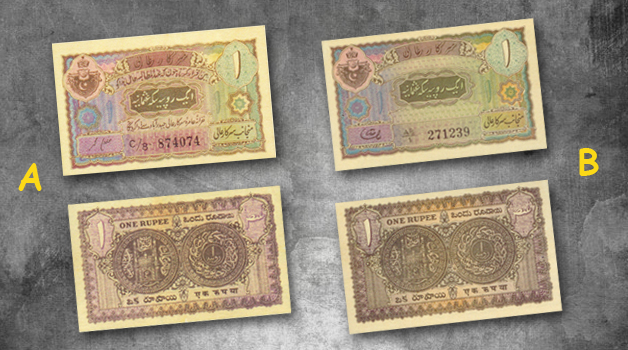 In the period from 1920 to 1942 CE, Hyderabad didn’t issue notes in One rupee denomination. In 1943, World War II was in its prime and the currency crisis was glaring due to the scarcity of silver metal. The Nizam of Hyderabad supported British in the war efforts with funds and manpower. To arise from this circumstance it became a necessity to introduce one rupee denomination again in circulation within the border of Hyderabad State.

The printing order was given to the Nasik Security Press but due to some circumstances beyond their control, they were unable to compile and execute this order. Thus, this assignment was entrusted to the Government Central Press at Malakpet, Hyderabad.

In 1943, the second issue of one rupee note was introduced. This note consisted of a Promise text similar to the other denominations. The method of printing this note was called Photo-litho offset process.

This note’s cutting, numbering and printing of signature was done at the Nizam’s mint. The type 2 of this denomination do not consist prefixes ‘I’ and ‘O’ due to the similarity between numerals ‘One’ and ‘Zero’.

In 1946, One rupee note was reprinted with the signature of Zahid Hussain. This note is considered as the type 3 of the second issue.

This type 3 issue does not depict the Promise text in Urdu. The two lines of Urdu above and below the denomination panel were deleted from the design.

The above-shown note (image B) was signed by Liaqat Jung. The notes illustrating his signature consist of the prefixes Y-Z, AA-AB. The prefix ‘Z’ appeared for the first time in this series. This note type does not have prefixes ‘ I’, ‘O’, ‘AL’ and ‘AO’. In this series of notes, each prefix consists of 10 further sub prefix, for eg: A/0-A/9.

The coin which appears on the reverse side of both the issues of one rupee note depicts Hijri year.

September 1948, the rule of Nizam ended and Hyderabad was annexed into the Indian Union after the Hyderabad Police Action. The Indian Currency Regulation Act issued in 1950 came into effect from April 1, 1955. According to which   Indian currency became a legal tender in Hyderabad. Hyderabad was the only Indian Princely State that was permitted to continue the issue its own notes after joining the Indian Federation in 1948 and the Republic of India in 1950. The banknotes of Hyderabad were issued until 1954 under the ruling Nizam of Hyderabad, Mir Osman Ali Khan.

Due to financial crunch faced post-independence and the shortage of metallic coins, these notes acted as a substitute. These notes were signed by the Government of India Administrators like D.R Pradhan, C.V.S. Rao and G.S.Melkote. 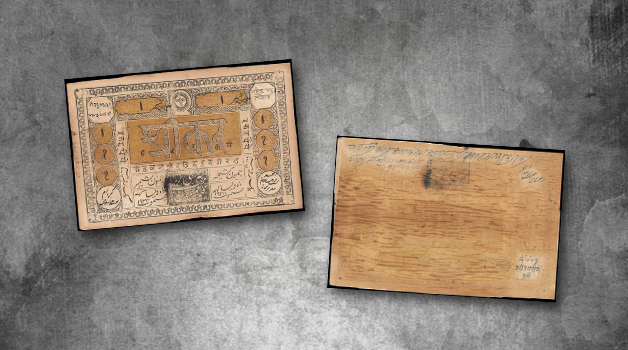 Jammu and Kashmir was the Princely State of British India ruled by the Dogra rulers. The state issued its first paper currency in 1877 during the reign of Maharaja Ranbir Singh.

This one rupee note was printed in Vidyavilas Press, Jammu. The watermark paper used by the Princely States was made by the Wiggins Teaps & Company.

The calendar systems used on these notes for the date was Vikram Samvat and months were taken from the Saka Samvat.

This one rupee note of Jammu & Kashmir ceased to exist after 1948 when the Princely State joined the Independent Union of India.

The journey of these one rupee notes of the Princely States of British India ended, today these notes are collectable specimens for the collectors throughout the globe. But don’t go away stay in touch because we will bring more exciting details of one rupee notes of India in coming days…