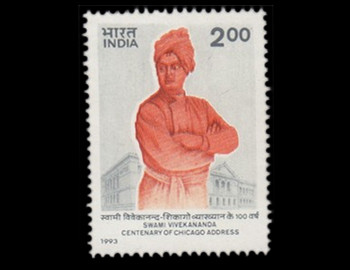 “We must not only tolerate each other, but positively embrace them, and that truth is the basis of all religions”. The tolerance-intolerance issue in India is one of the most controversial topics of recent times. Many renowned scholars and veterans have spoken widely on it justifying their perspective in debates and discussions. There was however, one man who preached universal tolerance 153 years ago, before all the hype. Meet the great monk- Swami Vivekananda. 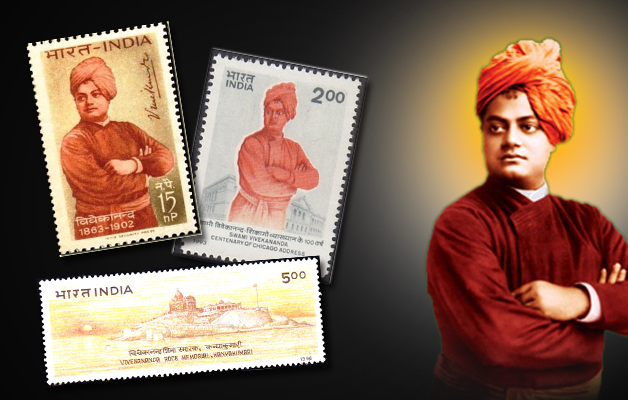 A man with a mission, his life teachings focused on education, religion, and national integration. He enriched religious consciousness through the rational teachings of the Vedanta philosophy and eventually become India’s spiritual ambassador in America.

Born on 12th January 1836, Swami Vivekananda met Ramakrishna Paramhansa during his religious journey and earned the name ‘Swami Vivekananda’ in due course. In his short lifespan of thirty-nine years, he delivered innumerable lectures, wrote inspiring letters, and composed numerous poems which touched upon many lands. He breathed his last on 4th July 1902 and since then, many stamps of Vivekananda were issued to honor this great individual.

A First Day Cover was issued on 17th January 1963 to celebrate his birth centenary. The printed logo of Ramakrishna Mission of which Swami Vivekananda was the President, can be explained in his words: “The wavy waters in the picture are symbolic of Karma; the lotus, of Bhakti (Devotion); and the rising sun, of Jnana (Knowledge). The encircling serpent is indicative of Yoga and the awakened Kundalini Shakti (the Primal energy), while the swan in the picture stands for Paramatman (Supreme Self). Therefore, the idea of the picture is that by the union of Karma, Jnana, Bhakti and Yoga, the vision of Paramatman is obtained”. The stamp has a face value of 15 naya paisa, an Asoka Pillar watermark, and Vivekananda’s signature. 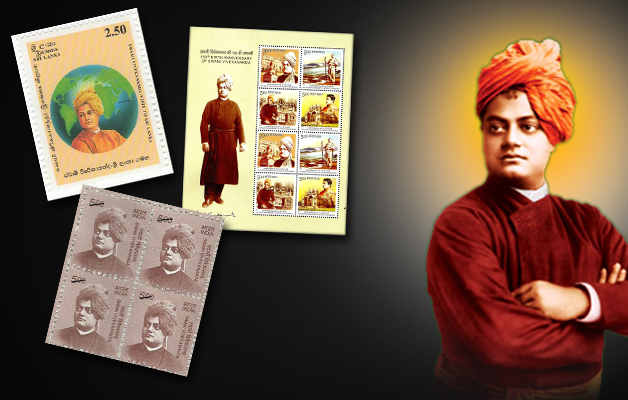 11th September 1863 was the day on which Vivekananda gave his world-famous speech in Chicago at the Parliament of Religion, where he taught Hinduism. He conquered the world on this day with his spirituality in practice. To commemorate this day, Indian Post Office issued a 2 rupees stamp marking its centenary in 1993 depicting Swamiji in his exclusive pose. India and America are not the only places he left a mark. On 15th January 1997, Sri Lanka issued a stamp to mark the 100th year anniversary of his visit to Colombo. This two and half rupees stamp shows Swamiji in the background of the world map portraying that his teachings reached far and wide.

During his journey on an exploration of India, he came across widespread poverty which broke his heart. He eventually reached the shores of Kanyakumari, where in frustration he dove into the water of Indian Ocean and swam to a large rock. Here he meditated for three days seeking an answer and eventually attained spiritual enlightenment. Considering the significance of the rock, a Vivekananda Rock Memorial was built in 1972. The Indian Post Department on 26th December 1996 issued a commemorative 5 rupees stamp of Vivekananda Rock Memorial, Kanyakumari on its 25th anniversary.

The year 2013 was observed as the commemorative year for his 150th birth Anniversary by the Ministry of Youth and Sports.  A set of four commemorative stamps and sheetlet were issued on 12th January 2013 by the Indian Postal Department. The top left Rs. 20 stamp shows Vivekananda against the backdrop of the Dakshineshwar Temple, Kolkata while the bottom left Rs. 5 stamp shows him at the Parliament of Religion, Chicago.  The top right Rs. 5 stamp shows him as a wandering sage and the bottom right Rs. 5 depicts him in the background of Ramkrishna Missionary, at Belur Math. All these artistic stamps depict his many milestones in life. 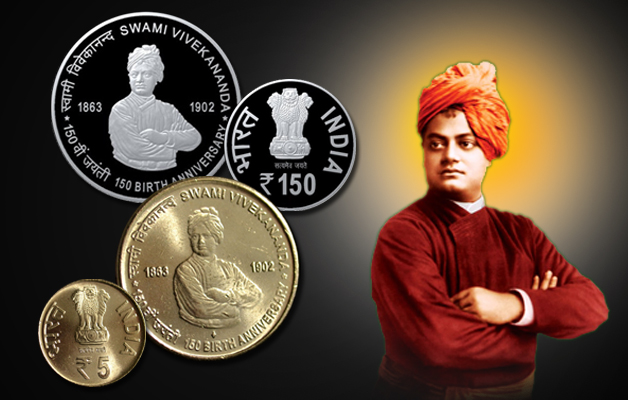 The Sri Lankan Postal Department was not far in honoring this visionary again. They issued a striking First Day Cover which illustrates the image of The Rock Memorial. The Rs. 25 stamp shows Swami Vivekananda n his patent saffron robes and a pagdi in his regal-self. An amazing unusual Rs. 150 commemorative coin was issued by the Government of India on his 150th birth anniversary. A Rs. 5 was also issued for general circulation. On the reverse of both coins is an image of the great man who made leaps and bounds progress in Indian philosophy.

A New 11th Definitive Series Rs. 5 stamp issued in 2015 explains the commendable significance of Swamiji, for he is still honored till recent times.

Such was the great personality of Swami Vivekananda. His birthday, in India, is celebrated as National Youth Day and he will always be remembered as the patriotic saint. Swamiji’s greatest achievement was when on 11th September 1995, The Chicago Art Institute named a street after him. The bronze plaque that read “Swami Vivekananda Way” is placed under a traffic signal, gesturing to move ahead on the path of truth and knowledge. Had he been alive today his ideas on tolerance would have surely made the world harmonious and happy. Though he died at a young age his message is eternal –

“Arise, awake and stop not till the goal is reached”.