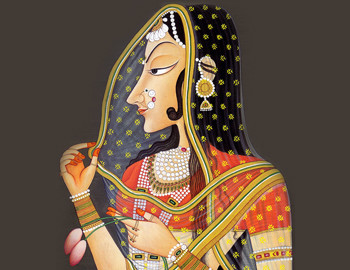 We see we observe and we perceive the nature around us! Colors are symbolic in nature. Everything on earth is colorful and uncovers a treasure of symbolism. Use of colors is nothing but an expression of faith and belief. And for a country like India which is known for its spiritual consciousness, almost everything and anything has profound meaning. Today, we will go through the colorful Stamps of India where we’ll see how the blending of the colors, themes, and messages creates a beautiful mélange of the diverse Indian Culture.

When we talk about colors the first thing which comes in our mind is painting. Since the time man came into the existence, he has been exploring himself with the various colors.

In the above picture (1.2) is the Bhimbetka rock painting. On 21st December 2013 India Post issued a special cover depicting one of the Rock paintings from Bhimbetka (1.1) and on the left of the cover is depicting Warli painting, a tribal art from Maharashtra. It also has a cancellation mark with ‘Bhimbetka- A Heritage of Great Civilization’ in English and Hindi.

But what if we tell you that there are stamps that portray some of the most beautiful miniature paintings? Merging paintings and stamps together is one of the best ideas. They are truly a blend of knowledge and art.

Have you ever heard of Miniature Painting?

Miniatures paintings are beautiful handmade paintings, which are colorful but small in size. Initially, in the 10th century, these paintings were done on the palm leaf and from the 14th century, it was done on paper. The highlight of these paintings is the intricate and delicate brushwork, which lends them a unique identity. The colors are handmade, from minerals, vegetables, precious stones, indigo, conch shells, pure gold and silver. The most common theme of the Miniature painting of India comprises of the Ragas i.e., the musical codes of Indian classical music. There were a number of miniature schools in the country, including those of Mughals, Rajputs, Deccan, etc.

Have a look on the following colorful stamps of India:

In the very first painting, the elephant is being tamed by a prince, artist Zain-al-Abidin. This tiny little colorful painting stamp has a face value of INR 2 was issued by India post in 1973.

The second stamp (Radha) depicts an Indian female holding her ghunghat in hand which is the very typical way of representing an Indian female. This miniature is popularly known as “Bani Thani” which is an excellent example of Rajasthan school of Arts. It portrays her with the distinct features like eyes like lotus, thin and sensuous lips, pointed nose, high eyebrows, narrow neck, etc. Because of its marvelous and outstanding intricate design, this has also been a feature on a stamp of India.

Among many love stories popular in Rajasthan, Dhola Maru is one of the most popular among the Rajasthanis. One can understand its popularity by the fact that every couple is enthralled with Dhola-Maru, a royal couple who existed in the 8th century. In every love song, ladies normally address their beloved as Dhola and the men remain mesmerized by princess Maru. The rural folks of Rajasthan even today sing songs of Dhola and Maru which has become the romantic tale in Rajasthan like the Romeo-Juliet saga.

This popular love story is painted in the medieval period and India has issued a stamp on this (Refer image 2.3). This art signifies the symbols of love, art, and color.

Image 2.4 depicts the dance duet. It is a miniature painting from Aurangzeb period.

These are indeed beautiful, aren’t they?

The above-described painting depicts the various human activities in various themes. Now let’s hunt in another world of miniatures and stamps! 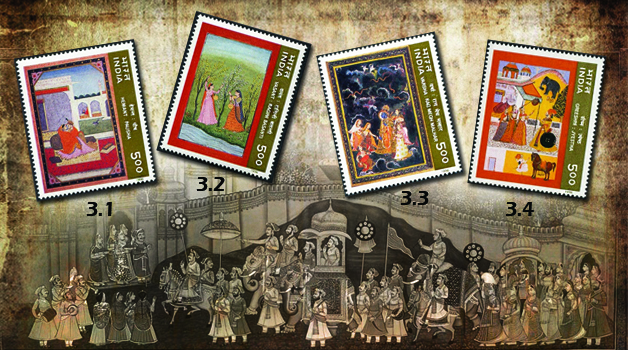 Miniature paintings are not stuck with one theme only but they also portray various themes.  India Post issued a set of four stamps on ‘Ritu Rang’ which highlights the different shades of color, Indian seasons and beautiful poetries!

Cold winds start blowing, skies are often clear; couples cuddle and enjoy the bonfire. This season is none another then winter. The image 3.1 perfectly depicts the cold weather where a couple is shown snuggling. The stamp clearly portrays the fine detailing and vibrant colors of the painting.

Vasant Ritu is the spring season where the flowers bloom, birds sing and every object of nature looks very beautiful. The poets love to describe the beauty of this season. The given stamp in the image 3.2 has a face value of INR 5. This stamp depicts some pretty ladies collecting the flowers on the bank of the river.

Rains are what we all wait for! The weather is cool and it is a life-giving season! This season is expressed in the form of a Rag Megh Malhar in praise of the rain, where everyone including the king is dancing and enjoying this watery season as seen in a 3.3 stamp.

Malhar is an old raga in Indian Classical music. It is believed that the Raga Malhar is so powerful that when sung, it can induce rainfall. Ragas are known to have such powerful compositions that when sung by a wise singer, were known to create an intense passion and impressions on the listener’s mind!

According to a legend, once when Akbar asked his court musician Tansen to sing Raga Deepak (The Raga of Light), the effect of this song was such that he lit up all the lamps in the courtyard themselves and later to pacify the raging fire Raga Malhar was sung!

The Ragas are categorized based on the era of their composition viz. Prachina (pre 15th century), Madhyakalina (15th to 18th Century) and Arvachina (19th century).

While the Greeshma is the Summer season when the sun is shining brightly in the sky! The warrior is deterred from going camping by his queens in the hot sun.

Each and every stamp is depicting the essence of the seasons in a radiant art form because colors speak all languages.

We hope you liked a journey of colorful stamps of India. India is indeed colorful! Art doesn’t need any language to express as art in itself is a way of expression!

Tip to Collect Stamps: You can start your own thematic collection of Stamps. If you love painting then you can start collecting the stamps which have paintings on it. You can purchase stamps depicting paintings of Rabindranath Tagore, Sailoz Mookherjea and Jamini Roy on our website.