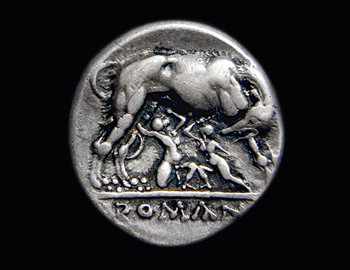 Human art is the reflection of nature, it’s nothing but an imitation and absorption of its gist. The coins created by humans are nothing but the inclusion of this art in his daily life. But this artistic nature of men took time to develop in the monetary system. The uniform coinage which depicted various elements of nature, mainly animals, came later in the human history when the urbanisation was at the height of its progress. The best example of this embellishment is the animals on Roman coins; the illustrative depiction of fauna on their coins is a beautiful part of their numismatic history.

The fauna has been an inspiration for many artistic works, so why should the field of numismatic be any different? The representation of the animal as the main design can be seen in the coinage of Roman Republic, Roman Imperial issues and Roman provincial coins. The motive behind depicting these animals was to commemorate an event, to connect with the legion, to connect with king or royalty, etc.

The coinage of Rome depicts animals in at least six varieties. But in this article, we are going to discuss only three varieties. 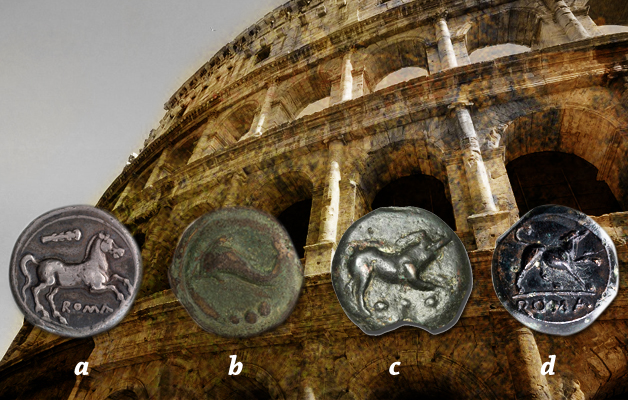 A prominent animal on Roman coins is the horse (a). The horse is loved for its strength, intelligence, speed, loyalty and beauty. It is associated with paying homage to the horses of war. The early struck silver didrachm illustrated prancing horse in 214 BCE with the bust of God Mars or Apollo with a horse’s bust. The Parthian horse coin of the Roman Republic is associated with the Quintus Labienus army in 40 BCE.

Roman coinage not only portrayed land animals but also aquatic animals like the dolphin(b). Dolphins are sacred to Neptune and on the coin of Agrippa, Augustus, Caligula, Vespasian and other Roman Emperors Neptune is depicted holding dolphin in his hand. This fish is also dedicated to Venus and in early Roman coinage, this aquatic mammal occurs on the denomination like Triens, Quadrans, and Sextans.

The most cherished animal was pigs (c)! Even before they issued coins, pigs featured on the cast bronze ingot (Aes signatum approx 1.746kg). This portrayal of the pig is associated with the ‘Flaming pig’ tactics roman army use to panic the elephants of King Pyrrhus. During the second Punic war, an emergency issue of roman gold represents the sacrifice of a pig to seal the oath of an alliance between Roman and one of its Italian allies. A running boar was the insignia of the 10th Legion (Legio X Fretensis), one of the most celebrated military units in Roman history.

The occurrence of dog(d) on the Roman coins was a common phenomenon. It first appeared on several small bronze coins of the Roman-Campania series minted around 210 BC. Later on, it showed up on the silver denarius series. The dog in the form of a hound was related to the philosophy of after-life or death. 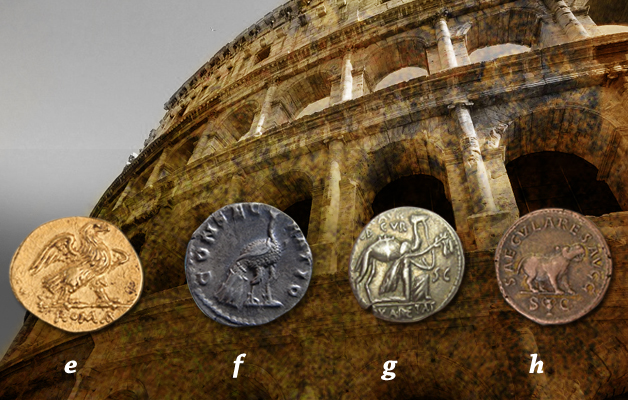 The artistic impression of birds on the Roman coins like Eagle (e) is quite alluring. The Eagle portrayed on Roman coins was a symbol of strength, courage, and immortality. It was called Aquila in Rome; this bird was the ensign of the Roman Legion as the mark of power and speed. It also represents Jupiter (king of Roman gods). The other bird seen on the Roman coins is a peacock (f) as the symbol of royalty and progress.

Romans also incorporated various animals like Camel both Bactrian and Arabic(g), Hippopotamus(h) on Octacilia Severa (wife of Philip I) coins on the 1000th birthday of Rome was a special issue.

There also many more animals seen on Roman coins like crocodile(i) as the emblem of province Egypt, Elephants(j) was depicted on the coins of Julius Caesar, Antelopes(k) of the coins of Philip I and II, Philip I also depicted lion(l) on his coinage represented the games organised during his sovereign. 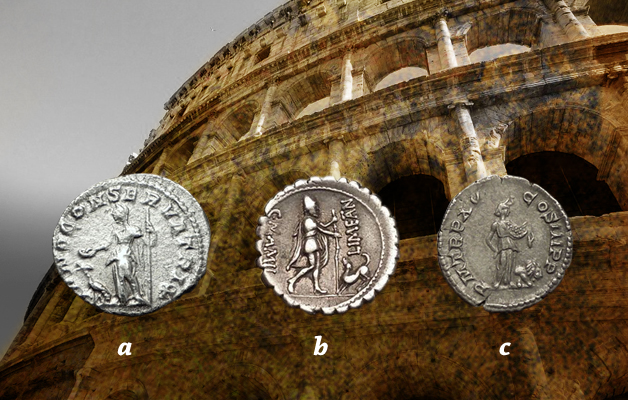 Till now we have seen how animals are struck on coins as the main design but now let’s see their association with the god and goddess. Roman coinage depicts eagle with Jupiter, Hermes with a rooster, Junos with peacock (a) and Minerva with an owl, etc.

These animals are either shown as a companion or as their vehicle, they are also illustrated due to the legends that link them with various Roman deities. The dog is associated with Diana (b) on C.postumius coins.

Sometimes the same animal is shown to be associated with two deities like the lions which depict Africa or Atargatis(c) on the Roman coin. 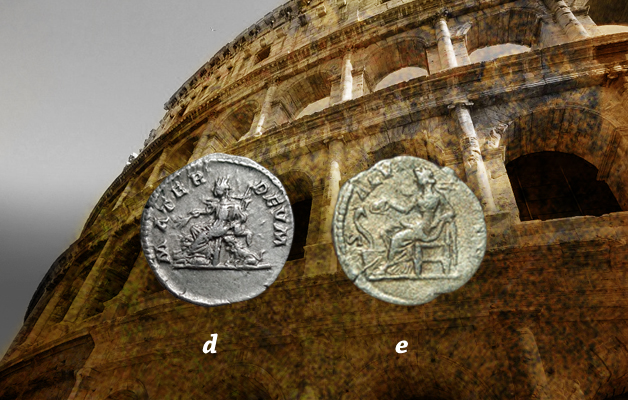 Roman coinage also pictures Snake on their coin with goddess Salus (e). She is often depicted feeding snakes on the coins. Snakes are associated with welfare and health.

The third category of this segment is associated with the mythological animals, a segment of the combination of two powerful animals as one! 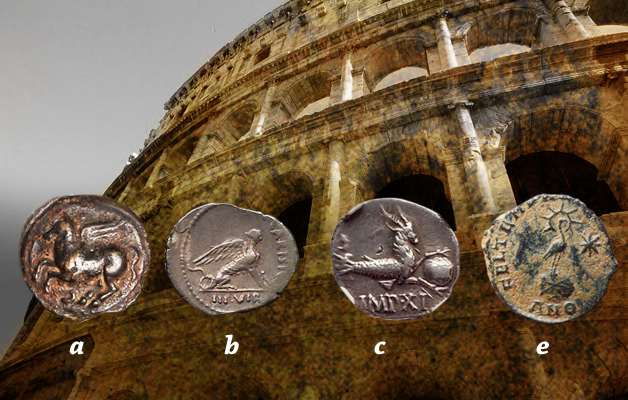 The Pegasus (a) or the winged horse is a fascinating animal modelled on Roman coins. It appears on the denomination like Double Litra, silver Denarii, Quinarius, denarius, etc. Pegasus, like the horse, is the symbol of strength, power and wealth. But its wings give it a royal status.

A sphinx (b) was the embodiment of Egypt. This animal was artistically depicted on Augustus Caesar coins. It rarely appeared on Roman coinage but it was always issued for the province of Egypt by Roman mint.

Emperor Augustus depicted his own Zodiac sign “the Capricorn” (c), a mythical being, on his coinage. He minted these coins picturing Capricorn as the symbol of his rule is divine, a phase of rebirth and the association of this zodiac with Saturn who ruled on the region of Italy was called golden age.

The last animal of this category is Phoenix (d). It appeared in the coinage of Constantius II. Phoenix was the symbol change and rebirth it also represents the philosophy of start after the end. The phoenixes are also illustrated in the later Roman currency when the empire was declining.

At the end of this whole analysis, I would also like to mention about the feature image of this blog which is the best example of animals associated with legends depicted on coins. It is the she-wolf depicted on coins nursing two youngling and twin brothers Remus and Romulus who later on kept the foundation of Rome and created the Senate which ruled over the Roman Republic.

Roman coinage is not the only one that depicts animals on their coins there are many empires in the past that has copied the art of nature on their monetary system. Even the modern coinage depicts fauna on the coins for an event, celebration, etc. This is just the first phase of animals on Roman coins there are much more surprises to come. You all will be amazed to learn how complex a human mind can be and how many complex ways he can associate an animal on the coins.

‘Animals share with us the privilege of having a soul’. So love them, protect them and collect coins depicting them. The whole concept of animal on the coin is fascinating, people who love animals and coins both can collaborate his\her hobbies and make a collection out of it.

Stay in tune with us for the next blog further explaining the different variation in the varieties of animals on Roman coins. Explore this fascinating section of numismatics study with us.