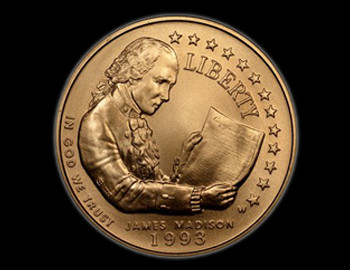 Born on 16th March 1751 to James Madison Sr. and Nelly Conway., James Madison Jr. suffered from epilepsy. At 5’4 and 100 pounds, he was often described as ‘small’ ‘quiet’ and ‘shy’ person. Yet this “small’ guy graduated from Princeton University and mastered over subjects like Greek, Latin, Hebrew, Political Philosophy, and Law. This ‘quiet’ guy reshaped American History by becoming a political theorist and American Statesman. This ‘shy’ guy became the fourth President of United States and served not one but two terms in the White House. James Madison, ladies and gentlemen, was an enigma.

We at Mintage World, let Mr. Madison speak for himself through his long list of philanthropic accomplishments with a special insight on coins and stamps featuring him. Take a seat and relax for Mr. Madison journey is no less than that of a superhero.

Due to the rising British taxation, the relationship between American colonies and British was strained. During this period James Madison was appointed a colonel in the Orange County militia. Due to unstable health, he gave up his military career for a political one. In 1776, he represented Orange County at the Virginia Constitution Convention where he drafted the state’s guarantee of religious freedom.  After two years on the Governor’s Council, he became the youngest member of Continental Congress. Here he arranged the 1787 National Convention to write a Constitution for the new nation. He came up with the idea of Virginia Plan, the system for a bicameral legislature which gave representation to the population in the House of Representatives, State, and the Senate. He introduced the idea of checks and balances which made it impossible for the political powers to be concentrated in one place. After the convention, James Madison along with Alexander Hamilton and John Jay began writing numerous articles now called the ‘Federalist Papers’ to establish the fact that a strong national government was important for the country to move past the weak Articles of Federation. A strong objection that came up here was the absence of Bill of Rights.  James Madison drafted nineteen amendments, ten of which were adopted as Bill of Rights. The importance of this event was such enormous that in 1993, the U.S. Government issued a Commemorative Five Dollars Gold Coin, One Dollar and Half Dollar Silver Coin in its honor.

“You give me a credit to which I have no claim in calling me ‘The writer of the Constitution of the U.S.’ This was not, like the fabled Goddess of Wisdom, the offspring of a single brain. It ought to be regarded as the work of many heads and many hands.”

Despite James Madison’s modest assessment of his contributions, few would deny him the title “Father of the Constitution. He soon retired from politics but returned when his long time friend Thomas Jefferson asked him to be the Secretary of State. He succeeded Jefferson and became the 4th President of the United States in 1809. In a way of honoring the Presidents, the U.S. government, from time to time, issues postage stamps and coins to commemorate them. One of the interesting features was the Presidential $1 Coin Program with an engraving of relief portraits of U.S. Presidents on the obverse. This program was enacted in 2005 which eventually resulted in large stockpile on unused $1 coins. The program was later suspended but the coins are still issued only for collectors.

James Madison also appears on three definitive stamp issues. On 10th December 1894, the Post Office issued a 2-dollar Madison stamp. The engraving for the stamp-design was created by Gilbert Stuart, who painted a total of four portraits of the president. The dark blue 2-dollar stamp was issued on 5th June 1903. The stamp image was designed by R. Ostrander Smith from a painting by an unknown artist. Both the stamps were often used by the Post Office for internal transferring of funds. Another Post Office 4c Madison Stamp was issued on 1st July 1938, as a part of Presidential Issue.

Madison finally appeared on a U.S. commemorative stamp when he was included in the AMERIPEX presidential issue released in 1986. In 2001, the Postal Service finally honored James Madison with a single commemorative stamp, issued for the 250th anniversary of his birth. The stamp was designed and illustrated by John Thompson.

A five thousand dollar bill was printed for 1928 and 1934 series. These notes are the scarcest and were printed for all twelve Federal Reserve except Minneapolis. Most of these types of bank notes were destroyed by the Bureau of Engraving and Printing but a hundred or so notes have not been redeemed and may be available in the market.

On the 15th September 1794, James Madison married 26-year-old Dolley Todd. She was the most famous first ladies in the U.S. history and was known for her graciousness and charm. During the ‘War of 1812,’ the British forces had invaded the White House. Here the brave Dolley Madison stayed until the last moment to secure important government documents including the portrait of George Washington before the British burned down the White House. This act of bravery became so famous that it was even portrayed on the First Spouse Gold Coin. Did you know that the U.S. government issued a mini-stamp of her to cut production cost in 1980? There is even a Commemorative Silver Dollar Coin issued in 1999. It shows Dolley Madison surrounded by Cape Jasmine Flowers against the background of Montpelier with lush willow trees and foliage.

Finally, in 1815 the war came to end by the signing of Treaty of Ghent.  When Madison left office, two years later, the country was prosperous. Despite the challenges he encountered during his presidency, James Madison remains the architect of America’s founding ideals. Regarded as a small, quiet intellectual, he co-founded the Democratic Republic Party, had the mountain range and river named after him and was the first President to wear trousers instead of knee breeches. His ideas and thoughts continue to shape America. And that is the legacy of James Madison. E Pluribus Unum!