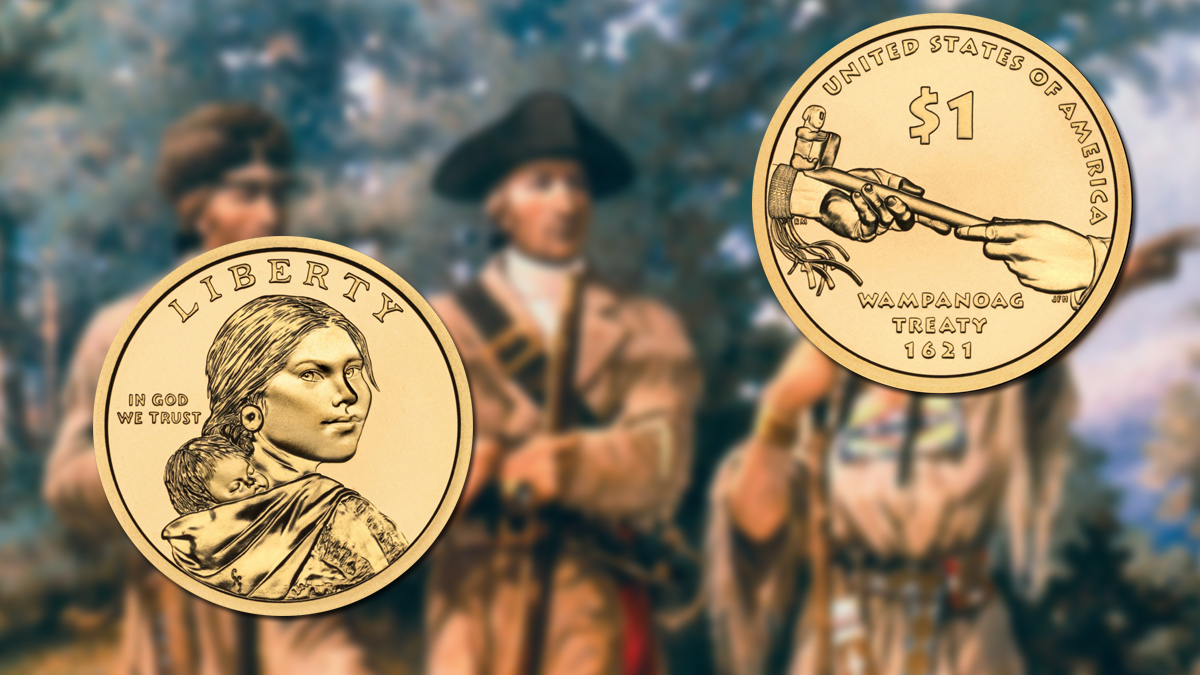 In 2011 Native American 1 Dollar coins were issued with the theme of the Wampanoag treaty of 1621 dollar coins under Native American 1 Dollar Coin. They issued this coin with the theme of the Peace alignment treaty between the Wampanoag Indians and the settlers of the Plymouth Colony. In 1621, the Ousamequin, the Massasoit, of the Wampanoag Indians, made a treaty with the English who settle at Patuxet, today popularly known as Plymouth, Massachusetts. According to this treaty, Wampanoag promised to defend the Plymouth settlers against hostile tribes. The settlers promise to step in if the Wampanoag gets attacked. The full terms record in William Bradford’s History of Plimoth Plantation.

This Wampanoag treaty 1621 dollar coin of US commemorative coins features two hands exchanging a peace pipe, which stands for the peace agreement between two groups. 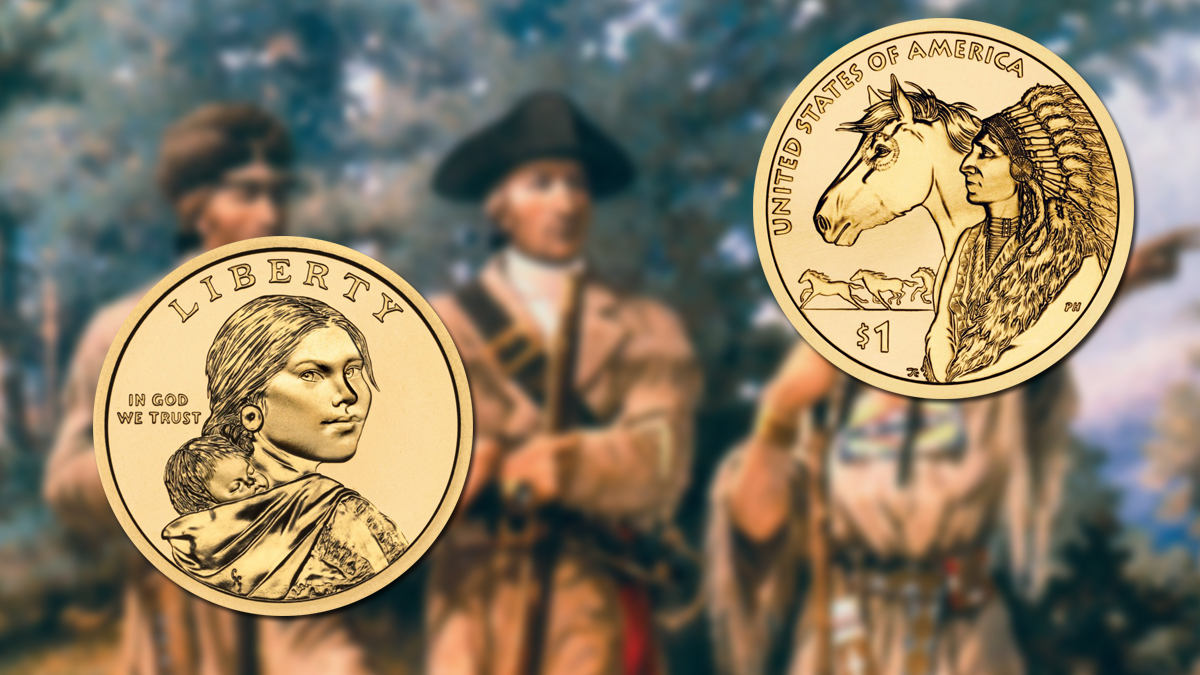 In 2012 the Native American 1 Dollar coin was issued with the theme of Trade and Economy. The Native Americans had maintained a widespread trans-continental, inter-tribal trade for more than a millennium.

The American Indian had maintained a good quality of internal tribal trade for more than a millennium. The Infrastructure of Native Americans had become the channel by which the exploration, settlement, and economic development in the colonial period. Later this trade route showed; a way to European explorers and traders and marked the corridors for future east-west travel.

The horse became the most important animal for trade; out of all the goods traded throughout the continent, the horse, spread by Indian tribes through Native American trade routes, is perhaps the most significant. The horse’s that spread, in Native American hands was so great; that it became the primary source of transportation. In the south, the Caddo trade centre became the major; entry point for the horse.

The reverse side of this coin depicts Native Americans and horses in profile with horses running in the background, representing the historical spread of the horse. These US commemorative coins issued by the United States of America; are considered the rare coins of the world as they were issued; in limited quantity. 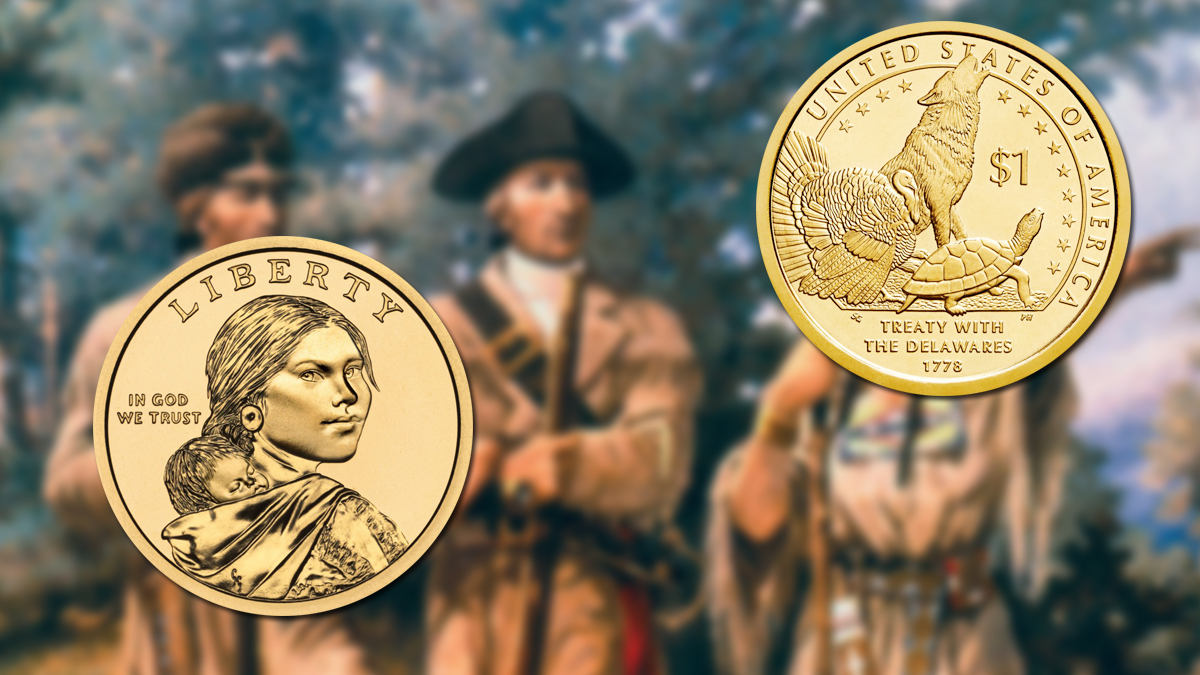 2013 Native American 1 Dollar coin was issued on Delaware Treaty of 1778. When the United States of America was fighting to become the first nation, they were also trying to make treaties with the Native American Tribe. In 1778 a Treaty with the Delaware Indians was signed and, it was the first treaty written and signed on both sides.

The United States of America created its constitution in 1789, specifying trade with the Native American tribe to treat equally to the foreign government. Some people debated the legal theory behind this relationship. Later, in 1832 Chief Justice John Marshall declares tribes to be dependent nations, not foreign nations. These made the Tribe of the Native Americans equal to the State government.

On September 17, 1778, the treaty of Delaware took place at Fort Pitt; this mutual defence treaty allowed the troops of America to pass through Delaware’s land to attack the British fort at Detroit, Michigan. This treaty is also known as the Delaware Nation’s sovereignty. The treaty also offered significant insight into the later process of incorporating tribes into the federal system.

This right to govern themselves by Delaware; gave them optioned to join other tribes in the Ohio region to form a state. This statehood opinion was never into action, and the first step is recognizing tribes as part of the U.S. confederation. Issuing US commemorative coins is one such step taken to get acquainted with the culture and history of the indigenous settlers of America.