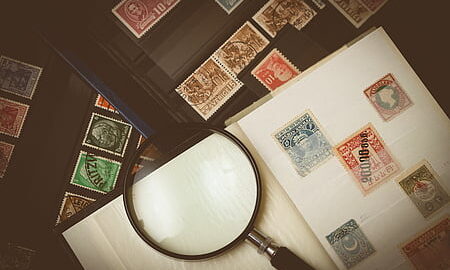 Do you know how the postage stamp came into existence? The revolutionary change came in 1840 when an Englishman came up with the idea of a stamp to simplify the postal system. This is how the first stamp came forth which was known as the Penny Black Stamp. The Penny Black stamp, hence, became the mother of the Modern Postal system and a new hobby of collecting stamps. Stamp collecting may seem a bit old-fashioned but rare stamps, however, are selling for hundreds and thousands of pounds. Hence, stamp collection is back in vogue in this world of smartphones and technology. Here is the list of Most Valuable Stamps of the World.

Why Collect Stamps? The usual reasons are personal enjoyment, personal gratification, and a sense of accomplishment. Through collecting, one can gain greater knowledge in history, geography, cultures, beliefs, and possibly a greater understanding of other languages. Stamp collecting began almost immediately after the issue of the first adhesive postage stamp. From the 1860s the hobby really caught on, especially among children and teenagers. The first stamp albums appeared in the 1860s when worldwide collecting was still a very small endeavor.

It took almost two and half decades to come up with a term for this new hobby. Coined in 1865 by Georges Herpin, ‘Philately’ was adopted as the proper term for the studying of stamps and stamp collecting. The word “Philately” is the English version of the French word “philatelie”, coined by Georges Herpin in 1864. He took the Greek root word “phil” or “philo”, meaning “an attraction or affinity for something”, and “ateleia”, meaning “exempt from duties and taxes” to form “philatelie”. Collecting world postage stamps is a wonderful hobby that reflects your interest. This hobby can be enjoyed by everyone, though many collectors have also been kings, queens, and presidents. This hobby can be as inexpensive or as expensive as one desires.  The costs can range from a few dollars to the millions of dollars required for complete collections of some countries! 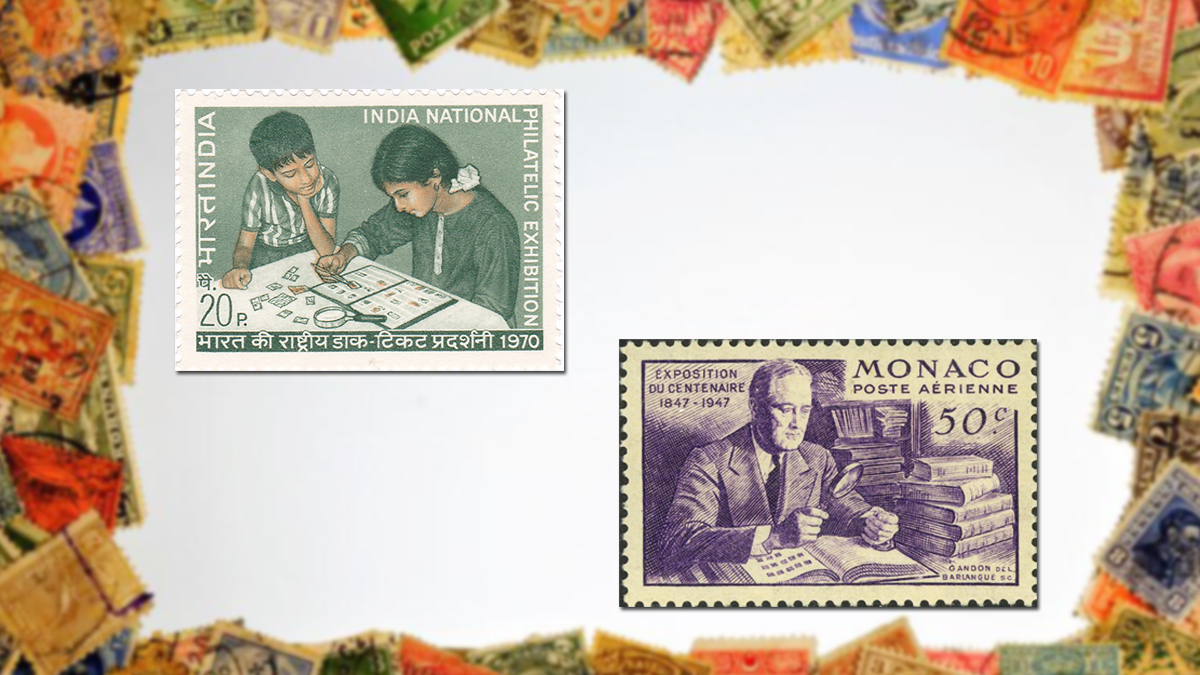 Stamp collecting as a hobby has developed throughout the years. It is not merely collecting random stamps but has become a more carefully planned purchase. Postage Stamp Collecting continues to grow on a worldwide scale.  World Stamp collecting not only enables one to learn about their own country’s history, culture, famous people, but it also enables them to learn more about the larger world around them.  Postage stamp collecting continues to be one of the best non-scholastic learning tools in existence. Philately has a definite role in this growing investor interest and with good reason.  Stamps have a very long-term proven track record of price appreciation and of product availability with enough market depth and worldwide interest. Though stamp collecting is not a new concept, stamp collecting for the purpose of returns and investment is fairly modern. Ever since nations began to regulate and standardize the post, there have been people collecting expensive stamps. These little pieces of paper have become the Most Valuable Stamps of the World.

What Makes a Stamp Valuable?

Typically, what makes the stamps the most valuable stamps of the world is determined by four distinct elements:

Assessing the centering is the first step in evaluating your stamps. Stamps with nearly equal margins are considered more visually appealing, and thus typically sell for more. The design should be balanced in relation to other parts of the stamp such as the margin and vignette.

The condition of your stamp is one of the most important factors when determining stamp collection value. Expert collectors understand that perforations missing, faded colors, paper flacks, and other imperfections greatly diminish stamp value. Stamps are generally graded on a scale such as Superb Fine Good. Anything below “good” isn’t worth acquiring for senior collectors; as with most collectibles, stamps’ values decrease depending on the number of tears, creases, faded designs, and other aesthetic issues that are present.

Stamp gum is the glue found on the backside of the stamp. The highest valued stamps have perfect gum that is still original, undamaged, and in the same state as when it left the post office. This is often referred to as “mint, never hinged.” Generally, the following conditions describe the grade of a stamp’s gum

Mint: Stamps with full, undamaged original gum, as sold by the post office.

Unused: Stamps whose original gum has been damaged, often through the use of stamp hinges.

Unused without gum: Stamps that have lost their original gum.

There are various factors that determine the rareness of a stamp, which often require a philatelist and expert opinion. Stamps that have errors in printing, content, and perforation are considered rare, as are those limited-issue stamps where only a small number exist.

Most Valuable Stamps of the World 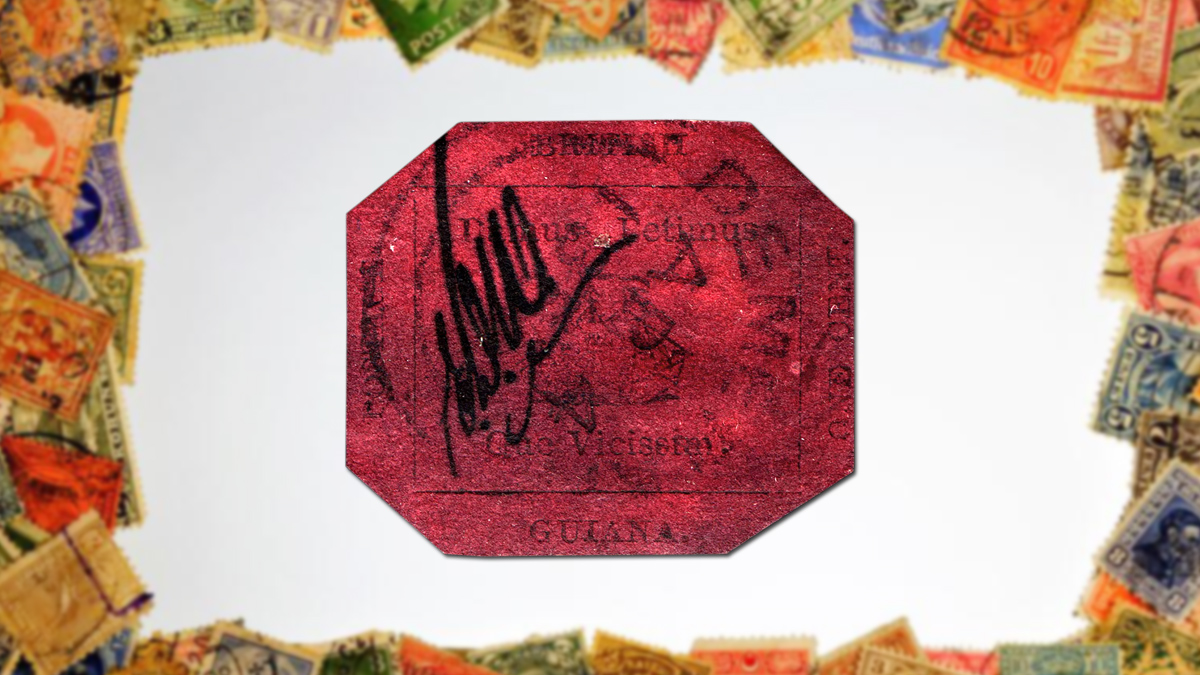 In the 21st century, the British Guiana one-cent Black on Magenta postage stamp is known by many stamp collectors and philatelists as the world’s rarest, most famous, and most valuable stamp. Firstly, there is only one left in the world which is exhibited in the Smithsonian Museum and secondly, it has a historical value. The story goes like this: At the time, all the colonies had to wait for stamps to arrive from the UK. The boat was delayed, and the postmaster created his own collection of stamps and carries his signature. The British Guiana 1c Magenta (1856), which has been described as “the Mona Lisa of the stamp world”, was bought for $8.3m (£6.2m) in the year 2021.

Most Valuable Stamps of the World: British Edition

1: The Penny Black was the world’s first adhesive postage stamp used in a public postal system. Issued by Great Britain on 1 May 1840, the stamp bears a portrait of Queen Victoria. With the issue of pre-paid postage stamps, the Postal System became less complex. Only two pieces of the early issue can be found now and these are regarded as real treasures. 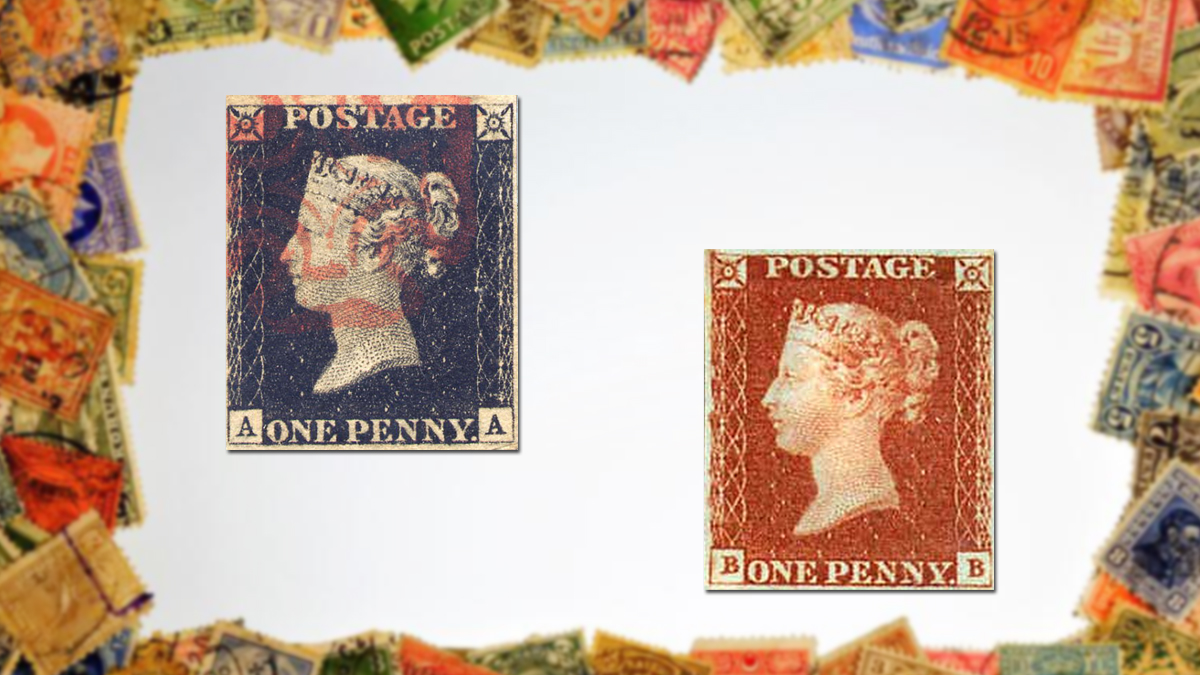 2: Penny Red succeeded penny Black Stamps and continued as the main type of postage stamp in the United Kingdom. The color was changed from black to red because of difficulty in seeing a cancellation mark on the Penny Black. These Stamps are really rare as there are only nine in the world. Stanley Gibbons has sold is a British Penny Red for £550,000.

Most Valuable Stamps of the World: American Edition

1: The 1cent Benjamin Franklin Z Grill is one of the most valuable stamps of America. The reason behind the rarity of this stamp is “Z Grill” embossing on it. A grill is an embossed pattern on the face of a stamp used to prevent the reuse of stamps. The US Postal Service used several different types of grills in the early days of the office as they experimented with the best methods to stop fraud. The Z grill was not widely used, but there are George Washington and Abraham Lincoln stamps that also feature the pattern. The Benjamin Franklin Z Grill is the rarest, with only two known surviving examples. This stamp was last sold at auction for $935,000 in 1998. 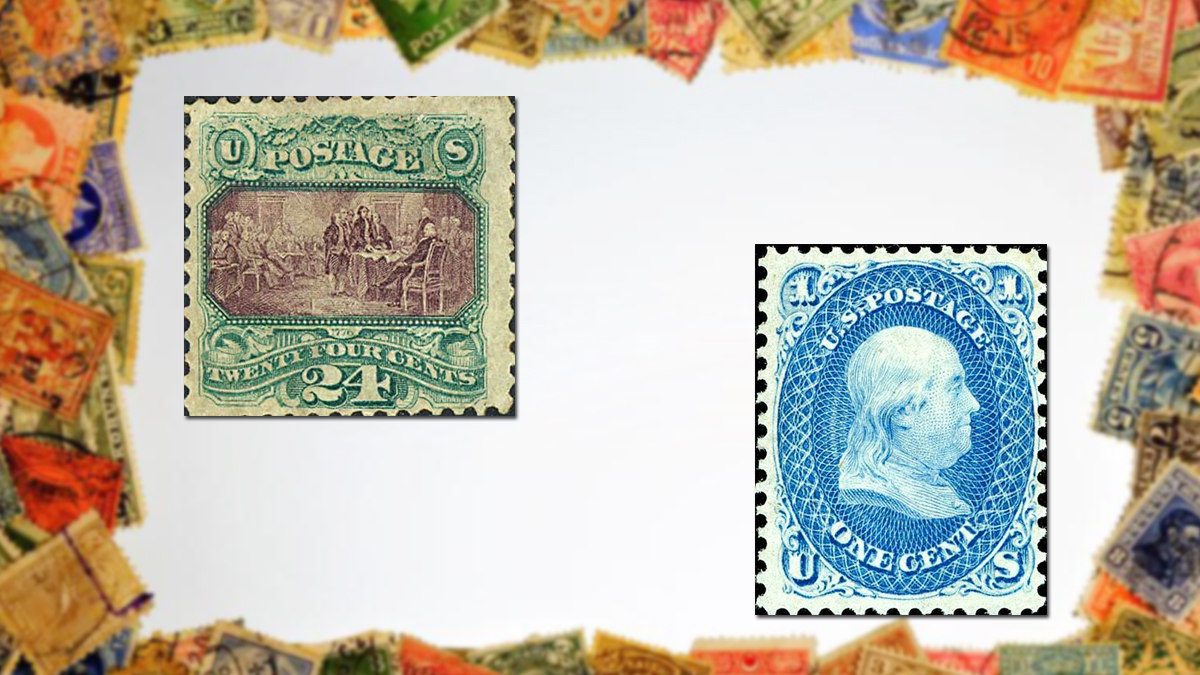 2: 24c Declaration of Independence is a rare example of a collector’s stamp that is highly sought after simply because it is a work of art unto itself. This stamp features a highly detailed, two-tone rendering of John Trumbull’s famous painting of the presentation of the Declaration of Independence to the Continental Congress. There are 42 individual figures depicted on this stamp, some so small they can only be seen with a magnifying glass. This impressive stamp commemorates the historic proclamation of independence of the United States and is worth $ 625,000.

Most Valuable Stamps of the World: Miscellaneous

1: Tama 6 Yo Stamp of Japan is one of the rarities of the orient world. The stamp is legendary in Japan and is called “Tama 6 yo”. It is a 6 SEN of the Cherry Blossom issue from 1875 in orange-brown color. Before this find, only 6 other copies were known. This Japanese stamp’s catalog value is 336,900 dollars and was sold by the Postiljonen Jubilee Auction for 124,635 dollars in Sweden. All the existing copies of this stamp are owned by great Japanese collectors. 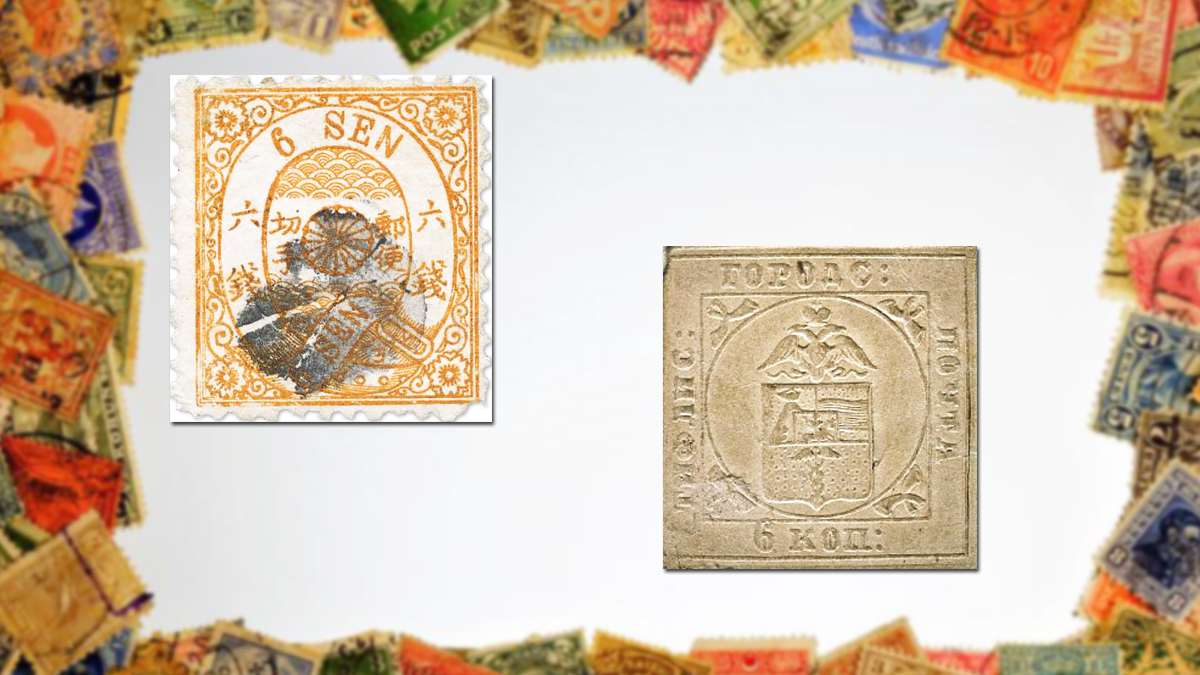 2) “The Tiflis Unica” is one of the oldest stamps of its kind. Printed in the year 1857, the Tiflis Unica was issued in the Russian Empire (in modern Georgia) for the city post in Tiflis (now Tbilisi) and Kojori in 1857. These stamps, today, are known as Tiflis Unica Stamps. And are one of the rare and, hence, one of the most valuable stamps of the world. There are currently only five known surviving stamps. Russian collectors are willing to pay a lot of money for these rare stamps. One of these unique stamps was sold at the David Feldman auction for € 480,000 i.e. $700,000 in the year 2008.

The most important factor that determines the value of a stamp (other than rarity) is its condition. It is absolutely imperative to keep a stamp clean, neat, and crease-free. Every senior collector would advise that having the right kind of accessories is extremely important when you are pursuing your hobby so passionately. You wouldn’t want to regret things that could go wrong with your collection in the future. Many a time, precious stamps that you collect are lost somewhere. Some of them also get affected or lose their freshness due to moisture, dust, and other such environmental factors. If you don’t handle stamps with care, they could easily get torn or folded. If you are a true collector at heart then you should buy lighthouse stamp collecting supplies.