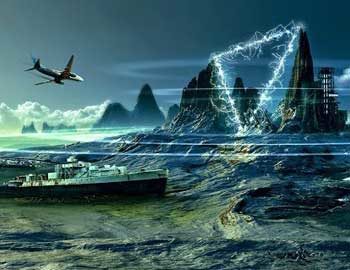 Unknown, unheard and unsolved, the mysteries of the world are one most fascinating enigmas for mankind. These events do not have any scientific explanations and are a wide string of mysterious webs with complex and untraceable origins since aeons.  People who have witnessed these phenomena believed in it, but for the rest of the world, these are just fancy stories told to entertain local tourists. We can only experience these events, a mere explanation won’t justify them. Many countries across the world have acknowledged these mysteries of the world in their own fancy curious ways. They have illustrated these mysteries on stamps and coins to allure the interest of the people towards these unexplained happenings.

These marvels series is divided into a set of sixteen classified events across the different countries. It is divided into two parts, part one covers the Scottish mystery, fate of Amazon, lost island, etc.

So, without fail, let us embark on the adventure of the unknown through the help of philately and numismatics. Where you all will come across many questions! Yet, it will tease our explorative and curious nature and leave us wanting to know more about it.

A freshwater loch in the Scottish Highlands is lazily welcoming the first ray of light, suddenly there is the sound of splashing water and you can see a big shadow like animal swimming in the lake. This shadow is non-other than the endearing resident monster of Loch Ness, the adorable Nessie!

The lore of this Scottish creature is one of the most entertaining stories of the modern era. Nessie appeared on the souvenir sheet (image a) of Maldives Island, they issued this stamp in 1993. This sheet represented Nessie in a plesiosaur form, an ocean reptile during the age of the dinosaur.

This lovable creature of Loch Ness is so famous that royal mint has also illustrated it on a nickel plated steel 10 pence coin (image c). This coin was issued in 2018 and featured Nessie on its reverse side. This coin is the part of 26 designs featuring and celebrating British life.

This beautiful silver coin seen in image b depicts Nessie in a very ferocious form. This stunning 1000 franc Burkina Faso was issued in 2017. It was the third coin released in the mythical creature series.

The lore of the resident monster of Loch Ness became famous in 1933 when a couple passing by the lake saw a creature playing along with the shore. Many searching parties explored the area around the lake, but the evidence of such a creature’s existence was never found. Till date, it’s a mystery if such a creature exists in Loch Ness or it was just an illusion, we will never know.

The second story of this adventure is The Ghosts in old castles:

The stories of Ghost are quite common among the different societies and cultures across the globe. These stories are told to entertain people during a cold night in the front of the bonfire with an added benefit of roasted marshmallows.

Amongst all these tattle tales and the rumours of the ghost of London tower, the story of Anne Boleyn’s ghost is the most enduring. It’s also the most travelled ghost in the history of ghost lore’s, due to its supposed appearance in various old castles across the United Kingdom.

The mysteries of the world series of Maldives post issued a souvenir sheet (image d) illustrating the lady of London tower in 1993. The London tower is the place where Anne Boleyn, the Second wife of King Henry VII of England was executed for treason.  It is rumoured that she is seen in many places with different attires like a blue dress or wearing loin cloths and staring down from a window, and sometimes strolling in a garden and so on.

The stamp in image e that Canada Post issued in 2014 brings alive the Ghost bride of the Banff Spring Hotel. This stamp depicts the unnerving image of women staring straight at you, it is said that this bride Ghost died on her wedding day. The Canada Post has issued a series of the stamp depicting various haunting lore from the different place in Canada. This country is a fan of haunting stories and mysteries; it’s like a popular culture there. 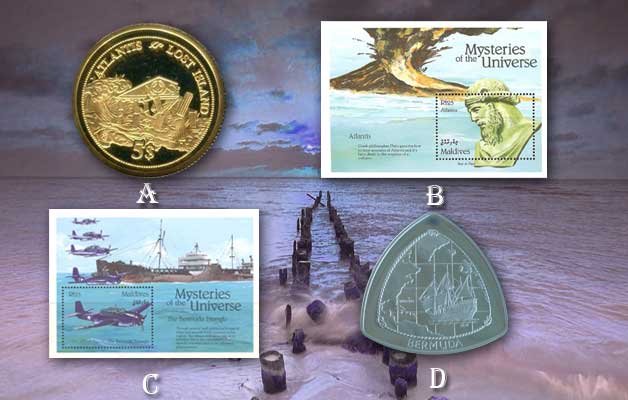 The next mysteries of this grand journey are;

The lost island and the great triangle:

It’s a captivating thought, that is Atlantis real or it is an imagination of Plato, there are so many questions about Atlantis without any answers. This lost Island of Atlantis is the most debated and interesting subject discussed between the historian and history fanatics. The existence of Atlantis is one of the biggest mysteries of the world.

This island is beautifully depicted in the gold 5 dollars (image A) of Fiji in 2006. This coin was the part of Famous landscape formation series. The obverse of this coin depicts legend ‘Atlantis lost Island’ with a broken temple in the centre.

The souvenir sheet (image b) of Maldives depicts this lost Island of Atlantis with a stamp depicting the bust of Plato.

The image c depicts yet another great unsolved mystery of the Ocean, the Bermuda triangle! This stamp was issued by the Maldives Post. It is the part of the Mysteries of Universe series issued in 1993. This famous region is suited in the Atlantic Ocean and is famous for the loss of many ships and planes in this area.

The accidents that occur here are unexplained and no one knows about the fate of the lost planes and ships.  In 1998, Cooks Island issued a triangle shaped sterling silver three dollar coin (image d), and in 1996 a gold 60 dollar triangle shape coins that depicted the Bermuda mystery.

The end of this long analysis is coming and with it comes the second last mysteries of this fabulous journey;

The disaster of Hindenburg and Ghost ship Marie Celeste:

On May 6, 1937, the German Zeppelin Hindenburg exploded into flames and crashed while approaching its mooring tower in Lakehurst, New Jersey. There are many plausible causes of these disasters, but the real reason for this tragedy is still unknown. This tragedy took many lives and remains as one of the mysterious disasters till today.

The Maldives Post issued a souvenir sheet (image a) in 1992 depicting this tragedy also known as the explosion of the Hindenburg. The second stamp (image b) depicted by Saint Vincent and the Grenadines in 2000 depicted the flames of the airship. This airship was depicted on the airmail stamps of Germany, the gold foil stamp of Chad in 1983 and also of Greece, Finland, Italy, etc.  The tragedy of this airship is quite known and unanswered till today.

The second mysteries of the World in this image is of Ghost Ship called Marie Celeste also known as Amazon, it is depicted on the sheet stamp of Maldives (image c). This ship was found adrift in the Atlantis Ocean without its crew.

This ship was also depicted on the gold coin (Image d) issued by Canada mint in 2016. It was the most famous wooden sailing ship, one of the first vessels built at Spencer Island. Yet, it is known as the Mary Celeste the inexplicable mysteries of the high sea. When this ship was found lonely in the wide sea without any crew member on board, the circumstance in which all it’s happened in unknown. None of the crew members was reported or found again, their fate remained is unknown to the world until today. 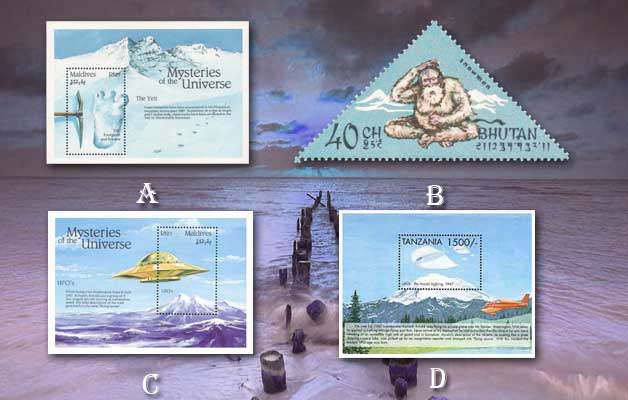 At the end of this adventurous journey, the last mysteries are;

The being in the Himalayan Mountains and the unknown spaceships:

One of the greatest mysteries of the Himalayan Mountains is the hairy white hominid inhabitant called Yeti. It is claimed by many mountaineers and trekkers that they have seen Yeti. Many stories around the world talk about a long-haired being roaming in the forest hiding for the modern men, adds more spice to its mystery.

Maldives post has issued a souvenir stamp (image a) depicting the footprint of a Yeti on snow. This stamp is a part of the mysteries of the universe series. The second triangular stamp (image b) was issued by the Bhutan Post issued in 1966.

There are many songs of yeti describing it as a lonely figure hiding from the modern world. This song also warns Yeti to hide and run and be a mystery. It good that this song tells yeti to hide because let’s face it, what will this world be without mysteries like the Yeti’s!

The last mystery is the greatest of all, one which is a dicey argument.  The sighting of the UFO across the globe, the mystery of UFO is like Ghost stories hard to believe, but fascinating to hear.

UFO’s have appeared on many countries stamps like the souvenir sheet (image c) of the Maldives, issued in 1993. This stamp is based on the story of Kenneth Arnold; he saw nine discs shaped aircraft moving at tremendous speed in 1947 over Washington State. The second stamp (image d) was issued by Tanzania Post in 1999 based on the same story. Maldives Post also issued a sheet in 1992 based on the report of four army officers flying near Columbus, Ohio who collided with Unknown Vehicle.

The mysteries of the world are one of the fascinating subjects for study, debate and research. These are the never-ending topics with many possibilities. We never knew where we will reach and what waits for us there. These incidences are famous because they are not seen by many and do not have any proof of its existence. Some of these incidents have taken place without any proper explanation.

These mysteries are like the games of assumptions. It’s like a game of dice we never know what new facts or theory we will read about these different mysterious occurrences. These mysteries are lore do not have morals at the end because there is no end to this stories.  Maybe these stories are not yet complete there more things to discover, we may never know.