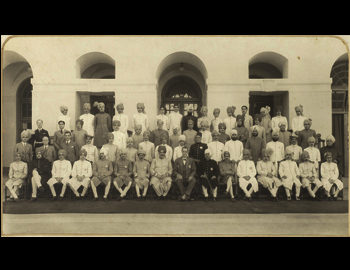 In legal terms, a princely state was defined as ‘Any territory, whether described as a state, an estate, a jagir or otherwise, belonging to or under the suzerainty of a ruler who is under the suzerainty of His Majesty and not being part of British India (under direct colonial administration)’ – Section 31 (I) of the Government of India Act, 1935. This elastic definition applied to entities of diverse size and status, the number of which varied according to different interpretations. Most of the official documents mention 562 princely states, but other governmental sources numbered 600 or more. Out of these 60 of them issued their own Princely state coins. Let’s continue from the last part and look into the ones that did:

1. Coins of Bundelkhand: The mint of Bundelkhand was located at Orchha and was later shifted to Tehri. Its Indian princely state coins were known as Gaja Shahi because of the gaja or mace mint-mark and depicted the legend or couplets of Shah Alam.

2. Coins of Bundi: Ram Singh was the first ruler of Bundi to strike his own name on coins. ‘Victoria Queen’ was struck on obverse and ‘Ram Singh, Lord of Bundi, worshipper of Rangesa’ on reverse, all in devnagri script. Similar coins were also struck in the name of Emperor Edward VII.

3. Coins of Cambay: The paisa coins depicted the words ‘Sri sal’ or ‘sava’ in the Gujarati character struck incused with a blank reverse. The other types have ‘Shah’ in persian script on reverse. Another type has the same reverse with obverse legend ‘Sri Khanbhat bandar san 1948 ni sal’ (blessed port of Cambay, year of sambat, 1948= 1891 A.D) in Gujarati. These princely state coins were thick, dumpy pieces or irregular form. A further variety is of the modern circular thin type reading ‘Paisa san 1963’ in Gujarati on the reverse.

4. Coins of Chamba: Charhat Singh, Lakar Singh, Shri Singh and Sham Singh issued coins in copper. Most of them had the trishul mint mark with Nagari legend. According to the Gazetter of Chamba State, the copper coin was called chakli, five of which made an anna. It was in use from all likelihood from ancient times. On it Raja Sahil Varma (920-940 A.D) struck a pierced ear, a symbol of a yogi in honor of Charpatnath (a well-known yogi at that time). Ancient coins were rare in the hills, and possibly this may have had some bearing upon the system of paying revenue in kind. The later Rajas added Vishnu-pad or feet of Vishnu on their coins. There was no traditional silver or gold coinage.

5. Coins of Chhatarpur: The Raja shahi, as the Chhatarpur coins was called, were of a very distinctive type and easily recognized, for in the center of the field between the words  ‘baad’ and ‘laam’ (in Persian Script) a flower with a long stalk is exhibited which appears to represent sunflower. The legend on the reverse is the usual formula with the mint Chhatarpur (in Persian Script). Coins struck in circa 1816-1882 A.D. bore the frozen date AH112 (sometimes blundered).

6. Coins of Chhota Udaipur: Copper paisa coins we issued by Guman Singhji, Jit Singhji and Moti Singhji. They had Gujarati characters with denomination mentioned in the centre of a lined circle usually followed with a scimitar pointing left with the name of ruling chief. The reverse had the date with ‘Savasthan Chhota Udepor’ in Gujarati.

7. Coins of Cochin: The only coins ever minted in the state were single and double puttuns. The obverse had object like letter J lying on its side with twelve dots (in three rows of four) below along with sun and moon and two or three additional dots above. The reverse had arrangement of lines and dots, the central part of which perhaps represented a Sankha (Conch Shell).

8. Coins of Coorg: The coins of Coorg bear no inscription or any date. According to Krause Mishler, silver fanam coins minted by Chikkvirappa Wodeyar (1736-66) bear the devnagari word ‘Ka’ on the obverse and Vira Raja on the reverse. Stylized lions with a crescent, on the obverse and seated crocodile on the reverse are observed in the gold fanams.

9. Coins of Datia: Two distinct types of coins are reputed to have been struck by this state, one of them being called the ‘Raja Shahi’ and the other the ‘Gaja Shahi’ which imitate the coins of Orchha. They were issued in various sizes from the rupee to two annas.

10. Coins of Dewas: This state never had a mint but made use of the currency struck at other neighboring towns. Copper paisa, however, are known to have been struck locally at Allote in Dewas (Senior Branch). The contract for their manufacture was given to local bankers. In 1888 copper coins were struck at Calcutta by the Indian Government. The issue for each branch consisted of the half-pice, one-twelfth anna and quarter anna. 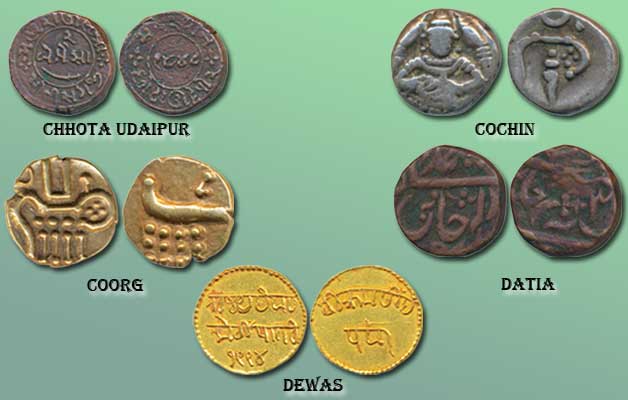 11. Coins of Dhar: The earliest coins are of Anand Rao III which exhibit the figure of Hanuman, the monkey god, and bear a Muhammadan date in Hindu numerals. A special coin with the addition of the words `Dhar State’ was struck at the Calcutta Mint. In 1895 the British rupee was made legal tender throughout the State.

12. Coins of Dholpur: The dholpur mint was opened in 1804 by Ranas of Gohads and the coins struck there are known as ‘tamancha’ on account of the tamancha or pistol shown on them which was also the mark of the State. Silver coins and half-rupees only have been struck at this mint, which ceased its operations in 1857.

13. Coins of Dungarpur: Uday Singh issued copper paisa (half, quarter and full) and gold mohurs during his reign. ‘Sarkar Dungarpur’ or ‘Rajha Dungarpur’in devnagari was found on the obverse with sword and ‘jhar’ on the reverse. Lakshman Singh too issued princely state coins in gold with a similar layout. The World War II coins portray coat of arms on the obverse with ‘Rajya Dungarpur’ denomination and date in Vikram Samvat era, all in devnagari, on the reverse.

14. Coins of Gwalior: Coins were minted in the state of Gwalior up till India gained Independence. Each mint, and there were probably more than twenty in all, maintained its own style and types. Most of them are undated or issued over long periods of with frozen dates, in order to discourage nefarious practice of devaluing coins of older dates while the ruler’s initial changed.

More on Princely State coins coming up very soon. Can’t wait until then? Visit our history section for detailed information on the history of Indian Princely States.