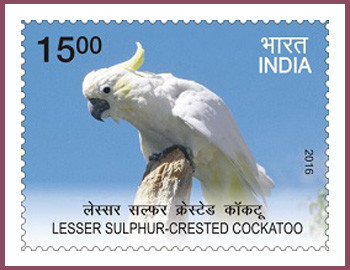 Continuing with where we left last year, here is another post in the series of stamps of India featuring birds on them. Just before the year ended in 2016, some splendid stamps were released by India post depicting colourful birds on 5th December 2016. 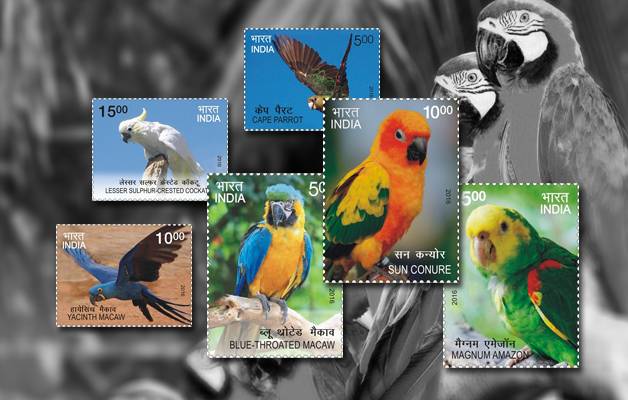 The Lesser Sulphur-Crested cockatoo is a smaller version of the Sulphur-Crested Cockatoo from a different species. It can be easily identified by its white feathers, a yellow crest and a yellow patch under the wings, black bill and feet. Some have an orange or yellow patch on their cheeks. They are mostly found in the islands of Indonesia and live at the edges of tropical forests. These lovely birds are popularly kept as a pet as they are intelligent, learn tricks easily, can imitate speech and are affectionate. They make very loud noises and need a lot of attention.  One of the latest stamps of India issued on 5th December 2016 features this beautiful bird. Click here to know more about the stamp.

The hyacinth macaw is generally found in the eastern South America. They are longer than other parrots and is also the largest flying parrot species. These birds are being trapped on a large scale for the pet industry which is reducing its population in the wild. They are hence considered endangered by many organisations. They have strong beaks as they mostly feed on nuts, from acuri and bocaiuva palms, coconuts, brazil nut pods, and macadamia nuts. Charles Darwin called it a “splendid bird” for its ability to feed on these hard nuts. 46 of 145 species are at a serious risk of global extinction which has occurred due to various reasons like hunting and reduced habitat. Creations of pastures for cattle, clearing land for colonisation, cattle ranching etc have led to the loss of habitat. Stamps of India featuring this lovely bird of the denomination 10 rupees were issued in December last year. Click here to know more about the stamp.

Cape parrots majorly live in temperate forests of South Africa. They have a short tail, a very large beak used to crack all sorts of hard nuts and fruit kernels etc. Females have an orange frontal patch on the forehead. Younger birds also have a larger orange – pink patch but not the red patch on shoulders and legs which are found in adults. These lovely birds are also losing their numbers. But efforts are being taken to conserve the existing ones. These parrots can be easily identified by their slow, ‘rowing’ flight and unique calls. Out of all the stamps of India that were issued on 5th December last year, one of them features this colourful parrot.

The yellow-headed amazon is an endangered amazon parrot of Mexico and northern Central America. It has a short tail, a green body, a yellow head, rounded wings and a square tail. They live in mangrove forests or forests near rivers or other water bodies. The base of the tail also has a red hidden patch. Yellowish tips are found on the outer wings. Magnum is bred for more yellow and is costly as a pet. Some “extreme” Magnas have a heavier colour on the chest and a less bluish tint to the green plumage. They fly silently unlike most other parrots. They are also considered to be endangered species. If you like collecting stamps of India featuring birds on them then you should have this one in your collection.

The blue-throated macaws are a cultural heritage of Bolivia which are also at the verge of extinction due to illegal trade and poaching. Males are slightly larger than females with turquoise-blue upperparts and bright yellow underparts. The adults have yellow irises while younger birds have brown irises. Various efforts are being taken by different organisations across the globe to save this wonderful species. One of the stamps of India that were issued on 5th December last year features this amazing bird!

The sun conure is a medium-sized bright parrot found majorly in South America. The adult male and female both have a golden-yellow plumage and orange-flushed underparts and face. They are social birds who like living in flocks. They feed on fruits, flowers, berries, blossoms, seeds, nuts and insects. They can live up to 30 years and are currently threatened by loss of habitat and trapping for plumage or the pet trade. Younger sun parakeets have a green plumage and look like sulphur-breasted parakeets. They get the distinct colour as they grow up. Click here to take a look at one of the stamps of India that were issued on 5th December last year featuring this wonderful bird!

This is the third post in this blog series.

Read the earlier parts of the blog here:

Endangered Birds on Stamps of India

May all your dreams take flight this year and turn into reality, just like these lovely birds!