Another year has gone by and New Year Celebrations are just around the corner. It has been a wonderful journey so far and Team Mintage World is overwhelmed with the kind of response that we have been receiving throughout the year. Today, we thought of giving you a small recap of all the exciting happenings of 2016 at Mintage World, in a nutshell. All of these little milestones have become an integral part of our treasure chest filled with memories! 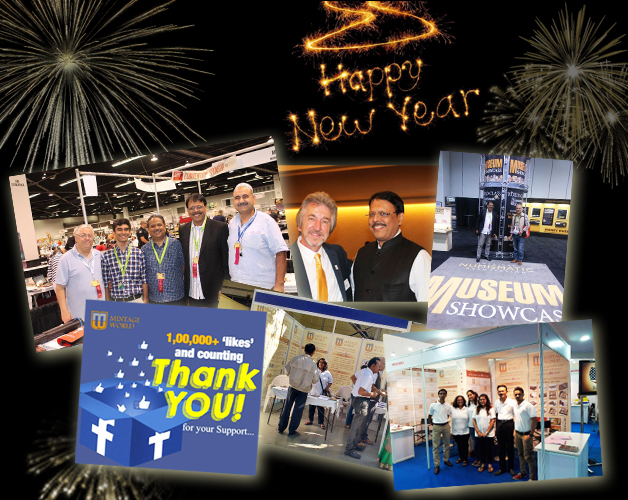 Ours is the only online platform in the world which shares information about coins, notes and stamps all under the same roof. Our team of researchers and experts keep compiling data and updating an extensive info-base of coins, notes and stamps almost on a weekly basis. Today our coins section has detailed information about more than 39, 000 coins. All the data is well categorised based on eras, dynasties etc. Our powerful search tool helps users to search for coin information based on denominations, rulers etc. Our stamps section has well-categorised information about more than 4800 stamps and our banknotes section has descriptive information about over 1300 notes. Apart from that, our history section has covered various important topics in an easily downloadable pdf format. Then there is the news section which shares regular updates about numismatics, philately and notaphily. An Ideal platform for collectors, researchers, students and everyone else!

Mintage World was officially launched on 23rd April 2016 along with the opening day of the 25th Shukla Day Coin and Philately fair at World Trade Centre, Mumbai. The honourable Chief minister of Maharashtra, Mr. Devendra Fadnavis graced the event and encouraged Team Mintage World for educating the world about Indian culture and history through the study of coins, notes and stamps. Founder of Mintage World and MD of Ultra Media and Entertainment, Mr. Sushilkumar Agarwal shared his vision about this novel initiative. The launch event was a grand success which was covered across various media networks.

Since then, there has been no looking back. We have been trotting across the country, participating in and sponsoring various events in an effort to reach out to more and more people. From 15th to 17th July we attended the Nanya Darshini Coin Fest in Bengaluru. Then we co-sponsored the 8th Annual Ahmedabad Coins & Currency Fair 2016, Ahmedabad from 5th to 7th August 2016. We did not restrict ourselves to India but made our presence felt at the World’s Fair of Money, California which began on 9th August. In September we participated in the Mumbai Coin Society Show from 23rd to 25th. November was a busy month for us with two shows, Indore Numismatic Fair 2016 (4th to 6th November) and Virasat 2016, Gwalior (7th to 9th November). In December as well we had two shows to attend, one was the International Society of Rare Items, Pune (9th to 11th December). We also took an innovative route for reaching out to the younger audience and co-sponsored a college event called Dimensions in Mumbai from 22nd to 23rd December.

Apart from the regular weekly blog posts touching upon various interesting subjects and current news, we also introduced a new series of videos titled as “Rusted Postbox”. The series throws light on some of the most important historical events and lives of personalities through the study of coins, notes and stamps. We also introduced a video series called “Hidden Treasures” that talks about the old coins, notes and stamps that were sold at very high prices at different auctions.

Then we introduced the shopping section with one-of-a-kind gifting solutions. You can buy beautiful photo frames and greeting cards along with an Indian banknote that would feature a personalised date like your anniversary date, birth date etc as the serial number. You can also select a picture of your choice and get them printed in 3D, making it the perfect memorabilia for special occasions.

Mintage World is present across multiple social media platforms lie Facebook, twitter, pinterest, instagram and google plus. The response has been amazing and within less than a year, we have managed to touch base with thousands of followers. Interaction levels on all the pages has been steadily increasing and we love responding to each and everyone. Today, our facebook page has grown from 0 to 1 lakh followers!

What started off as a modest beginning, Mintage World has gone ahead to keep visitors excited. Slowly but steadily, viewership has been increasing. Within less than a year, Mintage World already has more than 4000 members and has no intention to stop at that.

It has been a great year and we are looking forward to your continuous support not only in 2017 but also for the following years to come!

Wishing you and your dear ones a very happy new year!