‘Shrusti Devo Shilpam, TTasya Pratikruti Manushya Shilpam’, it means ‘Nature is the art of god and human art is just a gist and imagination of it’. Therefore, the art developed by the men is influenced and copied from the nature. Indian art and architecture has beautiful and magnificent examples of this brilliant influence. These monuments are the insignia of Indian culture and tradition. There are so many of such splendid structures on this land, yet the best chosen among them are renowned monuments known all over the world as the “seven wonders of India”. These massive architectural miracles have ornamented this land with its splendid beauty.

Dazzling, elegant, massive and imposing there are not enough words to describe the seven wonders of India, they hold the torch to the architectural brilliance of the bygone era. Located in the different parts of India, they connect the diversity of this vibrant culture within one united heritage. The Times of India selected these spectacular structures from/via a popular voting poll. The winners were:  Gomateshwara, Harmandir Sahib (Golden Temple), Taj Mahal, Hampi, Konark Sun Temple, Nalanda and Khajuraho.

Some of these wonders are located in small towns and are not known to people all around the world. So let’s commence on the journey to understand these monuments that have wooed many people with their charm. 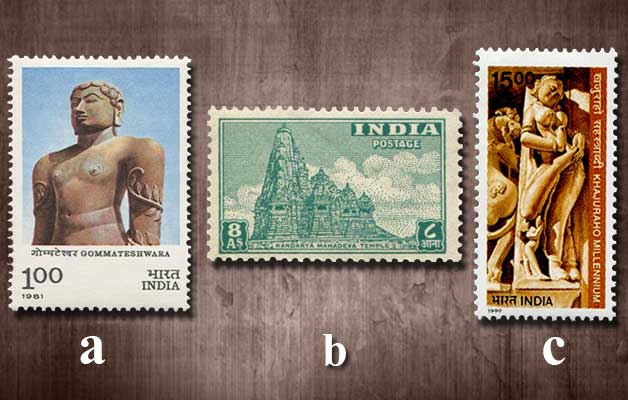 Gomateshwara, the Bhahubali of Sravana

One of the largest free-standing statues in the world, this 58 feet tall monolithic monument of Gomateshwara (image a) is located in the small town of Shravanabelagola overlooking the hill. This statue is dedicated to the most revered Jain god Bhahubali-one with the strong arms and his prolong meditation known as Kayotsarga.

This marvels wonder was constructed under the authority of Ganga dynasties minister and commander Chavundaraya in 983 CE. There are the group of five statues dedicated to different Thirthankars of Jainism in the surrounding areas of Sravana. India Post has illustrated the serene and peace-inspiring image of Lord Gomateshwara on a commemorative stamp issued in 1981.

The magnificent Nagara style temples of Khajuraho were constructed under the authority of Chandela dynasty. In total 85 temples were built out of which only 25 stand in various stages of restoration and conservation. Khajuraho group of temples are one of the largest sets of Hindu and Jain temples well known for their mesmerising sculpture and architecture. Kandariya Mahadeva (image b) is one of the famous temple, it comprises of eighty-four shikharas built 116 feet from the ground level. This architectural miracle of Khajuraho was declared one of India’s UNESCO World Heritage Sites.

In 1999, India Post issued a stamp depicting a sculpture of a woman writing a letter (image c). There was also a definitive stamp illustrates the famous Kandariya Mahadeva Temple issued in 1949.

Insignia of bravery, tradition and patriotism is Sri Harmandir Sahib- the Golden Temple. It is a centre of Sikhs community’s faith, illustrated with gold and water this adobe of the god was built in 1588. The fifth Guru Arjan Deva got the foundation laid by this temple by Hazart Main Mir, a Sufi Muslim saint of Lahore. 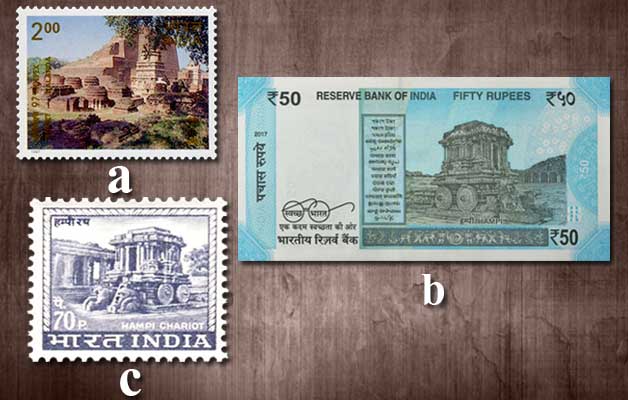 Nalanda, the temple of knowledge

The greatest learning centre of its time, Nalanda housed many intellectuals and scholars of ancient India. It was the centre of learning in India from 5th to 12th century CE and received the royal patronage of many kings and dynasties. It offered various subjects and many students from all over Asia and Europe came for advanced studies in Nalanda. This ancient university marked its place in seven wonders of India due to its brilliant history.

Nalanda University (image a) was faced with the terror of invasion when the armies of Mamluk dynasty of the Delhi Sultanate under Baktiyar Khiliji destroyed it. In 1997, India Post issued a commemorative stamp to herald and promote the great cultural heritage of India.

Hampi, the city of the Kings

The architectural miracle of the medieval India, it was one of the prosperous cities in the world around 1324 to 1565 CE. Hampi (image b) was the capital of the Vijaynagar Empire and is known for its stunning Hindu temple and monuments. This site is undertaken by UNESCO as World Heritage site. The great epics of India like Ramayana also talks about this city as the capital of kingdom Kiskinda. 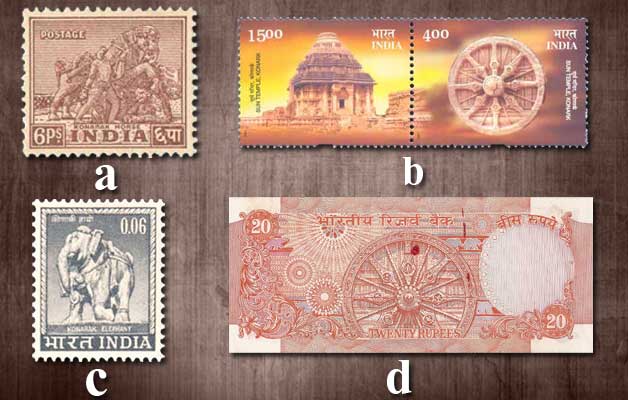 Konark Temple, the sun temple of the east

Adoring the eastern shores of India stands a sanctum of lord Surya, the sun temple of Konark . This temple is also known as the Black Pagoda representing all the stages of the sun. Konark was built by the King Narasimhadeva I of the Ganga dynasty in the 13th century.  To commemorate its ancient structure India Post issued a stamp depicting the Konark elephant (image b) and horse (image a).

Tajmahal, the symbol of eternal love

The ivory-white mausoleum of love overlooking the city of Agar near the bank of River Yamuna does not need any introduction. Tajmahal is the symbol of Mughal Emperor Shah Jahan love for his beloved wife Mumtaz Mahal. He built this monument after her demise around 1653 CE. It is said that Tajmahal (image b) was constructed by 20,000 craftsmen. This stunning and extinguish structure is not only in Seven wonders of India but also the part of the Seven Wonders of the World!

These Seven Wonders of India are not just mere structures, they are the memories of the bygone eras of prosperous, philosophical and strong India. These monuments represent the advance knowledge known to Indians about the science of architecture during that period. The thought, skill and hard work put into the construction of every part and pieces of these massive structures are unique. Some of these structures have such design and pattern on its walls that during monsoon when rain falls, the water follows through the carved designs on the wall resulting into some beautiful patterns. Every brick and column of these seven monuments is an example of the intrinsic workmanship of the artists of that time. The sculptures on the wall represent everything, from the lives of the king to that of a normal man. Every aspect of human life is captured and narrated on these huge man-made marvels. Looking at these marvels one can definitely say that architecture belongs to the cultures, and not to the civilizations!