“Why, sometimes I’ve believed as many as six impossible things before breakfast…”

We all grew up reading about the wondrous adventures of Alice. The tale plays with logic, giving the story lasting popularity with adults as well as with children. It won’t be an exaggeration to say, Alice actually heralded our childhood journey through the fantasy world. The lack of logic in the story is a nice contrast to our world that is too full of cold logic.

Alice’s Adventures in Wonderland, popularly known as Alice in Wonderland, is an 1865 novel written by English author Charles Lutwidge Dodgson under the pseudonym Lewis Carroll. It’s a story of a girl named Alice who falls through a rabbit hole into a fantasy world populated by peculiar, anthropomorphic creatures. The books’ narrative course and structure, characters and imagery have been enormously influential in both popular culture and literature, especially in the fantasy genre.

The book has inspired numerous film and television adaptations. Not just that, Alice and her “friends and foes” from the underground have been a vibrant subject of design on philatelic issues too! In 2015, Royal Mail launched ten new stamps to celebrate the 150th anniversary of the publication of Lewis Carroll’s classic book Alice’s Adventures in Wonderland. Let’s have a look at them! 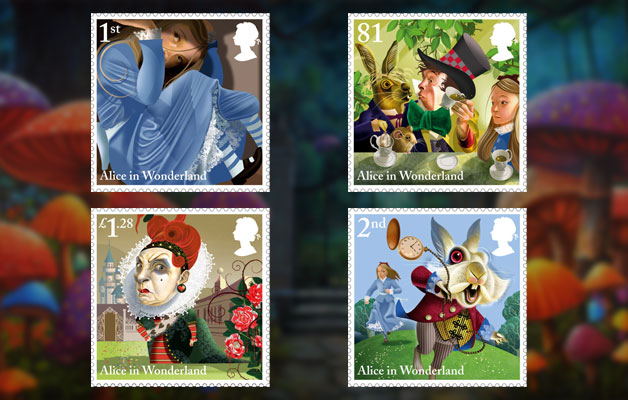 Depicted in the 1st class stamp beside is the White Rabbit’s House. The house has two floors and the bedroom is upstairs. The front door has a sign with “W. Rabbit” engraved on it. Inside, Alice eats a growth cake and ends up growing to giant size, with her arms and feet poking out the windows and also the doors. Terrified of the “monster” that has now taken over his house, the White Rabbit asks Dodo, who is passing through, for assistance. Dodo decides the best solution is to start a fire and smoke the monster out of the house, using the White Rabbit’s furniture as kindling. Reaching for the carrots in the White Rabbit’s garden, Alice manages to shrink herself back down and escapes while Dodo keeps trying to get the fire going even with the monster problem being solved.

“Someone’s head is going to roll for this!”

Depicted in the £1.28 stamp beside is the Queen of Hearts, the primary antagonist of the series. She is a foul-tempered monarch whom Carroll himself describes as “a blind fury”, and who is quick to give death sentences at the slightest offence. One of her most famous lines she states often is “Off with their heads!” The Queen is referred to as a card from a pack of playing cards by Alice, yet somehow she is able to talk and is the ruler of the lands in the story, alongside her tiny husband, the King of Hearts.

“Alice: How long is forever?

Depicted in this 2nd class stamp beside is the White Rabbit. He appears at the very beginning of the book, in chapter one, wearing a waistcoat, and muttering “Oh dear! Oh dear! I shall be too late!” Alice follows him down the rabbit hole into Wonderland. Alice encounters him again when he mistakes her for his housemaid Mary Ann and she becomes trapped in his house after growing too large. The Rabbit shows up again in the last few chapters, as a herald-like servant of the King and Queen of Hearts.

The Mad Tea party is an important scene, as the logic/illogic of the March Hare, the Hatter, and the Dormouse reveals some of the peculiarities of language. All are indeed mad, except (perhaps) Alice and the sleepy Dormouse (who is only mad when he is awake). The absence of time means that the Mad Tea-Party is trapped in a space without time. The world isn’t turning, hands aren’t moving around the clock, and the only “rotating” exists around the tea-party table. This 81 pence stamp depicts the “Mad Tea Party” where everybody is mad and it’s “always tea time!” 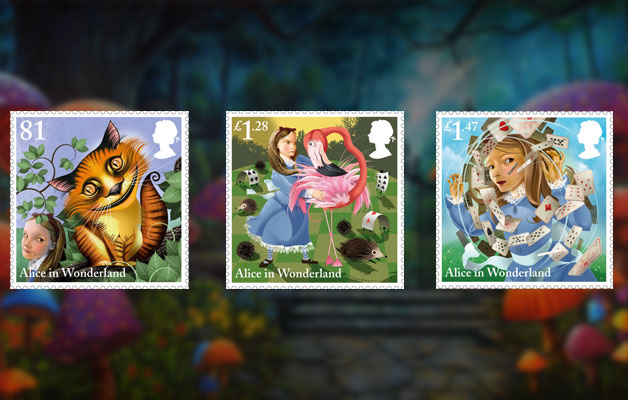 “I’m not crazy. My reality is just different than yours”

Alice has a difficult time adjusting to the curious version of croquet played by the Queen. The croquet ground is ridged, the croquet balls are live hedgehogs, and the mallets are live flamingos. The various playing cards stand on all fours to form the arches that the balls are hit through.

“If I had a world of my own, everything would be nonsense”

A £1.28 stamp depicts the Game of Croquet, very different from that we are all accustomed to! Alice too has a difficult time adjusting to this curious version of croquet played by the Queen. The croquet ground is ridged, the croquet balls are live hedgehogs, and the mallets are live flamingos. The various playing cards stand on all fours to form the arches that the balls are hit through. Furthermore, the presence of this absurd game of croquet echoes Carroll’s sentiment that everything in Wonderland is absurd and feels like some sort of cruel game.

Talking of games, we are introduced to a “Pack of Cards”. Very unusual than the sorts that we are used in reality, these Playing Cards are characters from Alice’s Wonderland have a human head, arms and legs. They are loyal servants as well as guards for The Queen of Hearts. It is explained in the book that the spades are gardeners, clubs are soldiers, diamonds are courtiers, and hearts are members of the royal family.

“You are nothing but a pack of cards!” 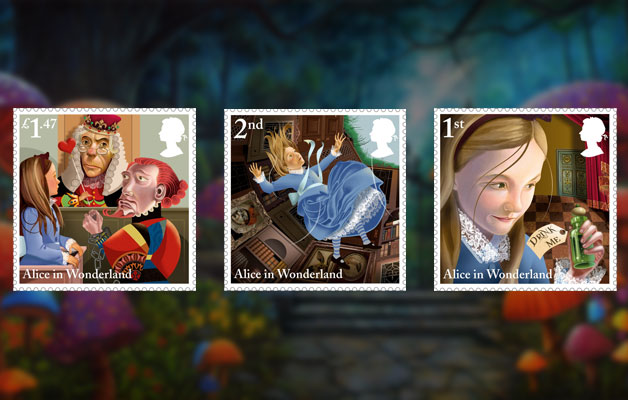 “The Queen of Hearts, she made some tarts,

All on a summer day:

The Knave of Hearts, he stole those tarts,

And took them quite away!”

Travelling through the Wonderland Alice finds herself in tight spots more than once. The last one is the trail where the Knave of Hearts stands trial for stealing the Queen’s tarts. The King of Hearts leads the proceedings, and various witnesses approach the stand to give evidence. One amongst them is Alice, who disapproves of the Queen’s ways of dealing with justice, sentences and verdict. Alice believes the note, a very crucial piece of evidence, to be nonsense and protests the King’s interpretation. The Queen becomes furious with Alice and orders her beheading, but Alice grows to a huge size and knocks over the Queen’s army of playing cards. In all the frenzy, Alice finds herself awake on her sister’s lap, back at the riverbank. She tells her sister about her dream and goes inside for tea as her sister ponders Alice’s adventures. A £1.47 stamp depicts the scene of Alice’s Evidence on it.

“Oh my ears and whiskers, how late it’s getting!”

Alice’s Adventures in Wonderland begins with Alice dozing off as her sister reads to her. Alice nods off into a dream-like state in which she seems to catch sight of a fully dressed white rabbit capable of speaking English. As Alice falls “Down the Rabbit Hole” and our adventure begins. This 2nd class stamp depicts Alice’s fall down the rabbit hole.

Following the White Rabbit, she sees the White Rabbit running in front of her through a long passage and she continues to follow him. But soon loses him and finds herself in a long, low hall, with doors all around it. She tries them, but they are all locked. Then she comes upon a little three-legged table on which a little golden key lies. The key fits in a little door behind a curtain and when she opens it she sees that it leads into a small passage. At the end of the passage, Alice sees a beautiful garden. She really wants to get into the garden, but she is too big to fit through the door. When she goes back to the table she finds a little bottle on it with the words ‘Drink me’ printed on the label. Alice drinks from it and starts shrinking until she is only ten inches high. This 1st class stamp depicts the “Drink Me” potion.

Throughout the story, Alice is confronted with the problem of shifting identity, as well as being confronted with the anarchy and by the cruelty of Wonderland. One of the central concerns of Alice is the subject of growing up — the anxieties and the mysteries of personal identity as one matures. Alice’s final triumph occurs when she outgrows nonsense. At last, Alice takes control of her life and her growth toward maturity by shattering and scattering the absurdity of the playing cards and the silly little creatures who are less rational than she is. The book is very complex and has a lot of symbolism conveyed through the characters and setting. Each character teaches Alice something about life and growing up in a dangerous world.

Just like the book, our blog too separates itself with sequence and direct logic. But its fun to join the pieces together and make sense of the story isn’t it?

“Begin at the beginning, and go on till you come to the end: and then stop”

View all posts by Team Mintage World →
One thought on “Alice’s Wonderland on stamps!”