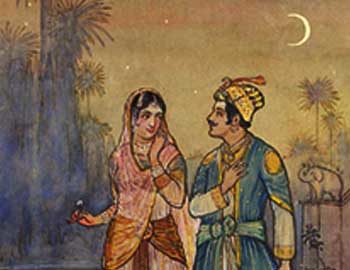 Mirza Nuruddin Beig Mohammed Khan Salim was known in history by his imperial name Jahangir. He was the fourth Mughal emperor who ruled from 1605 to 1627 AD. Among all the Mughal Emperors he was undoubtedly the greatest patron of fine arts and he took a great interest in it. It is said that Jahangir issued gold and silver coins featuring more than 50 varieties of couplets. The unparallel creation of verses and poems in the form of legend graced the ornamental face of the coins; its beauty and meaning were unique in the world.

Jahangir introduced a remarkable variety of magnificent gold Mohurs during his reign. Adorned by his portrait and Zodiac signs, these coins are an excellent example of the evolution of epigraphic/ calligraphy. His father Akbar had also experimented with different portrait designs, including hawks and ducks. These coins are remarkable in their execution & fabric. They are now very few in numbers, as Jahangir’s successor, Shah Jahan withdraw them and melted most of them. 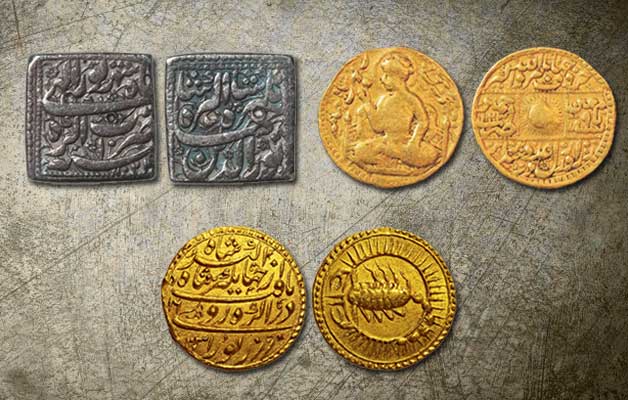 One of the most fascinating designs from his coinage are the issues depicting his portrait, he specially presented them to his favourites. These coins are in the same tradition in which he had earlier issued with the portrait of his father Akbar. He also issued attractive series of coins in silver representing the twelve months. These silver coins of Jahangir are highly sorted after by collectors.

Jahangir was very passionate about poetry. This is very clearly evident from the kind of coins that he issued with wonderful couplets on them. Many instances have been recorded were he has handsomely rewarded those who would recite a good poetry. It’s mentioned in Tuzuk-e-Jahangiri that Noorjahan had once recited a couplet and she received a couplet from Jahangir in response. The verse goes like “Ba hukma Shah Jehangir yafta sad zevar Ba nam-e- Noor Jehan badshah begam zer” which translates to “This gold hath a hundred beauties gained with the inscription of the name of Noor Jehan, the Badshah Begum (Empress)”.

Being someone who loves poetry, Jahangir minted some really soulful couplets on his coins. Some other examples of couplet-types that he issued were: Inayat, Ta Falak, Hamisha, Sakht Noorani, Malik-ulMulk, Feroze, Khusru-e-Giti Panah, Bada Bar etc.  Let’s take a view of these couplets in detail. 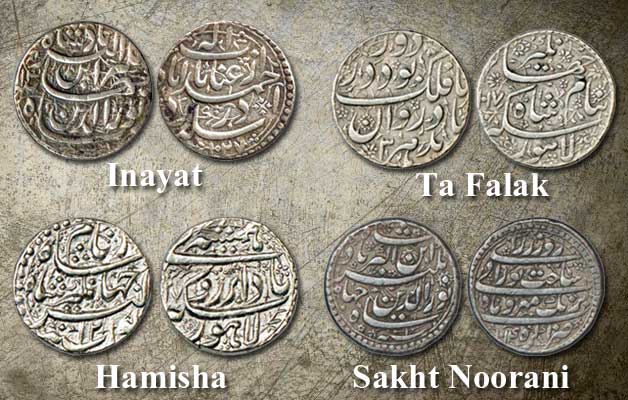 Inayat – An excellent couplet ‘Inayat’ which means blessing bore on the coins of Jahangir is read as:

The translation of this couplet is ‘Struck coin at Ahmadabad, by the blessings of God, Shah Nur al-Din Jahangir, son of Akbar Badshah’.

The heavy weight coins with ‘Ta Falak’ couplet are stuck only from Lahore mint. They are also known as ‘Sawai’ Rupee. The translation of this couplet is ‘In the world so long as the heavens revolve, May current be in the name of Shah Jahangir, the money of Lahore’.

Hamisha- A beautiful everlasting couplet ‘Hamisha’ (Ever) illustrate on the coins of Jahangir is read as:

Translation of the poetry is ‘Ever on the face of the coin of Lahore may there be light by the name of Shah Jahangir, Shah Akbar’s son’. There is another ‘Hamisha’ couplet found on the coins of Jahangir, which he had issued during the reign of Akbar. The coins depicts poetic couplet.

The translation is ‘Like the gold of the sun and moon, may ever rule; in the world’s east to west, the coin of Allahabad’. These issues are generally associated with the Rebellion period of Salim (Jahangir), when he was revolted against his father, Emperor Akbar.

Sakht Nurani: On sitting on the throne, he gave the instruction that all of his gold and silver coins should have the couplet:

Meaning of this couplet is ‘May the face of money shine with the hue of the sun and the moon. Shah Nuruddin Jahangir, the son of Akbar Badshah’. This couplet was composed by Amir ul Umra Sharif Khan.

Muzaiyan: The Rupees of Jahangir that bore the ‘Muzaiyan’ couplet were excellent in their calligraphy and design. It shows how much a lover of art, he was. Meaning of the word Muzaiyan is adorned, embellished, decorate, and beautified. The legend of this couplet is:

The couplet may be translated as: In the name of Nur al-Din Jahangir/struck at Ahmadabad, the beautified city, in the month Shahrewar of the Ilahi.

Shah Noor-al-Din Jahangir son of Akbar Badshah the emperor, refuge of the world, struck coin in the Agra city.

This coin is normally called the “Firoz” couplet type, but Shailendra Bhandare has pointed out that the obverse legend does not say jahan firoz, but rather jahan afroz, with the first letter left out to preserve the correct meter of the couplet. The meaning then is “In Ajmer the gold coin became world-illuminating, by the light of the name of King Jahangir (the son of) King Akbar.”

Shehenshah -e- Umam: This couplet praises the emperor and his reign, giving its connection to his people. Jahangir described himself as ‘Shehensha-e-Umam’ the emperor of the people. The Couplet on the coin reads:

In the month Isfandarmuz the coin at Lahore struck in gold. The Emperor of nation, Shah Jahangir, Son of Akbar Shah.

The last but not the least, a remarkable feature of Jahangir coinage is the association of the name of Nurjahan on a few issues. He was the first Mughal Emperor in India who minted coins with his wife Nurjahan’s name inscribed on them. The verses are:

By the order of Jahangir, gold attained a hundred times its beauty when the name of Nur Jahan, the First Lady of the court, was impressed upon it.

The coins bearing this intrinsic designs and calligraphy with such a deep meaning belongs to the most alluring coinage of the Indian numismatics. The meaning and history behind this metal currency is very rich, these coins have such an attractive quality that it is must to have at least one coin from these series in your collection. It will be a proud moment to be the owner of these poetic coins.

View all posts by Team Mintage World →
2 thoughts on “Passion of the King illustrated: Coins of Jahangir”