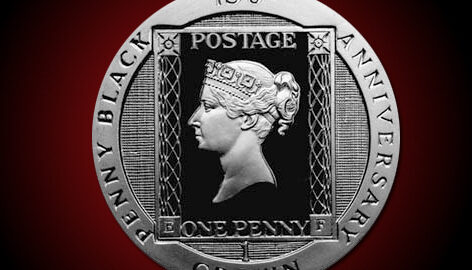 Compared to coins, postage stamps are a very modern invention. Since the first stamp of the world – Penny Black Stamp – postage stamps have long attracted the passion of collectors, including King Farouk of Egypt, Franklin D. Roosevelt, and John Lennon. Until the 1950s, classic collectible stamps were printed. However, the vintage postage stamp on coins has a different kind of charm to them. They add personality and weightage to the collection. No matter however cute and beautiful the modern stamps are; vintage stamps give a character to any collection. The main drawback to a stamp collection is durability. In comparison to a coin collection, stamps are less durable and are susceptible to age and decay. However, the human brain has uniquely conquered this problem and created something durable in nature and attractive in looks. In memory of these monumental moments, many vintage postage stamps have been featured on several world commemorative coins.

The Penny Black is quite a sensation in the world of philately. It is considered to be the oldest postage stamp in the world which was officially circulated and used by the citizens of the UK, almost 175 years ago. Penny Black was the first adhesive stamp issued by Britain in 1840. The stamp showing the profile of the young Queen Victoria made philatelic history and became popular as “Penny Black”. Roughly 68 million stamps were printed, and today they are worth almost 1,800 to 15,000 Euros each, rarer the costlier. 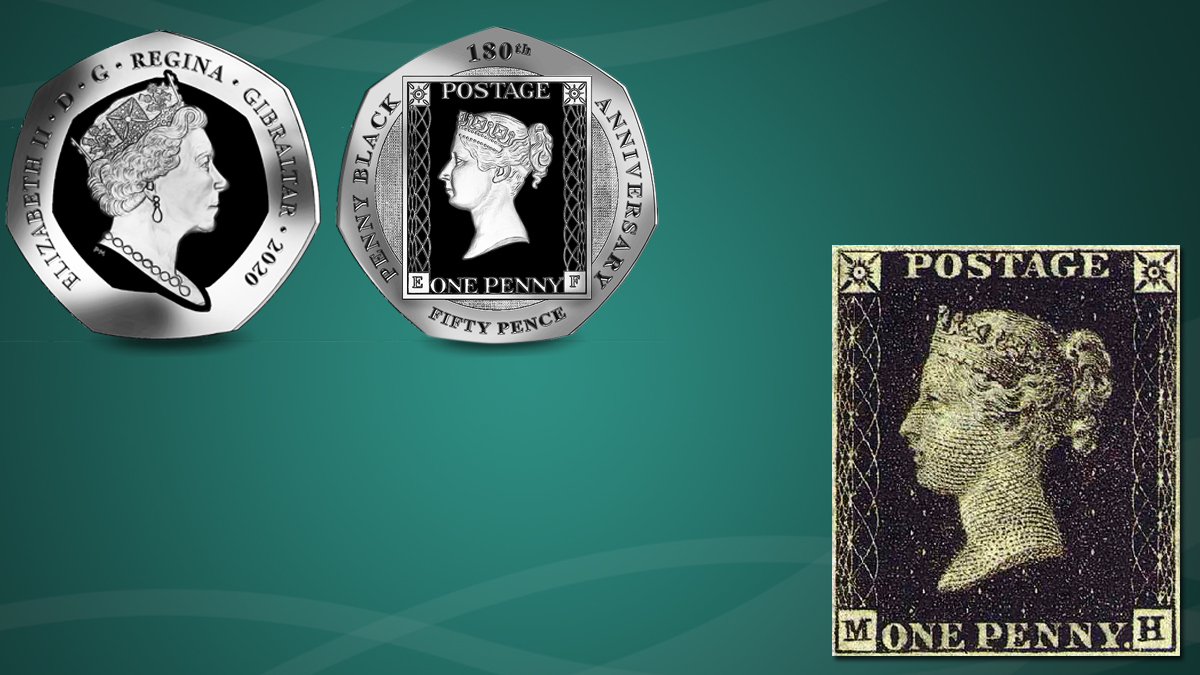 The Penny Black stamp has been a common subject of commemorative coins issued by quite a number of mints worldwide. Penny Black has recently completed its 180th anniversary and to celebrate this occasion, Gibraltar along with Pobjoy mint issued a special Heptagonal coin. It is World’s very first Pearl Black 50p commemorative coin. The reverse of the coin depicts the original Penny Black stamp and the inscription reads Penny Black 180th Anniversary and denomination fifty pence. The obverse of the new 50 pence heptagon-shaped coin features the effigy of HM Queen Elizabeth II.

Though it was not a part of British India Stamps, Penny black is quite popular in India as well and was featured on a stamp commemorating 150 years of Penny Black.

Penny Red succeeded penny Black Stamps and continued as the main type of postage stamp in the United Kingdom. The color was changed from black to red because of difficulty in seeing a cancellation mark on the Penny Black. These Stamps are really rare as there are only nine in the world. Stanley Gibbons has sold is a British Penny Red for 550,000 GBP. 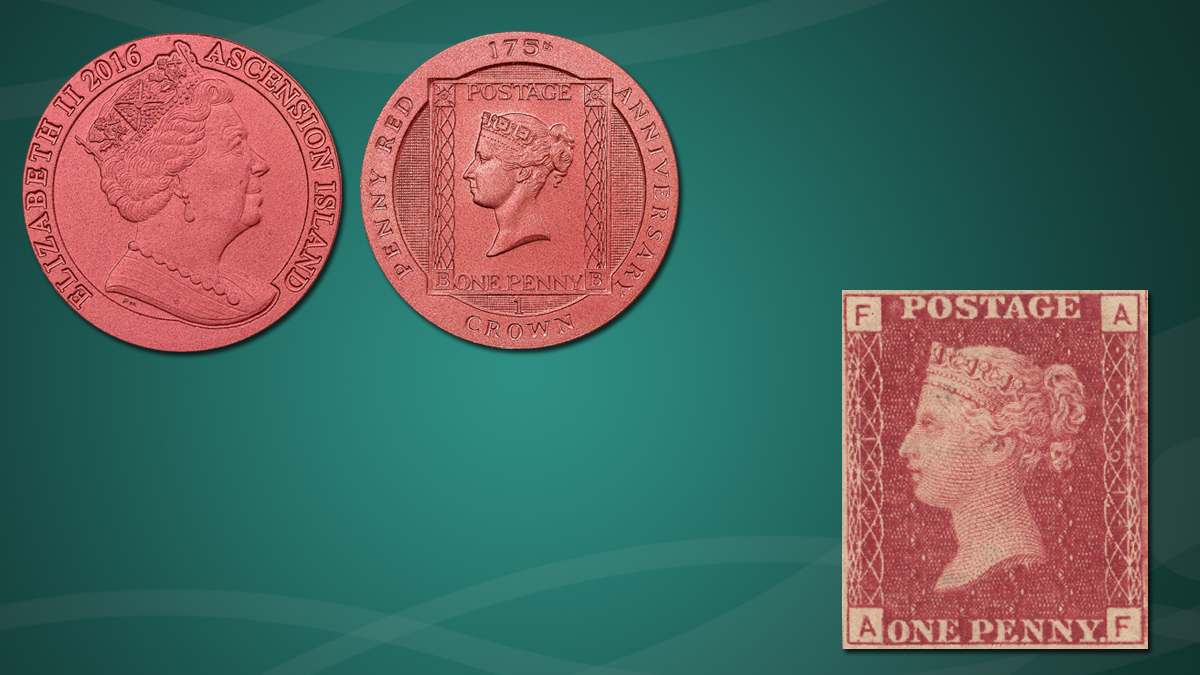 The Pobjoy Mint of the Ascension Islands has released a new coin honoring the 175th anniversary of the Penny Red stamp in the year 2016. The coin depicts the portrait of the Queen on the obverse while the Penny Red Stamp is depicted on the reverse with “Penny Red 175th Anniversary” inscribed around it. The Penny Red Stamp coin now joins this extraordinary series of world-famous stamps on commemorative coins.

In 1854, Western Australia issued its first stamps, featuring the colony’s symbol, the Black Swan. The 1d black was engraved in England. In January 1855 additional 4d stamps were needed but when Alfred Hillman brought the stone out of storage, he found that two of the impressions were damaged, and had to redo them. One of the replaced frames was tilted, and the other was accidentally redone upside-down. 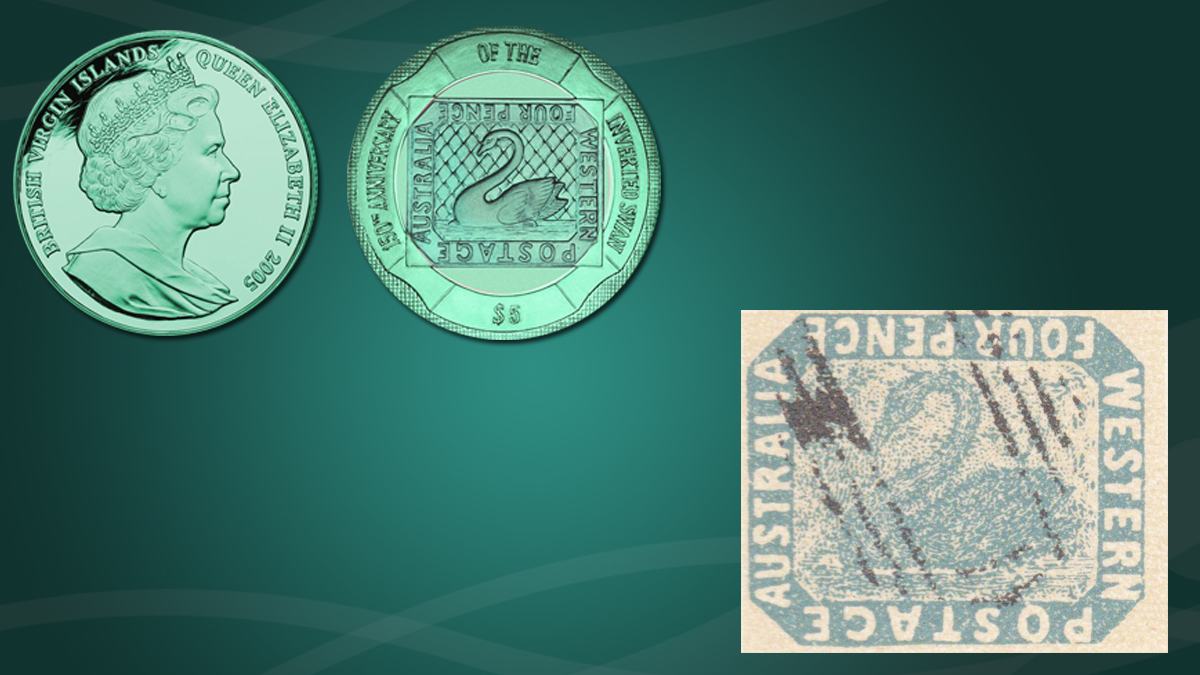 The stone’s block of 60 was transferred four times to make the printing stone, and 97 sheets were printed before Hillman discovered the mistake and corrected it, resulting in a total of 388 errors being printed. The error went unrecognized and unreported for several years and only 15 complete copies have survived with no unused copies known.

British Virgin Island with Pobjoy mint issued the World’s first Turquoise Titanium Bi-Metal and Turquoise Titanium commemorative coins. These unique Turquoise commemorative coins show the color of this rare stamp which is re-produced on these coins. These coins carry a fine effigy of Her Majesty Queen Elizabeth II by Ian Rank-Broadley on the obverse and the engraving of the stamp on the reverse with the denomination 5 dollars and legend “150th Anniversary of the Inverted Swan.

The Mauritius Blue “Post Office” stamps were the first stamps authorized by any British colonial government. Lady Elizabeth Gomm, the wife of the governor of Mauritius, requested the stamps, to mail invitations to her costume ball. The two-penny stamp — Blue Mauritius — is valued in used condition at 1.7 million Dollars. In 2000, the Pobjoy Mint issued the world’s first colored titanium coin to honor Blue Mauritius. 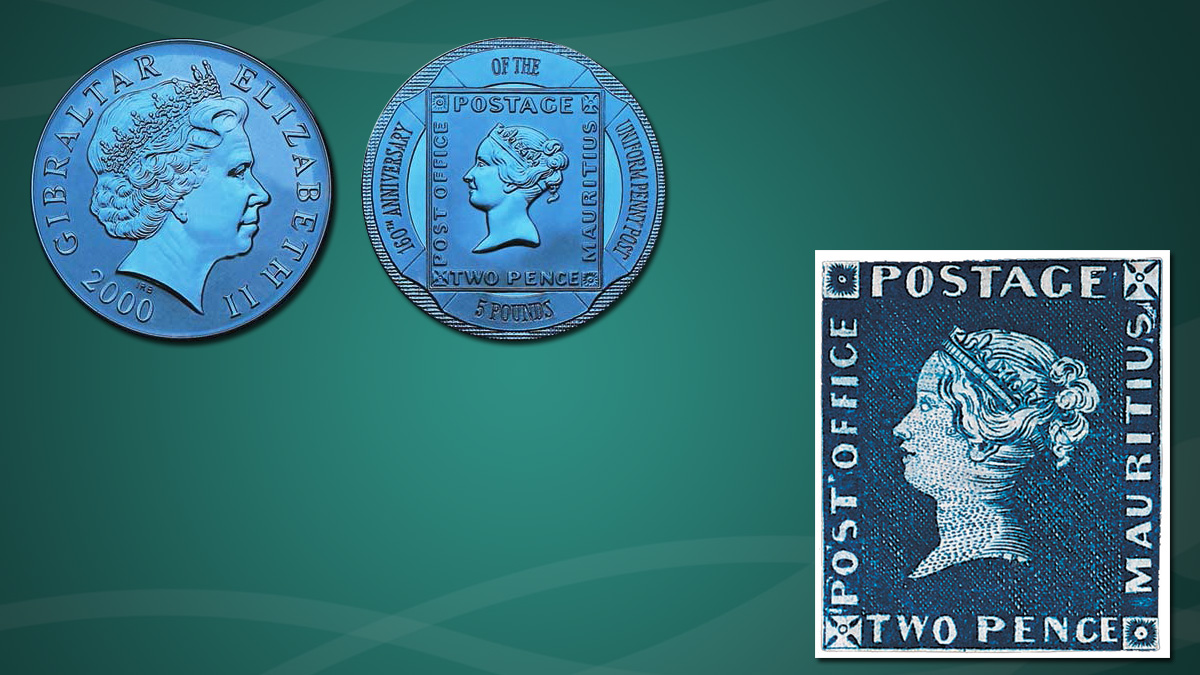 Gibraltar cooperated with the Pobjoy Mint in 2000 to issue what Pobjoy calls the first blue coin in the world. The commemorative coin honors the Blue Mauritius stamp. The 5 Euro coin, issued for Gibraltar, was colored blue through an electrochemical process. This rare stamp is perfectly recreated on the reverse side of the coin, which has been produced with a beautiful and unique Pearl-effect blue finish. The obverse of the coin features an effigy of Her Majesty Queen Elizabeth II by Ian Rank-Broadley.

Commemorative Coins depicting Postage Stamps is a fascinating topic that connects both numismatics and philately. With these special commemorative coins, one can possess a memento of vintage postage stamps that is more durable and beautiful than the original. This is not the end – as we have more for you. Stay tuned for more.