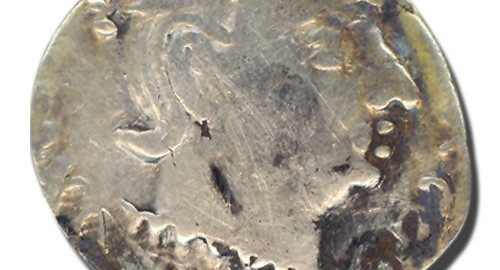 A Coin finds a Collector ! This statement does look enigmatic but in many cases it happens and in my case it is entirely true.

I had spent my childhood in a small town where there were no coin dealers and the hobby was hardly pursued by anybody.

During my school days, going to a temple situated a couple of kilometres on dusty road was part of my daily routine. The last kilometre passed through an old market place which was in dilapidated state and there was hardly any commercial activity as all the shops were shut. Many of those closed shops were in the courtyards of the residential houses. One such shop cum residence had fine murals of peacock in shining bright colours. Though I never had any knowledge about art and its technique – I liked the paintings and never missed looking at those paintings and admiring them. Perhaps, being an art lover is the first ‘requirement’ for a coin collector.

One fine winter evening when I was proceeding to the temple, I stepped on something which made a metallic sound. I was wondering what it could be. Intuitively I bent down to look what made that sound and saw one black piece of metal lying on stony surface. My mother’s instruction of never picking up anything unknown ringed in my ears, but in spite of that ignoring my mother’s good advice and I picked it up and looked at it. I could only see a bust in the fading light. It looked like money. It looked like coin! An Old Coin!

I brought it home and showed it to many friends. There were suggestions to clean that piece by either dipping in sour buttermilk or in tamarind juice or in lemon water. I tried the last option. Now I could see a better part of the bust, and it was confirmed it was a coin. I flipped the coin and on the reverse there were something that looked like three hills, stars and a crescent moon. I was delighted.
One close friend of mine was very excited. He took (lured me) me to his home to have a look at his stamp collections. He showed me some US stamps and persuaded me to barter a foreign stamp with my coin. I agreed and brought a Videshi* item my home. More Delighted!

One day my father was talking about Indian history and ancients coins, about the Western Kshatrapa Rudradaman’s stone inscription in Junagadh, about usage of Brahmi script in those days etc. Eager to know more, I visited a library in a nearby town, lo and behold! I saw an image of a coin resembling mine.

That day a new coin collector was born, and ‘A Coin Found a Collector’!!!
– Bimal Trivedi

View all posts by Team Mintage World →
3 thoughts on “A Coin finds a Collector !”