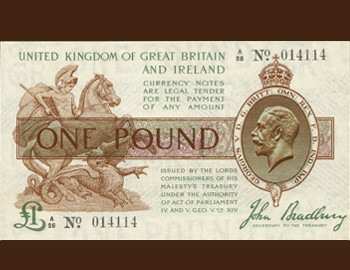 Hi folks! If you’ve been wondering how and why the first treasury notes of England or Bradbury notes came into circulation, it is time to explore a story with a moral “A stitch in time, saves nine”!

World War 1 had serious socio-economic implications, not just on the participating nations, but also countries which were somehow associated with the giants. England was staring at a huge debt and some really devastating economic consequences. Something needed to be done, done real quick! The nation could not afford to sit on this daunting issue for the moment and cry over spilled milk later.

Before the war broke out, gold coins were used for day-to-day transactions. When people started sensing the unrest, they lost trust in the nation’s economic stability and hoarded gold coins. This led to further shortage of coins that affected small payments. Someone had to rack their brains and then Eureka… Paper money or the first treasury notes of England happened! Yes, the government turned to their only saviour.

It was not like paper money was not used by other countries at that that point in time. In Scotland, banknotes were widely in use but England and Wales had issued £5 note which was definitely not a small number for a denomination. It was almost worth more than £400 of today’s time. The common man never dealt in such high value transactions in those days.

The Need for Treasury Notes

To replace gold coins, £1 and 10 shillings paper money was the need of the hour. There was no time for any more delay and the Bank of England was not adept enough to print such a larger number of notes within such a short deadline. The government had to intervene and decided to issue notes on their own. England was soon going to see its first Treasury notes, which was also popularly known as ‘Bradburys‘, as the notes bore Sir John Bradbury’s signature who was the permanent secretary to the Treasury. Another first-time occurrence which took place at that time was that these notes were not issued against any gold deposits. They were used as legal tender and had to be accepted when offered in payment of a debt. 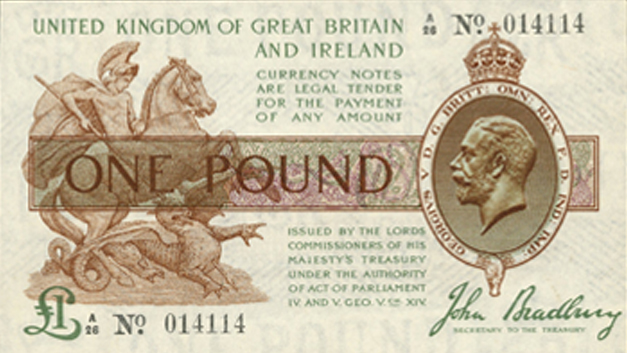 Designers burned the midnight oil to come up with the new designs over the weekend of 1-2 August 1914. The designs were sent to the printer on 4th August, exactly on the same day when Britain plunged into World War 1. The only ready supply of adequate paper available at that time was postage stamp paper and the only engraved vignette they could think of was that of the Royal Mint one. Like they say, when the time comes, you need to beg borrow or steal, England chose to borrow the engraved vignette from the Royal Mint. The obverse design of these 1 pound treasury notes bore the side profile portrait of King George V. St. George slaying Dragon at left, four British emblems: rose, thistle, shamrock, and daffodil. The reverse featured the Houses of Parliament.

From 4th August to 6th August, £2.5m of new £1 notes were printed day in day out. They were distributed to the banks on 6th August and ready to be circulated among the general public on 7th August. Paper notes in a way saved a country of such a stature from an astounding economic crisis. A week later, 10s notes were also introduced which were useful for smaller transactions.

Though the bold yet hasty decision was considered to be fruitful, it had some nasty side effects as well. First of all, these 1 pound treasury notes or Bradbury pounds were extremely tiny, measuring less than 13x7cm, as compared to the large Bank of England £5 at that time. Many addressed these notes as ‘lottery tickets’. Moreover, since the notes were so tiny, they were hard to be handled or counted by bankers.

But as they say, size doesn’t really matter; there was a bigger problem to deal with really. Forgery! Time crunch led to the hasty designs which did not incorporate any effective anti-counterfeiting features. To top it, banknotes were new to the common man, they found it difficult to handle real notes, forget identifying a fake one.

The country also saw a lot of mobility in terms of people, a lot of strangers were moving around which made is easier for anyone to sneak fake notes into circulation. Another interesting case was when advertising flyers were printed in the shape and colour of these notes in 1915. Even these flyers entered circulation as fake notes!

Though nothing was as simple as it looked like, these treasury notes helped England and Wales cruise through the stormy weathers of economic crisis. These currency notes were used widely by the general public until 1928, after which Bank of England started issuing £1 and 10s notes.

All of this goes to show that a stitch in time, might as well save ten.

To know more about notes of India or notes of the world, visit Mintage World.

View all posts by Team Mintage World →
3 thoughts on “Treasury Notes Of England : A Story of a Savior”