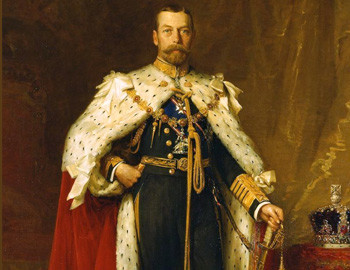 The coronation of King George V took place on 22nd June 1911, but George Frederick Ernest Albert of the House of Saxe-Coburg-Gotha was the unpromising son of Edward VII.

George V was not born to become a King, but his fate had some other plans….

Being third in line of succession, he joined the Navy as the second Royal in 1877, he took his Cursory education at home later he left to join Trinity college in 1882. He wished to pursue the Royal Navy with the intent of making it his career.

After the untimely death of Albert, George left the Royal Navy and assumed his post as the heir apparent and was placed on the throne on 6th May 1910. As the Prince of Wales, George was educated in the state affairs and was given access to the state documents by his father, King Edward VII, as he wanted to prepare his son for his future role as the King.

George and Mary’s coronation took place at Westminster Abbey on 22 June 1911, amongst much zest and festivities.

At the coronation of King George V, he was crowned as the King of Great Britain and Northern Ireland and as the Emperor of India from 1910 to 1936. He accepted responsibility and duty and sought to represent his subjects rather than establishing government policy like his predecessors. His reign saw a rapid change in the political landscapes, both international and domestic, with socialism, communism, Irish republican and Indian independence movement on the rise.

It was in this Durbar that the capital of British India was shifted from Calcutta to New Delhi. A set of six stamps were released to commemorate this event. These were the first British India commemoratives.

In 1917 with anti-German sentiment running high, he changed the family name from Saxe-Coburg-Gotha (popularly known as Brunswick or Hanover) to Windsor, and he also relinquished all German titles and family connections.

King George V was a great stamp collector and spent most of his time pursuing his hobbies of stamp collecting. Because of his status and position, he is considered as one of the most famous stamp collectors of the world.

The day of the coronation of king George V saw the first halfpence and one penny Downey Head stamps issued. The first stamps bearing his portrait were issued on the very day.

Having a keen interest in the subject, his reign saw a many ‘firsts’ for the British stamps, coins, and notes. These includes:

Being the Emperor of many colonies, King George V appears on the coins, notes and stamps of all the British colonies. King George appears on British Indian coins , stamps and notes also.

With the World War I hinting at the horizon London, the world’s foremost financial centre, was hit by a financial crisis. As an effort towards the wartime economy, one of the first acts of the British government was to withdraw gold from the circulation.

With the insecurities of the war, hoarding of gold and silver coin was widespread. Hence to ensure that people still had their cash and legal money in their hands, the government introduced paper money of smaller denominations.

The Bank of England printed a large supply of notes for values of £1 and 10 shillings. To reduce the pressure on the bank the government took to printing the notes. These notes printed by the government came to be called as Treasury notes or ‘Bradbury’s’, after the signature of Sir John Bradbury, the permanent secretary to the Treasury.

‘Try living on their wages before you judge them’

Unlike other monarchs of Britain, King George V had a very distinct personality. He was a very hardworking and a decent person. King George V was greatly admired by his people and he had immense devotion towards Great Britain. Some historians have called him a ‘dull’ man, but it was only because his ordinary lifestyle did not match up to a King’s status. In 1932 he started the tradition of the Royal Christmas broadcast which has continued ever since. He is someone who revived the Philately as a hobby.

After receiving an injection of morphine and cocaine by the royal physician, he died on January 20, 1936. He was succeeded by Edward VIII, who abdicated the throne in just 11 months. King George V’s second son Albert ascended to the throne as King George VI.