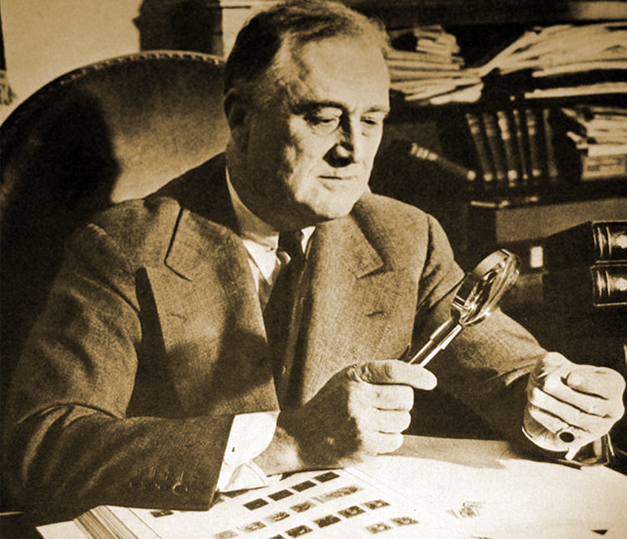 Franklin loved collecting stamps from his childhood days and learned a lot about the world through his hobby. He found solace in his collection during his adulthood when he suffered from polio. Even during his term, he used to feel at peace and relax by looking at his collection for hours.

He along with Postmaster General James A. Farley worked on many stamp designs, colours and themes. He also went ahead and sketched several ideas for stamp designs in 1930s.

Mr Franklin had once stated “I owe my life to my hobbies – especially stamp collecting.” For him it was a means to relax. In his free time he got himself involved in many philatelic activities like joining stamp clubs, purchasing stamps from dealers and in auction, and promoting the hobby by association with stamp shows such as the 1936 international exhibition TIPEX in New York City.

Several countries like the Cook Islands, Monaco, Philippines, Turks & Caicos, and Yemen have issued stamps featuring images of FDR studying stamps with his magnifier for stamp designs. They were released by the White House during the 1930s. When there was chaos all around, this picture rightly showcased how this man put the world together in a cool way.

In 1947, Monaco released a 50c stamp featuring this image but with a design error. His right hand has five fingers apart from the thumb.

In 1946 after Mr. Franklin died, his family sold his entire precious collection for a very impressive price through Harmer Auction. There were some controversies that the actual collection was with the U.S Government. Some dealers bought lots of common stamps and placed them on cards to sell them as souvenirs. Even today, many collectors dream of owning some stamps from his lovely collection. That’s the reason why he is one of the most famous stamp collectors of the world. In 1983, India issued a special commemorative 3 rupee, 25 paise stamp featuring him in his famous pose, lost in his collection of stamps.

There are many other famous stamp collectors like King Farouk I of Egypt, Prince Rainier III of Monaco, Charlie Chaplin, John Lennon, Ayn Rand etc.

No more excuses, there is no better reason to start your journey now and indulge in Philately right Away!  Who knows you could become famous one day and we would feature an article about you!

To know more about stamps of India and stamps of the world, visit www.mintageworld.com