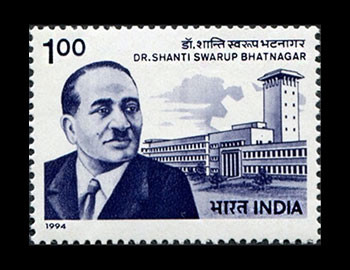 Continuing from where we left last time, let’s explore the works and contributions of some more prominent Indian scientists who have been portrayed on postage stamps.

Father of research laboratories, Sir Shanti Swaroop Bhatnagar (1894 –1955) was one of the most revered Indian scientists and a professor of chemistry for more than 19 years. He was the first director-general of the Council of Scientific and Industrial Research (CSIR) and also the first Chairman of the University Grants Commission (UGC). His researched about emulsions, colloids, and industrial chemistry. His primary area of interest was magneto-chemistry, the use of magnetism to study chemical reactions. He and K.N. Mathur invented the Bhatnagar-Mathur Magnetic Interference Balance in 1928, which was the most sensitive instrument for measuring magnetic properties. He worked on converting sugarcane peelings into food-cake for cattle. He also resolved many industrial problems for major companies. He innovated the technology for drilling crude oil with the use of colloidal chemistry. The Department of Petroleum Research was established under his guidance where various aspects like deodourisation of waxes, increasing flame height of kerosene and utilisation of waste products in vegetable oil and mineral oil industries was studied. He refused to make money out of his research and would promote funding for improving research facilities at the university. Bhatnagar worked on post-independence science and technology infrastructure and policies. The Council of Scientific and Industrial Research (CSIR) was set up under the chairmanship of Dr. Bhatnagar where he established various chemical laboratories in India. A special 1 rupee postage stamp was issued in 1994 featuring this great Indian scientist.

Satyendra Nath Bose (1894 – 1974) was a specialist in quantum mechanics in 1920s who founded the Bose–Einstein statistics and the theory of the Bose–Einstein condensate. “Bosons” was the name given to the class of particles that obey Bose–Einstein statistics by Paul Dirac. He was one among the top Indian scientists to be awarded Padma Vibhushan in 1954. He liked physics, mathematics, chemistry, biology, mineralogy, philosophy, arts, literature, and music and contributed to organized research committees in independent India. His teachers Jagadish Chandra Bose, Prafulla Chandra Ray and Naman Sharma were his inspiration in his early life. He taught at many important universities and set up new departments and laboratories to teach advanced courses for MSc and BSc. In 1924, Bose wrote a paper deriving Planck’s quantum radiation law without the use of classical physics by simply counting states with identical particles – a revolutionary feat in quantum statistics. He sent the article directly to Albert Einstein in Germany who translated it into German himself and submitted it on Bose’s behalf to the famous Zeitschrift fur Physik. Bose later worked in European X-ray and crystallography laboratories with big scientists like Louis de Broglie, Marie Curie, and Einstein. A commemorative 1 rupee stamp was issued in 1994 depicting this brilliant Indian scientist.

Noted biochemist Yellapragada Subbarow (1895 – 1948) discovered the function of adenosine triphosphate as a source of energy in the cell and developed methotrexate for the treatment of cancer- one of the very first cancer chemotherapy agents which is still popularly used all over the world. He lived in the United States for many years. He was one of the top Indian scientists who conducted the synthesis of chemical compounds folic acid and methotrexate for the first time. A fungus genus was named Subbaromyces after him. With Cyrus Fiske, he found the presence of phosphorus in body fluids and tissues. He discovered the role of phosphocreatine and adenosine triphosphate (ATP) in muscular activity. He developed a method to synthesize folic acid, Vitamin B9, based on work by Lucy Wills to isolate folic acid as a protective agent against anaemia. Subbarow also discovered the basis for hetrazan which was used by the World health Organization against filariasis. In 1945, under Subbarow, Benjamin Duggar made his discovery of the world’s first tetracycline antibiotic, aureomycin. His picture was depicted on a 1 rupee commemorative stamp that was released in 1995.

Prasanta Chandra Mahalanobis (1893 – 1972) was an applied statistician known for Mahalanobis distance, a statistical measure. He was among the first few members of the Planning commission of India and made significant contributions in anthropometry in India. He founded the Indian Statistical Institute and designed large-scale sample surveys. In 1931 Mahalanobis with other prominent statisticians established the Indian Statistical Institute (ISI). In 1959, the institute gained respect at the national level. He will always be remembered as one of the greatest Indian scientists and so has been depicted on a 1993 1 rupee postage stamp.

Salient chemist Acharya Sir Prafulla Chandra Ray (1861 – 1944) was also an educator and entrepreneur. Considered as one of the best Indian scientists, he had written 107 papers in all branches of Chemistry by 1920. In 1896, he published a paper on the preparation of mercurous nitrite which was a new stable chemical compound. This work inspired many more investigative papers on nitrites and hyponitrites of different metals, and on nitrites of ammonia and organic amines. He started a new Indian School of Chemistry in 1924. He earned several noted national and international awards and recognition in his career. He also served important positions in universities and institutions. He was also the founder of Bengal Chemicals & Pharmaceuticals, India’s first pharmaceutical company. Apart from research, he also wrote many books like A History of Hindu Chemistry from the Earliest Times to the Middle of Sixteenth Century in 1902. A 15 naya paisa stamp issued in 1961 features this fabulous scientist.

Ruchi Ram Sahni (1863 – 1948) was an innovator, an educationist, a patriot, a social worker who promoted science education in Punjab and was the father of the great paleobotanist Birbal Sahni. In 1914, he researched about the variability in atomic weights of Lead and Bismuth under the mentorship of Kazimierz Fajans at kKarlsruhe Institute of Technology, Germany. He had to leave Germany due to a war scene and had to go to Manchester in the Lab of Ernest Rutherford who was the mentor of Prof. Kazimierz Fajans. From there he published two papers in the field of physical chemistry. Ruchi Ram Sahni has been honoured on a 5 rupees multi-coloured stamp that was issued in 2013.

Stamps don’t just tell a story, they can inspire you as well! Start collecting them and remember to follow your passion with all your heart! Don’t stop until you find answers to all the questions in life that fascinate you.

If you have not yet read the first part of this article, click the below link: