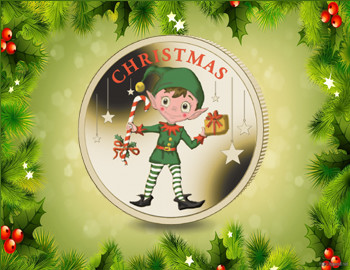 Distant sounds of ringing Jingle Bells are slowly approaching closer and becoming louder. Can you hear them? And these sounds are building up excitement in the air! Just two more days to go for the world’s most popular celebration – Christmas! Time for unwrapping Santa’s goodies, time for decorating Christmas trees, time for fun and frolic! When it’s time to shout out Merry Christmas with all your heart, Mintage World presents some coins and stamps of 2016 celebrating the true spirit of the season!

First up is a cute coloured coin featuring an adorable elf. The 2016 Christmas Elf – Coloured Virenium Medal is struck by Pobjoy mint! Ukraine issued a new coin that celebrates the love for one’s neighbour and Christmas on 12th December. The obverse of the coin depicts Saint Nicholas as the main image. The reverse of the coin features the line “We have come, Saint Nicholas!” in the Ukrainian language and a group of three happy children with toys. Click here to read more about this coin. The Royal Canadian Mint recently released the 2016 $25 Woodland Elf 99.99% Pure Silver Coin featuring an elf, wearing a green hat, coat, pants, fluffy white fur, and brown elf shoes, sitting on a tree stump, building a birdhouse in the forests. Click here to read more about this lovely coin. A beautiful star shaped coloured coin was issued by Perth Mint featuring a burning candle with a red bow, surrounded by a holly wreath. Click here to read more about this coin release. Thinking of wishing that someone special Merry Christmas? Buy them one of these coins for a change this season!

The three gifts of the Wise Men – gold, frankincense and myrrh has been depicted on a 20-ounce gold coin issued for the Isle of Man by Pobjoy Mint! To read in detail about this coin click here. Gregory Kenneth Cameron – a Bishop of the Anglican Church in North East Wales designed a 2016 Royal Mint Coin featuring Magi bringing gifts to baby Jesus.  Want to know more about this coin? Click here! Finland issued a coin featuring the beautiful Northern Lights or Aurora Borealis. Perfectly apt for the dreamy wintery feel of the season! To check out more details about this coin click here! A 50 cent coin with 3D effect showing a closed toy box and wrapped presents as they would appear on Christmas Eve was issued by the Royal Canadian mint. The 100th anniversary of the composition of the Ukrainian Christmas Folk Song, Shchedryk was celebrated on an amazing Ukrainian coin! Isn’t that a wonderful way to wish Merry Christmas by the government to its people?

Latvia issued stamps featuring an elf on a propeller plane with a doll and teddy bear flying over snowy landscapes. Several other stamps have been released by countries all over the world depicting elves and pixies. Sweden’s Christmas coil stamp features an elf wearing a red hat holding a large bowl of porridge. To find out more about Christmas stamps issued by Sweden and Aland, click here. Simple designs have worked wonders like the one issued by Australia featuring a wrapped gift and a star. It took 18 months to design innovative Christmas stamps issued by the Royal mail with paper-cut sculptures.  The stamps depict a “robin redbreast” which is symbolic to the Royal Mail at Christmas. Nativity Forever Stamp by the US features Joseph holding a lantern, Jesus lying in a straw-filled feeding trough, and the star of Bethlehem. Wish your dear ones Merry Christmas by writing them a personal letter and attach these lovely Christmas special stamps along!

May Santa fulfil all your wishes; may your stamp, coin and note collections keep growing to your satisfaction!

Team Mintage World, wishes each and everyone Merry Christmas!