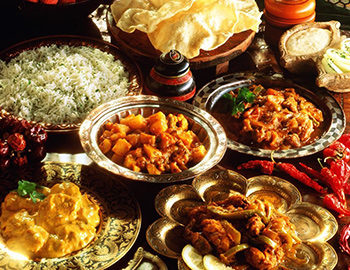 Encompassed with the wide variety of savouries, the vast and diverse land of Indian peninsula has an enormous number of different cuisines that reflect its rich culture. Indian cuisine is the combination of regional and traditional delicious. The flow of travellers from the neighbouring and far-off lands had bought their own surprising change to the Indian food culture, making it more enduring and tasty. The history of various groups and cultures interacting over the sub-continent is impressively reflected through the different varieties of food prepared here. The modern Indian cuisine what we see today in all corners of this land is diverse in its flavour, culinary and dietary forms. Indian cuisine on stamps is the outstanding example to represent the influence of food tradition in India beautifully.

The cuisine tradition of Indian is considered as the most diverse around the world, due to its characterized, royal and crafty use of spices. The major part in developing this spectrum of diverse cuisine is the religious and cultural beliefs, this factor has revolutionised and influenced the food preparing method. The different cuisine type we know today in India is still evolving due to the interacting of Indian society with different international societies

To make it simple and easy to understand the difference in this diverse up yet stagnant Indian cuisine, we have to summarize them in four categories and is represented through different Indian cuisine on stamps issued by the India Post in 2017.

Any type of dish or food that is prepared heavily depends upon the availability of the raw materials and the flourishing trade of the region. The major factors that play an important role in the type of cuisine also depend upon the climate, cookery tradition and practices with the cultural diversity. When we talk about regional Indian cuisine, it includes will and wide assorted of dish and cooking techniques unique to the region. This dish may be known in the different region, but the preparation method is different. These factors also reflect upon the ethic and diverse demographics of the Indian sub-continent.

In the above show image a stamp illustrates a melting pot of biryani, it’s a royal quench for watering mouth bursting with different flavours. It’s an evergreen dish that is offered in mainland India in different cookery patterns.

There are many legends related to the origin of biryani, the world was originated from the Persian word Birian. From the conquest of Turk-Mongol conqueror, Timur to the Tamil literature around 2nd CE as ‘Oon Soru’ briyani has found its references everywhere. One can call briyani the crown jewel of the non-veg Indian cuisine.

This super dish is found in Kerala, Tamil Nadu and Sri Lanka; it was developed in the Indian subcontinent and most favourite dish for breakfast and dinner. Appam of southern Indian finds in different variation to suit the alteration added to it.

It is known as appam, appa, aapa, aappam, chitau pitha, paadu and gulle eriyappa in Malayalam, Tulu, Tamil, Sinhala and Oriya. It is also called Kodava and arpone in Burmese. In the above-shown image, the second stamp depicts a fashioned with a delicious image of Baby Appam.

Dal Bati is a Rajasthani classical dish favoured for its simple and tasty flavour, it’s a culinary jewel is consumed, enjoyed and represents the traditional cuisine of the region. In the above-shown image, the third stamp depicts a delicious served dish of dal Bati, issued by India Post in 2017. The similar dish is also served in Bihar called Litti Chokhha.

According to the popular opinion, all the famous street food of India comes under the popular cuisine categories, but this analysis begs to differ. Because the so-called popular cuisine of India is so common through the sub-contents that the origin of these dishes are hard to connect.

India Post highlights six types of popular dishes through its stamp from which we ill be covering three of this famous dishes.

Panipuri is found in every corner and lane in India. It is a popular cuisine that Indians eat with great Interest. It’s a culinary chaos of flavours will burst on your tongue with a spicy and crunchy wonder. India Post has issued a commemorative stamp in 2017 to dedicate this popular dish on its stamp.

One can trace the origin of Panipuri to Mahabharata, it also connects to the ancient kingdom of Magadha. Over the years, Panipuri evolved and underwent many changes. These changes took place because each region developed this delicacy according to their taste.

Each and every corner of India is well aware with the dish called idli and dosa. The birth of these dishes is subjected to debate among food historians. Its major connections can be found in Tamil Nadu and Karnataka. India Post issued a commemorated stamp and miniature sheets to illustrate this famous south Indian dish. Today we eat these delicious dishes with the different variations, yet the basic or authentic making and flavours of Idli and Dosa remained the same.

Vada-Pav is a dish that brought revolution; it is the combination of common Indian and foreign ingredient. The making of the Vada is Indian but the paw came to Indian from the European influence in the early modern period. It is affectionately called the snack for the commoners. The above image features a stamp showing a well-served dish called Vada-Pav, India Post illustrates this stamp to commemorate the Popular Indian cuisines.

India is known as the land of festivals, we can proudly say that we celebrate a festival every month. So it should surprise anyone that we have a special range of cuisine for these special occasions. The preparation of these dishes requires special and authentic techniques. The amount of dishes prepared all over Indian for the similar festival is different in different regions. India Post has depicted six types of festival Indian cuisines they are malpua, Pongol, Motichur laddo, Gujhiya, seviyan and thekua but we are going to discuss only the three of these dishes.

Malpua is the classical sweet dish of India, which is known, since the age of the Vedas. This oldest crunchy, soft and sweet course dipped in the sugar syrup is enjoyed by every single Indian. India Post has issued a beautiful stamp depicting a malpua in silverware. This dish is like a small deep fried pancake that is soaked in sugar syrup.

The indispensable dish of Eid is Seviyan. The cultural and traditional trace of Seviyan is less uncertain. It is recorded by Marco Polo when he visited the Far East. In India, the use of this vermicelli is different, may be due to the colourful cutlery practice in India. India Post issued a stamp, seen in the above image to commemorate this delicious sweet dish.

The classic Tamil dish and a symbol of south Indian cuisine are Pongal. This dish became popular in 200 CE when ‘Indravizhya’ festival, celebrated at Poombuhar came to be called as Pongal. In the above-shown image depicts the stamp issued by India Post to celebrate the festive cuisine of India in 2017. This dish is cooked in various variants like the Prasadam served in a temple called Chakkara Pongal, Venn Pongal – the white Pongal as a breakfast special, Melagu as a spicy variant and Puli Pongal, a speciality made with tamarind and served at dinner.

The tradition of offering in the temple is as long as the memory of human civilization and urbanisation.  Some of the dishes which are part of this cuisine have a very lasting history and influence of all the factors that help in developing a dish.  The recipes followed by the temple or any religious place remain the same for many years or generation to sustain the authentic nature of the dish. These dishes are cooked on a very large scale and high quantity. India Post has assigned six such dishes on the stamps, they are Modak, Mahaprasad Rice & Dal, Chappan Bhog, Peda, Sandesh and Tirupati Laddoo.

The vast range of delicacy that is offered in the Puri temple to Lord Jagannath and to Sri Krishna in Mathura is called Chhapaan Bhog. These both events take place on the day of Goverdhan Puja celebrated the next day of Diwali. Chhappan Bhog means 56 foods offering, the dishes included in this Prasada change from region to region, but the number of dishes remains the same. The dishes that are prepared have their own tale to tell from its origin to its place in Chhappan bhog.

The cuisine is the speciality of a region which finds its flavour into the daily life. To promote the cuisine of India, India Post has issued a commemorative stamp depicted Chappan Bhog in the above-shown image in 2017. It is one of the finest examples of Indian cuisine on stamps.

Sandesh has been called the emblem of Bengaliness according to food historian Taylor Sen. It is a power packed the punch of taste and reflects the rise of the Bengali renaissance with the European influence. Traditional Sandesh is made for Chenna, an extract from curdled milk. To celebrate some of the traditional cuisines of India, India Post issued a commemorative stamp in 2017. In the above-shown image, this stamp is featured, it is the part of the Bhog Prasad miniature sheet.

In modern India, one can find many types of fission and fusion is Indian cuisine which is influenced by the continental and other Asian cuisines. The influence of the European traditional food has also influenced the various parts of Indian cuisine. All this influence is very authentically Indianized to the Indian standards of taste. India since the time immemorial had a rich collection of spices which not only flourished its trade but enhance the food traditions. Every dish that came to this land was accepted and transformed according to the different needs and taste of the regions. In all the states of India, one can find the same dish, but the preparation method is different so the taste is different. One can take the example of biryani, every state makes this dish in its own unique ways. Indian cuisine on stamps is a way is the mirror of the diver culture of India and one can accurately the different phases of Indian tradition through its food culture through these stamps.